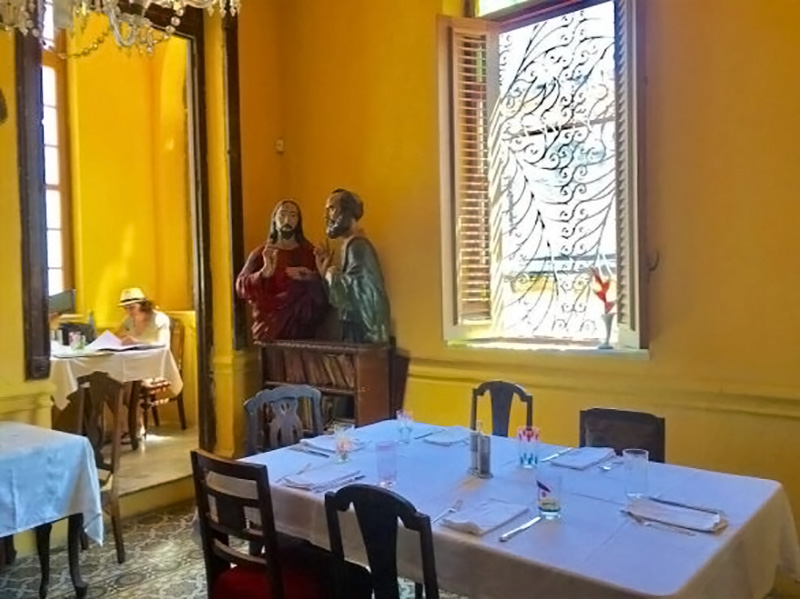 The foodie scene in Havana is changing rapidly. Since the 90s, private enterprise restaurants known as “paladares” have been growing and creating increasingly innovative dishes. These eateries can consist of a couple of seats in someone’s private home to large venues. These paladares are helping Cuban food regain its reputation for fine cuisine and ensuring that you can now get some delicious meals throughout the city.

Cuban food has an interesting pedigree.

When the Spaniards arrived in Cuba in 1492, they brought with them their livestock and cooking methods. The native Indian population had their own ingredients including sweet potato, guava and corn. These two cultures blended their culinary traditions.

Shortly thereafter, Africans, who were brought over as slaves, contributed their own influences like okra, Guinea hen and plantains. Waves of French immigrants, fleeing from the Haitian Revolution, flooded Cuba in the early 19th Century bringing their own culinary influences.

This melting pot of rich culinary traditions was further enhanced with the arrival of over 150,000 Chinese who came to Cuba as contract workers to labor in the sugar cane fields. Many overstayed their contracts and further contributed their cooking methods and ingredients.

With this multi-ethnic foundation, how can Cuban food be anything but extraordinary!

What emerged from this blending of cultures is a cuisine that is not spicy but certainly not bland. The foundation of many Cuban dishes is Olive oil, garlic, parsley and onion. It is flavorful and, when done right, delicious.

The classic, traditional dish is “lechon” or roast pork. Any Cuban celebration or festivity is likely to feature this dish. Although eaten any time of year, it is especially popular during Christmas Eve, called “Noche Buena” accompanied by seasoned black beans, white rice, fried plantains and yuca, a starchy tuber served with garlic and oil.

Herein is a curated list of the best places to have a classic Cuban meal in Havana.

Like many paladares, San Cristobal started out in the owner’s turn-of-the-century living room. The business grew and expanded to fill his entire home, which he filled with unusual decorations like an altar from the local Afro-Cuban religion, Santeria.

This is the restaurant where U.S. President Barak Obama had lunch in when he came to Cuba. Among the restaurant’s decorations is the glass the President drank from, encased in glass.

Paladar San Cristobal specializes in traditional Cuban food with a modern flair. The goat stew is a house specialty and will melt in your mouth.

I don’t know what is more interesting about La Guarida.  The bizarre entryway is through a housing complex where the residents are hanging clothes and up a rickety spiral staircase.  The location is where they filmed Cuba’s most famous movie, “Strawberries and Chocolate”. The interior decor is a wonderful mish-mash of eclectic art, tropical colors and traditional turn-of-the-century Cuban influences. There is a rooftop with wonderful views and a salty sea breeze where you can have a drink and a snack.  Lastly, the food is just outrageously good. Mostly Cuban food but also some international cuisine.

It is a bit pricy by Cuban standards and very difficult to get a table. Reservations are a must, and even then, it will be a challenge to have a meal here. But it is worth the trouble to visit here when you travel to Cuba.

Doña Eutemia was voted one of the best 101 restaurants in the world by Newsweek in 2012.  And well deserved!

One of Dona Eutemia’s charms is its location, the middle of Old Havana on a side street off Plaza de la Catedral (Cathedral Square). Havana’s most iconic sight, the Havana Cathedral is right around the corner so the paladar makes a great stop for lunch or dinner as you continue sightseeing.

The food is classic Cuban and reasonably priced. It is difficult to get a table and, last time I was there, they were not taking reservations. Quiet a conundrum! My best suggestion is to try to get a table during off times. We showed up at 2:30pm, after the lunch crowd and before the dinner rush, and were seated. You won’t be disappointed with a meal here.

El cocinero is the only one of the five paladares that is outside of Old Havana, in the Vedado neighborhood west of Havana.  It is located inside a restored cooking oil factory. The food is excellent with flashes of nuovo cuisine with Cuban fundamentals.

El Cocinero’s great advantage is that its neighbor in the restored factory is the renowned Fabrica de Arte Cubana, or Cuban Art Factory, F.A.C. for short.  The word “unique” is tossed around with careless abandon but in this case, it is totally justified. The F.A.C is unlike anything you’ve ever experienced; three massive floors of art exhibits, music, cinema, dance theatre, everything art all the time.  There is nothing like this anywhere in the world.

It makes sense to have dinner at El Cocinero then head to the F.A.C. for an unforgettable evening. Doors open at 8pm at the F.A.C. but the line to get in starts forming around 6:30. Call for hours to both the F.A.C. and El Cocinero as they change frequently.

This paladar sits in the middle of the street it was named for in Old Havana. Los Mercaderes Street is one of the busiest and most interesting streets in Old Havana, connecting two colonial squares, Plaza de la Catedral to the north and Plaza Vieja to the south.

The daily specials (menu del dia) at this paladar are among the best in the city offering traditional Cuban fare at reasonable prices. If you’re lucky, you’ll have a meal there when the musicians are playing. A real treat in historical Old Havana!

Over the past decades Cuba has experienced hardships and the scarcity of key ingredients which contributed to a reputation of bland food and indifferent service.  Despite this, the chefs of Cuba have continued to innovate. Cuban-American chefs are leading culinary tours to Cuba and new paladares continue to crop up around the city like mushrooms.  Havana restaurants are attracting international attention and are worth a try when in this fascinating city.

About the Author : Talek of Travels with Talek

Talek Nantes is an author, digital content creator and founder of the travel blog, Travels with Talek. She is a passionate travel enthusiast and enjoys sharing her travel experiences with others.  Talek’s personal and professional background have led her to travel to over 110 countries. She has lived and worked throughout the world and speaks several languages.  Talek has an MBA and a Masters Degree in International Relations from the University of Pennsylvania.  She lives in New York City and Miami. Talek’s most recent book is “Don’t just travel to Cuba, experience Cuba: The ultimate Cuba travel guide.” Find Talek on Twitter @TravelswithTalek

1 thought on “Where to eat in Havana, Cuba”

This website uses cookies to improve your experience while you navigate through the website. Out of these, the cookies that are categorized as necessary are stored on your browser as they are essential for the working of basic functionalities of the website. We also use third-party cookies that help us analyze and understand how you use this website. These cookies will be stored in your browser only with your consent. You also have the option to opt-out of these cookies. But opting out of some of these cookies may affect your browsing experience.
Necessary Always Enabled
Necessary cookies are absolutely essential for the website to function properly. This category only includes cookies that ensures basic functionalities and security features of the website. These cookies do not store any personal information.
Functional
Functional cookies help to perform certain functionalities like sharing the content of the website on social media platforms, collect feedbacks, and other third-party features.
Performance
Performance cookies are used to understand and analyze the key performance indexes of the website which helps in delivering a better user experience for the visitors.
Analytics
Analytical cookies are used to understand how visitors interact with the website. These cookies help provide information on metrics the number of visitors, bounce rate, traffic source, etc.
Advertisement
Advertisement cookies are used to provide visitors with relevant ads and marketing campaigns. These cookies track visitors across websites and collect information to provide customized ads.
Others
Other uncategorized cookies are those that are being analyzed and have not been classified into a category as yet.
SAVE & ACCEPT
177 shares