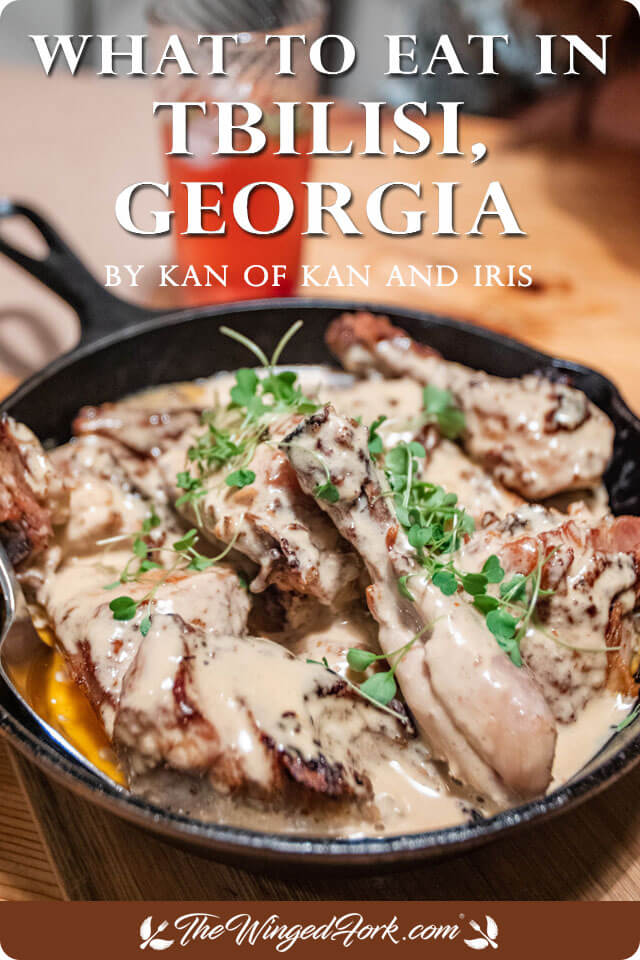 Georgia (the country, not the state) boasts some of the most underrated travel destinations in the world. A big part of that is food. After travelling for a month in Turkey, we were weighing up whether to head to Europe during the peak of summer (expensive!) or to wait another month before it cools down and so do the prices.

We opted for the latter and picked Georgia on a whim to bunker down and relax after weeks of non-stop travelling. Suffice to say, we were blown away at how amazing it was. Cheap but delicious food can be food all over, amazing and delicious. In its capital, Tbilisi, there was no shortage of amazing things to eat.

To find out what you should eat, check out below!

Ahh Khinkali. You had us swooning since day 1.

Likened to soup dumplings (although, don’t say that to a Georgian), khinkali’s are mega-sized versions of their more petite Chinese cousins.

Originating from the Georgian mountains, khinakli’s come in a variety of fillings ranging from minced beef to lamb to mixed with onions, chilli peppers, salt and cumin.

To eat these, we recommend you take a nibble off the skin and drink the piping hot soup. Then, using your hand, grab the “knob” where the pleats are, and take your bites from the side before discarding the top. Ironically, the use of utensils to eat khinkali is considered childish or incorrect.

So do as the Georgians do when in Georgia!

While Khinkali has Asian appeal to it, khachapuri is more tailored to those who have a western palette.

These are boat-shaped bread filled with sulguni cheese before being baked. Upon taking it out of the oven, a raw egg is cracked on top and you’ll need to be fast with swirling the egg with the cheese until it becomes this hypnotising swirl of orange and yellow.

Each region has its own variation of khachapuri and some may even add vegetables, meats or legumes.

These are a slow-cooked thick meat stew usually with tomatoes, spices and other herbs such as coriander, a very common ingredient in Georgian cooking. Surprisingly, this is an adopted dish in neighbouring Ukraine and has now become a well-loved dish featured in many Ukrainian homes.

These often include rice inside for a more filling option.

This is a beloved Rachan dish that we had many times during our time in Georgia. Roast chicken in a clay pan of creamy, garlicky goodness. This is the ultimate comfort food and a winner in winter and to be honest, any time of the year. To be honest, we never had a bad shkmeruli anywhere in Georgia.

This is another fantastic Georgian soup that goes down well and an (in)famous hangover cure. Pieces of chicken, onions, egg, flour, vinegar, bay leaves, and coriander give the soup a sour, tangy flavour that’ll wake you right up. I personally ordered this wherever I can and noticed there were different versions

Pkhali comes in an assortment of styles but in essence, are cold vegetarian appetisers. Usually made with walnuts, eggplant or peppers, the vegetables are boiled before being grounded into a paste and mixed with herbs before being finished off with pomegranate for a bit of added colour of acidity. These were great starters to all of our meals and are a staple of Georgian meals.

Where to pkhali in Tbilisi – anywhere!

Souvlakis. Kebabs. Grilled meats. BBQ. Call it what you want but having meat on skewers on open flame is always going to taste good and Mtsvadi / Sashlik is no exception. Usually, either served as pork or chicken, seasoned with salt and an array of Georgian spices depending on which region you’re in. These are always reliable and a great addition of protein to your meals.

You’ll see these sausage-shaped sweets hanging everywhere in Tbilisi whether it’s at the markets, by the roadside or even in restaurants. If you’re a fan of nuts and dried fried, then this is a fantastic snack to take around with you given its abundance and convenience for eating.

It’s essentially walnuts covered in grape molasses before being hung to dry. It reminds us a lot of our childhood in Australia eating roll-ups which are dried fruit that’s been processed before being flattened to eat. We always had one handy with us on long road trips.

Where to eat churchkhela in Tbilisi – any of the local markets

Not a food but how can you leave out Georgian wine?

Georgia is considered the cradle of wine-making using giant clay jars called qvevri. There’s evidence of wine-making dating all the way back to 6,000 BC where these were believed to have been buried underground during the winter to turn grape juice into wine. Acting as insulation from the elements, the Georgians could use this to control the temperature and the quality of the wine.

Given the micro-climates across the Caucasus region, Georgia is the perfect place to sample many of the hundreds of different grape varieties they have to offer.

This is only the tip of the iceberg as Georgia has very distinct regional cuisines unique to a particular area. We spent a month there and could easily have spent a few more just exploring the culinary landscape.

If you’ve been to Tbilisi, tell us where your favourite places to eat are?

Kan & Iris are two Australians who have a love for food and design. They spend most of their time in Asia, the Middle East and Europe. After travelling for over a year, they found the information online repetitive – the same places to see, eat and do. Frustrated with this, they took matters into their own hands, spending long periods in one place and exploring deeper to uncover some of the best local restaurants, artists and businesses. They’ve recently launched their blog at the start of 2020 to share their findings, focusing on alternative places to eat and explore. Follow Kan and Iris on Facebook, Instagram and Pinterest

This website uses cookies to improve your experience while you navigate through the website. Out of these, the cookies that are categorized as necessary are stored on your browser as they are essential for the working of basic functionalities of the website. We also use third-party cookies that help us analyze and understand how you use this website. These cookies will be stored in your browser only with your consent. You also have the option to opt-out of these cookies. But opting out of some of these cookies may affect your browsing experience.
Necessary Always Enabled
Necessary cookies are absolutely essential for the website to function properly. This category only includes cookies that ensures basic functionalities and security features of the website. These cookies do not store any personal information.
Functional
Functional cookies help to perform certain functionalities like sharing the content of the website on social media platforms, collect feedbacks, and other third-party features.
Performance
Performance cookies are used to understand and analyze the key performance indexes of the website which helps in delivering a better user experience for the visitors.
Analytics
Analytical cookies are used to understand how visitors interact with the website. These cookies help provide information on metrics the number of visitors, bounce rate, traffic source, etc.
Advertisement
Advertisement cookies are used to provide visitors with relevant ads and marketing campaigns. These cookies track visitors across websites and collect information to provide customized ads.
Others
Other uncategorized cookies are those that are being analyzed and have not been classified into a category as yet.
SAVE & ACCEPT
88 shares