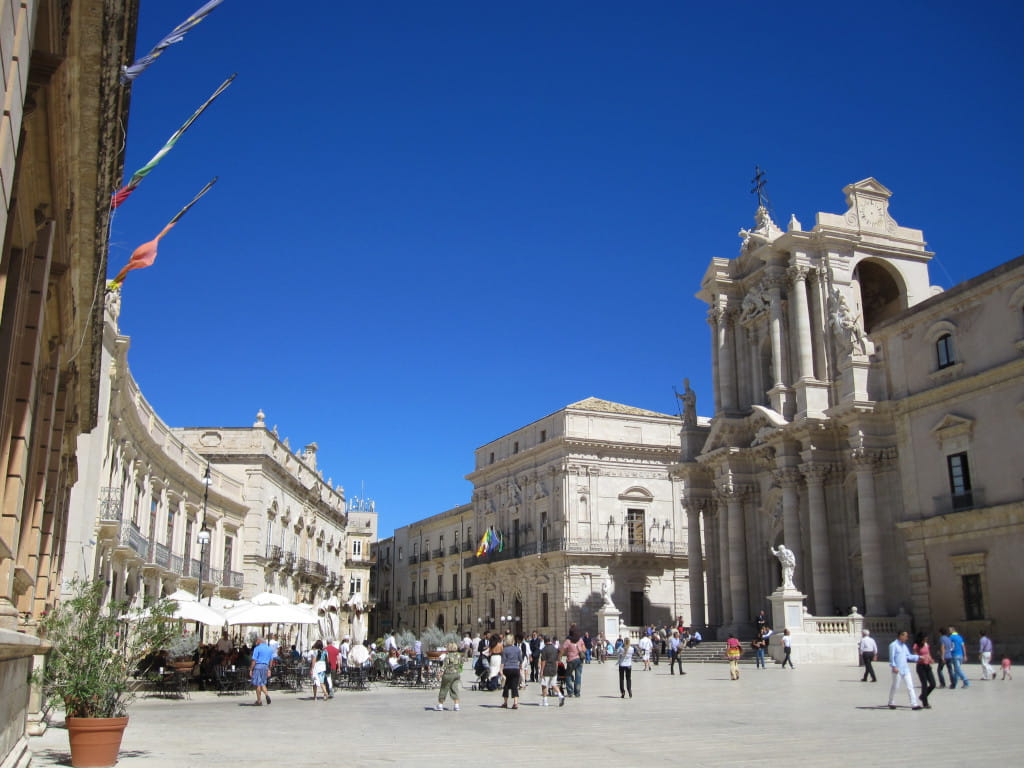 The Italian island of Sicily has a long history of invaders, dating back some 2,000 years – Greeks, Romans, Normans, Spanish, Arabs – the list is seemingly endless. With each influx of visitors came a new cuisine which was absorbed into what has become a broad spectrum of flavours, colours and textures today.

Some dishes in Sicily are local to a particular part of the island, such as the chocolate of Modica, while others are can be found throughout Sicily – caponata being the most well-known, but each region offers its own particular take on the dish.

Another feature of Sicilian cuisine is its reflection of the island’s poverty. Aubergines, beans and offal (animals’ intestines) were frequently used as replacements for meat. While Sicily is not as poor as it once was, these foods continue to feature frequently on menus across the island.

Sicily’s capital Palermo is well known for its street food and it is here that you will often come across offal in various forms. If that is not your thing, fear not, you will also find the usual fare – pizza by the slice, ice cream, biscotti – there is something on the streets of Palermo to suit even the most restrained palette.

While it is well known that tomatoes, olives and grapes are grown in abundance in Sicily, it might come as a surprise to discover that sections of the interior of Sicily are covered in wheat fields. If you visit the island in springtime, the hinterland is awash with vivid hues. Unlike the parched landscapes often associated with the island, the wheatfields are green and lush.

Sicily’s most familiar dish is caponata. This vegetable stew is based around the aubergine (eggplant) – a vegetable which traditionally was used in Sicily as a cheaper alternative to meat. The other mainstays of the caponata are tomatoes and onions along with garlic, celery, vinegar and a mix of herbs. After that, each region, or indeed each household, will add variations – raisins perhaps as a nod to the Arabic heritage or olives reflecting a Greek influence. It’s worth taking a Sicily road trip to fully get to grips with this mainstay of the island’s diet.

Sticking with the aubergine, this dish of macaroni pasta comes in a tomato-based sauce with fried aubergine, salted ricotta and topped with basil.

These typical Sicilian snacks are perfect if you are on the go – tasty balls of rice encasing a centre of cheese and then deep fried in breadcrumbs and topped with a ragu meat sauce.

Sicily is not that far from North Africa so it is no surprise to discover that the Arabs paid a visit to the island and brought their cuisine with them. In western Sicily, seek out couscous alla trapanese – which consists of couscous and seafood in a tomato-based sauce.

With another nod towards her North African neighbours, Sicily’s other well-known pasta dish is sardines with raisins and pine nuts. This delicious primo piatto also includes anchovies and fennel and is served with bucatini pasta – a thick, hollow type of spaghetti (tricky to suck up as you just end up sucking air through the hole!).

Swordfish rolls, or involtini di pesce spada, is another dish employing raisins and pine nuts, this time wrapped in a swordfish fillet along with breadcrumbs, garlic and herbs. Sardines are often served this way too.

You will find fava beans (or broad beans as they are also known) in pasta on many menus in Sicily but they are most well known for their inclusion in this tasty soup. Maccu is a simple soup with fennel as its other main flavour source.

Popular on the streets of Palermo, pani ca’meusa translates as bread with spleen. The spleen is usually topped with a grated cheese, caciocavallo.

These delicacies are another popular staple of the Palermo street scene. Skewers of lamb’s (or chicken’s) intestines – stigghiola are grilled and served with a squeeze of fresh lemon juice.

Sticking with street food but moving on to something with perhaps a broader appeal, pane e panelle is a simple bread sandwich containing savoury pancakes made from chickpea flour.

This guide would not be complete without referencing Palermo’s street food take on pizza. This version offers a thick doughy base with tomato sauce and perhaps a local cheese such as caciocavallo sprinkled on top.

Modica is located in the Val di Noto, a region of south eastern Sicily. Here, you will find a rather unusual chocolate shop, Antica Dolceria Bonajuto where delicacies include chocolate and meat wrapped together in pastry (more delicious than it sounds, I promise). What makes Modica’s chocolate unique is its grainy texture, produced by melting the sugar at a lower level than usual which stops the sugar crystals from melting.

Granita is to Sicily what gelato is to mainland Italy. Made from sugar and water along with a particular flavour, this dessert is a refreshing alternative to ice cream or sorbet. Flavours vary from region to region – coffee in Messina, pistachio in Catania. However, if you are planning a Sicily beach holiday in the summertime, lemon granita is without doubt the most refreshing.

If you’re visiting Sicily with kids, be sure to try these delicious sweet treats. Cannoli are essentially tubes of fried pastry piped full of sweet ricotta. There is usually a topping of crushed pistachio or chocolate. It is essential to have a particularly sweet tooth to enjoy this dessert.

Cassata is a sponge cake soaked in liqueur, wrapped in green marzipan and topped with icing and candied fruit. This cake is particularly popular at Eastertime along with lambs modelled from marzipan.

If you happen to find yourself in the Piazza del Duomo in Syracuse and require a midmorning snack to munch on whilst you admire the city’s cathedral (this edifice happens to encapsulate much of the island’s history in the same way that Sicily’s food does – you’ll find elements of Greek, Roman, Arab and Spanish elements incorporated into its structure), brioche con gelato is the perfect delicacy for the job. The buttery brioche is stuffed with ice cream and tastes delicious accompanied with a coffee.

After 10 years working in the travel industry selling and marketing holidays across the globe, Annabel decided to set up the Smudged Postcard blog to share her knowledge of family travel. The blog features adventure and cultural travel ideas with a focus on road trips and sustainable accommodation. Based in the UK, Annabel writes about where to travel in the British Isles with kids along with plenty of ideas for European holidays, with Italy being a particular focus. Connect with Annabel on Instagram, Facebook and Twitter.

Read These Other Foodie Posts!