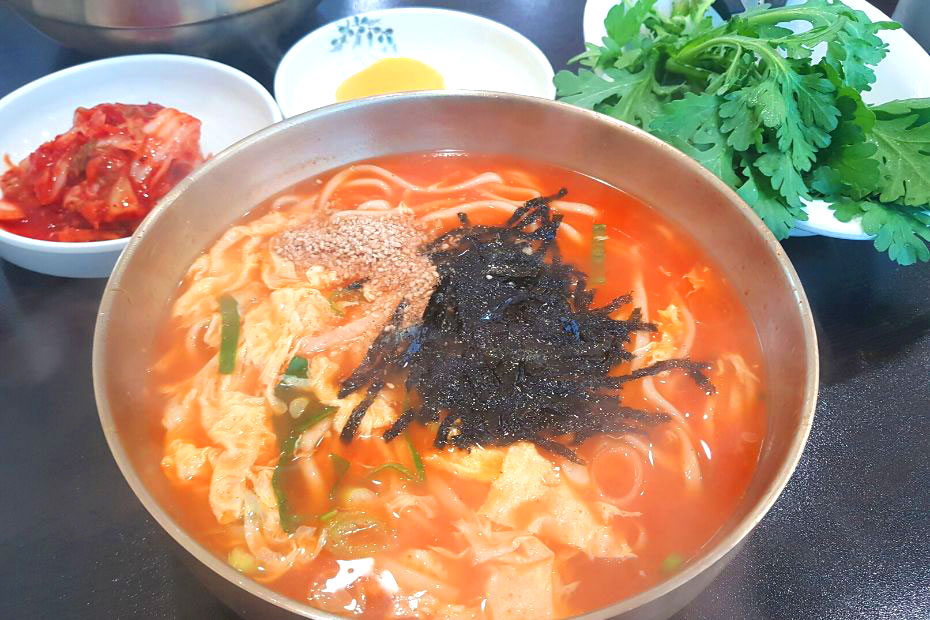 Seoul is a food-lovers paradise with a wide array of dishes on offer, both traditional Korean foods and also Korean-twists on internationally acclaimed fare. This list of the top 10 things to eat in Seoul will introduce you to the best tastes you simply must try when you visit Korea. From scrumptious Asian street food snacks to hearty meals to share with friends and family, there’s bound to be something to tickle your taste buds here.

No list of things to eat in Seoul would be complete without Korea’s most famous, most loved dish of all – samgyeopsal. Samgyeopsal is one of several kinds of meats that you can enjoy when you have Korean BBQ, and is by far the most popular.

The thick, juicy slices of pork belly offer a soft bite bursting with meaty, smoky flavor. It’s cheap, cheerful, and is perfect when wrapped up in a lettuce leaf with kimchi, garlic, and other side dishes stuffed inside.

This is not an elegant meal. It’s a wonderfully messy experience where you’re eating with your fingers and mixing and matching all kinds of foods together, washed down with Korean beer and soju (a Korean spirit). Best shared with friends in the evening, a samgyeopsal meal is a quintessentially Korean experience that just has to be tried.

If samgyeopsal is the best meal to eat in Seoul, then tteokbokki is the representative Korean street food that you must also try. A bright red broth of sliced and steamed rice cakes, fish cakes, scallions, and boiled eggs in a sweet and spicy sauce that’s packed full of red chilis, this is a cheap, filling street food that is popular with locals and tourists alike. Grab a bowl of it on a cold winter’s day in Seoul and you’ll feel full and warm inside.

This is another messy Korean food that is easy to eat, with the soft, spicy ingredients going down smoothly. Make sure you try tteokbokki in different places, as each place has their own recipe for the sauce and might add extra ingredients.

You can also eat tteokbokki in a restaurant, where it’s served in a large metal bowl and heated at the table. You can add cheese, ramyeon noodles, meat, and lots more to it to make it a full meal.

If you’re worried about all the calories in samgyeopsal and tteokbokki, bibimbap is a much healthier food you can eat in Seoul. This meat-free meal is great for a hot summer’s day and full of nutrients.

Bibimbap is a mixture of local vegetables, rice, chili paste, and a fried egg. It’s beautifully laid out in a big metal bowl and you get the pleasure of mixing it up and adding as much gochujang (chili sauce) as you like / can handle. This meal is deceptively filling, but in a good way.

If you’re visiting in winter, try dolsot (hot stone) bibimbap – it’s the same, but comes in a hot stone bowl that cooks the meal as you eat it. The egg is raw and fries as you mix it, leaving you a sticky fried egg and rice mixed with vegetables.

Where To Try It:
Jeonju Yuhalmeoni Bibimbap (전주비빔밥) in Namdaemun
Cost:
From 8,000 KRW

Another healthy Korean food to eat in Seoul that is both a street food and main meal, kimbap is a versatile dish that’s perfect at any time.

The basic version of kimbap is a few ingredients wrapped in rice on top of a sheet of dried seaweed. This is then rolled up like a maki sushi roll and sliced up into bite-sized pieces or served as a whole roll.

What’s so great about kimbap is that you can add anything into the middle – pork cutlets (donkasu), salmon, tuna, cream cheese, lobster, fish cakes, and even samgyeopsal.

You can buy kimbap from convenience stores, restaurants, and take-out stores across Seoul. It’s cheap and cheerful but filling and comes in a wide variety of flavors.

One of the healthiest things to eat in Seoul has to be samgyetang. Samgyetang is a stomach-pleasing bowl of chicken soup that’s packed with lots of hearty ingredients that will supercharge your energy levels when traveling.

This a not like a normal chicken soup and features a whole (small) chicken in each serving, which is soft and tender after cooking slowly in the delicious soup. What’s great about this dish is the salty broth with ginseng, jujube, garlic, herbs, and rice all cooked together around the chicken to create an aromatic, heart-warming soup.

This is a traditional Korean dish and perfect if you’re feeling tired or too hot during summer. In fact, Koreans eat this during the hottest days of the year as it’s believed to help keep you cool inside.

Where To Try It:
Tosokchon Samgyetang in Jongno-Dong (next to Gyeongbokgung Palace)
Cost:
From 12,000 KRW per serving.

Korean meals are best when shared with others, and dakgalbi is another great street food you can eat in Seoul that gives you a fantastic dining experience.

Dakgalbi is a spicy stir-fried mixture of chicken, vegetables, rice cakes, chili paste sauce, and other spices and seasoning. It’s cooked in a large metal pan in the middle of the table and you stir it around until it’s ready to eat.

You’ll have a lot of fun picking your favorite bits out and stuffing them in your mouth while they’re hot and fresh. The variety of textures, from soft chicken to chewy rice cakes, makes this Korean dish a taste sensation.

If you’re feeling particularly greedy, you can add cheese on top and extra noodles, too. Wear one of the provided bibs to keep yourself clean as this can definitely get messy.

Where To Try It:
Hongdae Dakgalbi in Hongdae
Cost:
From 12,000 KRW per serving

One of Korea’s most popular dishes is KFC, as in Korean Fried Chicken. When you’re in Seoul, you’ll see countless chicken restaurants offering a variety of fried chicken dishes in different sauces and styles.

The best one by far is yangnyeom tongdak, which is a sweet, sour, and spicy sauce coating crunchy fried chicken. This might not sound like an authentic Korean dish, but you’ll find Koreans enjoying it every night of the week, usually with fresh draft beer. This is known as chi-maek, which is chicken and maekju (beer).

With a bold, sweet taste that’s a little bit spicy and sour, and topped with crushed nuts, this dish is irresistible and will have you licking your fingers in delight. You can eat this in a restaurant, or grab a cup of it from street food stalls.

Where To Try It:
Eongteoli Fried Chicken in Itaewon
Cost:
From 15,000 for a large portion

A street food classic dessert that you’ll find in many traditional markets and street corners, hotteok is one of the best things to eat in Seoul when you want a sweet bite to go.

Hotteok is a sweet pancake that’s made from a ball of dough filled with sweet ingredients such as brown sugar, honey, peanuts, and cinnamon. The actual filling can vary depending on where you get it, with some adding in other ingredients such as seeds and nuts. Watch the seller beat and fry the dough in front of your eyes and then fold it into a small paper cup for you to gingerly bite into as it starts to cool down. Best eaten fresh, especially in winter.

Where To Try It:
Gwangjang Market Food Alley
Cost:
From 1,500 KRW per piece

Kalguksu is simple dish that’s deceptively filling. The knife-cut noodles are thick and chewy and are great for slurping down when you’re really hungry.

The noodles are really the star of the show and there’s not much else in most kalguksu dishes except a rich broth and some leafy vegetables. But the noodles are so good that you could eat a bowl all by themselves.

There are different versions of this dish that come with shellfish, ground beef, or chicken, but the standard is plain noodles in broth.

Because the noodles are cut by hand with a knife, not spun, they’re extra rich and tasty. You really notice the difference versus regular noodles.

The chefs cut the noodles then slap them around before throwing them into the soup. If you find a place that makes the noodles fresh in front of your eyes, it’s quite a sight.

Where To Try It:
Jongno Halmeoni Kalguksu (종로할머니칼국수)
Cost:
From 8,000 KRW per serving

Budae Jjigae is an unusual fusion of East and West. Born in the days of the Korean war, when US soldiers shared food with local Koreans, this is a typical Korean jjigae (stew) with rick cakes, noodles, and a spicy soup, with big chunks of American goodies such as SPAM, sausages, baked beans, and cheese. The combination works really well and has become a very popular winter dish for Koreans looking for a cheap yet filling meal.

It’s definitely not a healthy meal, but it’s a fun one that you can share with hungry friends. Like tteokbokki and dakgalbi, it’s served in a big metal pan in the middle of your table and you wait for it to cook, dipping in to try the various ingredients and splashing sauce everywhere as you go.

Where To Try It:
Daewoo Budae Jjigae in Gangnam
Cost:
From 10,000 KRW per serving

About the Author, Joel:

Joel is an expat who has lived and worked in South Korea since 2015 and shares tips at In My Korea. You can follow him here on Facebook or Instagram. Joel also shares his passion for Korean food, travel, culture, and lifestyle through the Best of Korea. You can find out more about Korea on this site, including how to travel around, what to see, the latest travel restrictions, and insights into life in Korea and Korean culture.

This website uses cookies to improve your experience while you navigate through the website. Out of these, the cookies that are categorized as necessary are stored on your browser as they are essential for the working of basic functionalities of the website. We also use third-party cookies that help us analyze and understand how you use this website. These cookies will be stored in your browser only with your consent. You also have the option to opt-out of these cookies. But opting out of some of these cookies may affect your browsing experience.
Necessary Always Enabled
Necessary cookies are absolutely essential for the website to function properly. This category only includes cookies that ensures basic functionalities and security features of the website. These cookies do not store any personal information.
Functional
Functional cookies help to perform certain functionalities like sharing the content of the website on social media platforms, collect feedbacks, and other third-party features.
Performance
Performance cookies are used to understand and analyze the key performance indexes of the website which helps in delivering a better user experience for the visitors.
Analytics
Analytical cookies are used to understand how visitors interact with the website. These cookies help provide information on metrics the number of visitors, bounce rate, traffic source, etc.
Advertisement
Advertisement cookies are used to provide visitors with relevant ads and marketing campaigns. These cookies track visitors across websites and collect information to provide customized ads.
Others
Other uncategorized cookies are those that are being analyzed and have not been classified into a category as yet.
SAVE & ACCEPT
15 Shares
Share4
Pin11
Tweet
WhatsApp
Telegram
Email