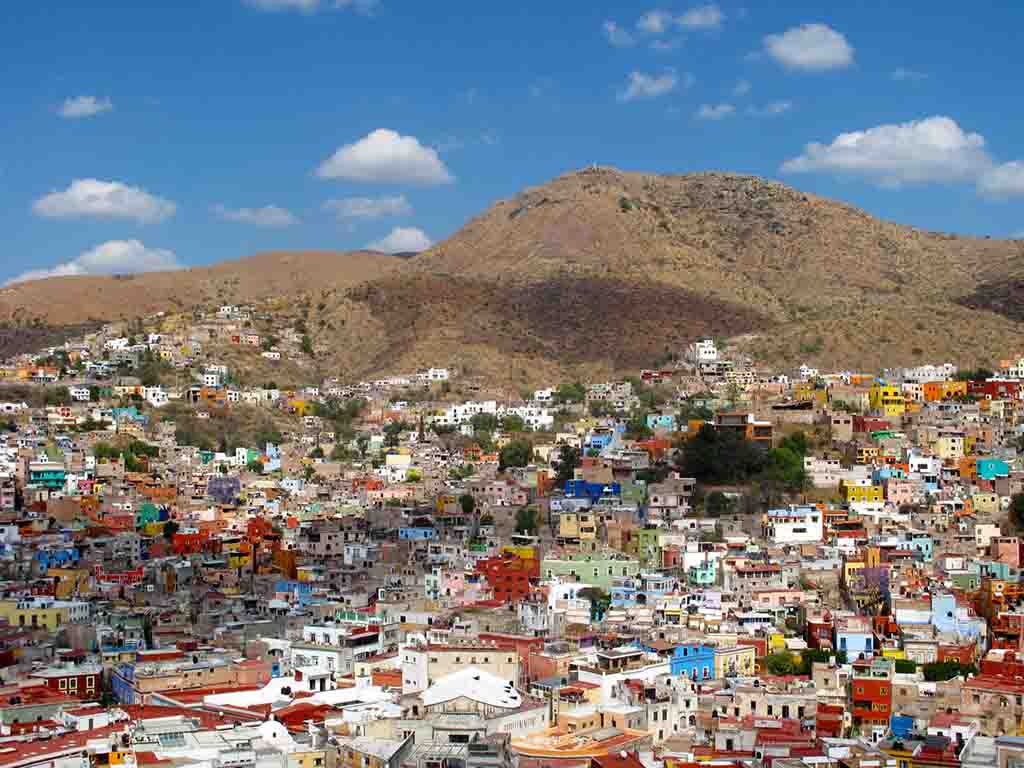 Guanajuato, the capital of the central Mexican state of the same name, is not like many of the other places in Mexico.

Built in a valley surrounded by hills, it’s made up of narrow, winding streets and as such feels a lot more like an old European city than a Mexican one.

Built on the success of the silver mines that lay beneath the city, its economy mainly relies on tourism nowadays, though compared to nearby San Miguel de Allende, it definitely doesn’t feel like it.

The hills covered in colorful buildings are what first strike you when you arrive in Guanajuato. Nothing is dull – everything is painted in bright colors, with seemingly no regard for coordinating with neighbors. Somehow, it works though!

The landscape of the city is reminiscent of Lisbon, though without the water. Everywhere you go in the town is either up hill or down hill, and even though the distances are not large, it may take some time. Since Guanajuato sits at 2000 meters above sea level, walking up an incline can quickly leave you out of breath.

Almost any point above the center of the city offers impressive views of the surrounding area, so just walking uphill and then turning around to see how far you’ve climbed can be quite rewarding.

One of the most expansive views, and without the climb, can be had from the Monumento al Pípila, reachable by the town’s only funicular railway, which costs M$36 each way.

The ride up is quite lovely, and the views from both the viewing terrace at the top and the monument just a few stairs away are quite spectacular. Seeing it from above like this is also a good way to orient yourself in the town.

Back at street level, just wandering around the town, you’ll stumble across many gems of colonial architecture at the squares, just like you would in the town of Merida. The cute and diminutive Plazuela del Baratillo and the larger and grander Plaza de la Paz with its manicured garden and imposing yellow church are definitely local favorites.

Interestingly, Guanajuato was the birthplace of famous Mexican muralist and husband of Frida Kahlo, Diego Rivera.

The Museo Casa Diego Rivera occupies the house where he was born and raised, and great care has been taken to recreate how it would’ve looked at that time.

There are a few pieces of his early work, but mostly it is interesting to visit for a glimpse into his life. And of course, you can help but laugh at the so-bad-they’re-good papier mâché statues of him and Frida!

Its closeness to nature is another thing that makes Guanajuato so appealing. Since the town is in a valley, you can get some even more expansive and panoramic views if you climb a bit out of town and into the surrounding mountains.

Cerro de la Bufa, roughly 4 kilometers to the south of downtown Guanajuato offers a pleasant hike out of town and easy access to the countryside.

Getting out of the town requires some pretty steep ascents, though these are all on paved streets, and some even with steps so it’s relatively easy. You can hike there and back into town in around 2 hours using nothing more than Google Maps as your guide.

With delicious Yucatan food at almost every street corner, you’re definitely spoilt for choice about what to eat in Guanajuato.

With simple but tasty food, this place is located just across the street from the Museo Casa Diego Rivera has a relaxing ambiance with a great view. Dishes are a mix of typical Mexican fare such as tacos, and more general items such as sandwiches, soups, and burgers.

This fully vegetarian falafel restaurant is a great option if you’re looking for something non-traditional.

With perfectly crispy falafel, smooth hummus, and filling stuffed vine leaves, it’s ideal for a comforting and filling meal. They also have soup and most dishes can be served as a plate or in a sandwich.

Being Mexico, everything is served with fresh limes and the aguas frescas as on point. It gets busy at lunchtime, so come early (1-2pm) to get a seat.

Enjoy delicious churros in Guanajuato at this place on Plaza de la Paz. Pair your churros with a freshly brewed coffee or espresso. The location is cute and it’s clean, bright, and delicious. Even the plain churros rolled in sugar are worth visiting for.

This is a great option if you’re in the mood for ice cream. With a few fruit sorbets plus more traditional milk-based ice creams, this place is still worth a visit for the hipster design and pleasantly odd roof terrace with views up towards the funicular.

Where to Stay in Guanajuato

Part of the charm of Guanajuato is that it is so walkable: even staying outside of the center proper, you can easily get around everywhere by foot. You can find plenty of pleasant apartment rentals just a five-minute walk from the center of town.

If you’re looking for something even more central and with more extras included, try Edelmira Hotel Boutique with its cozy, modern rooms and an indoor pool, Hotel Alonso 10 Boutique & Arte for some old-world decadence, or the super fancy and sleek Hotel Boutique 1850 right in the heart of Guanajuato.

Auston runs the blog Best Vegan Tours and is also a freelance writer. His work has been featured in many publications including Attitude Magazine, Edge Media Network, The Houston Chronicle, and ManAboutWorld Magazine. You can follow Best Vegan Tours on Twitter and Instagram.

This website uses cookies to improve your experience while you navigate through the website. Out of these, the cookies that are categorized as necessary are stored on your browser as they are essential for the working of basic functionalities of the website. We also use third-party cookies that help us analyze and understand how you use this website. These cookies will be stored in your browser only with your consent. You also have the option to opt-out of these cookies. But opting out of some of these cookies may affect your browsing experience.
Necessary Always Enabled
Necessary cookies are absolutely essential for the website to function properly. This category only includes cookies that ensures basic functionalities and security features of the website. These cookies do not store any personal information.
Functional
Functional cookies help to perform certain functionalities like sharing the content of the website on social media platforms, collect feedbacks, and other third-party features.
Performance
Performance cookies are used to understand and analyze the key performance indexes of the website which helps in delivering a better user experience for the visitors.
Analytics
Analytical cookies are used to understand how visitors interact with the website. These cookies help provide information on metrics the number of visitors, bounce rate, traffic source, etc.
Advertisement
Advertisement cookies are used to provide visitors with relevant ads and marketing campaigns. These cookies track visitors across websites and collect information to provide customized ads.
Others
Other uncategorized cookies are those that are being analyzed and have not been classified into a category as yet.
SAVE & ACCEPT
14 shares