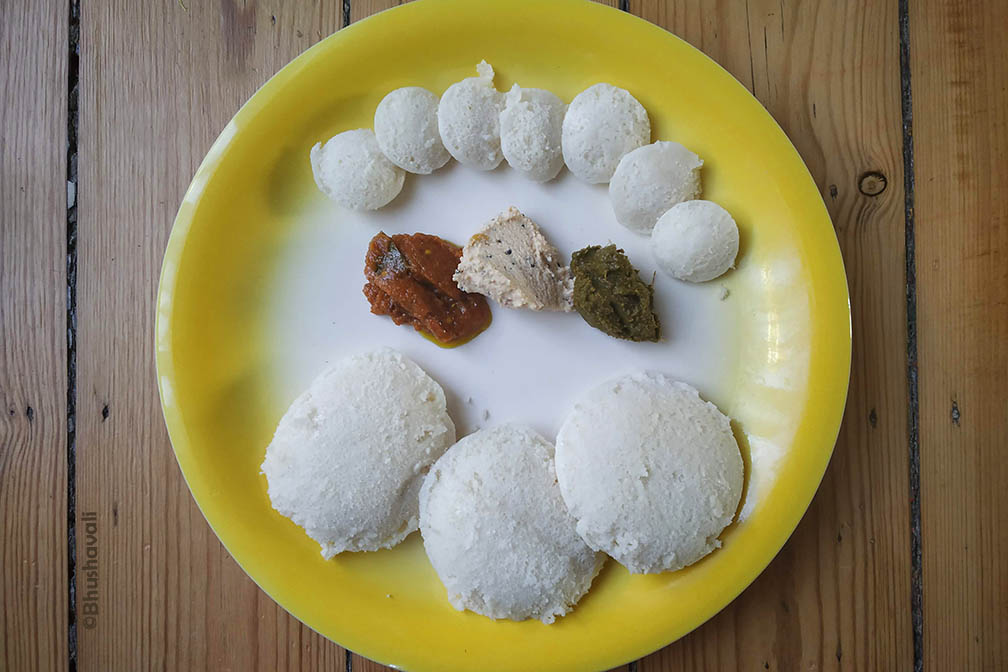 Idli is an authentic South Indian dish, a savory rice-cake. India, being a vast country, has a wide variety of local cuisines. Idli belongs to southern India, primarily made in Tamil Nadu, Andhra & Karnataka. It is made by steaming fermented batter of rice & urad lentils. It is ideally served with sambar (lentil soup), 2-3 varieties of chutney including tomato, coconut, etc, and milagai podi (spice powder). It is often consumed as break-fast in very many households.

How are idlis made in India?

The process of making the idli batter begins with soaking rice & urad lentils and grinding them together and letting them ferment, ideally, overnight. The weather of Southern India is very favourable to ferment the batter.

Traditionally grinding was done on hand-operated stone grinders and nowadays electric food-processors are used. Nowadays batter is made to last for a few days, even upto a week. It is refrigerated to prevent it from getting too sour.

Steaming hardly takes 10 minutes per batch which consists of 12-16 idlis. There are also mini idli which is tiny in size and are soaked in sambar – that’s a dish called ‘sambar idli’.  So, next time when you visit Chennai, don’t miss tasting Idli in a local restaurant. It is one of those things to do in Chennai, that no one should miss. It tastes very mild with just salt in it. The flavours & spiciness are from the sambar & chutneys.

The same batter is also used in a variety of other dishes with different methods of preparation including dosa, uthappam, paniyaram etc.

Should you eat idlis outside India?

Here’s the thing – more often than not, Indian restaurants in colder countries serve idli with baking soda in it, to improve the fluffiness. This is done since in the colder weather, natural fermentation of the batter doesn’t happen very efficiently. The taste of idlis made with baking-soda just doesn’t do any justice to the real deal. I have felt home-sick & had idli in London & France, only to feel more miserable. Expat home cooks, however, do ferment their batter in the oven, which is almost similar to what you get in southern India. So if you’re eating idlis outside India, first ask how the batter is fermented at the restaurant, and if it’s done naturally, you’ll more than enjoy your idlis!

Author Bio: My Travelogue by Bhushavali

Bhushavali is a history-buff and loves to visit UNESCO World Heritage Sites as well as other historic sites. She’s an Indian, currently living in Belgium. She is a vegetarian and prefers easy to make, healthy foods. Her usual diet is Indian, some days South Indian and some days, it’s North Indian. Connect with Bhushavali on Facebook at My Travelogue.

Other Popular Foodie Posts to Read

1 thought on “History of the Iconic Idli of Southern India”

This website uses cookies to improve your experience while you navigate through the website. Out of these, the cookies that are categorized as necessary are stored on your browser as they are essential for the working of basic functionalities of the website. We also use third-party cookies that help us analyze and understand how you use this website. These cookies will be stored in your browser only with your consent. You also have the option to opt-out of these cookies. But opting out of some of these cookies may affect your browsing experience.
Necessary Always Enabled
Necessary cookies are absolutely essential for the website to function properly. This category only includes cookies that ensures basic functionalities and security features of the website. These cookies do not store any personal information.
Functional
Functional cookies help to perform certain functionalities like sharing the content of the website on social media platforms, collect feedbacks, and other third-party features.
Performance
Performance cookies are used to understand and analyze the key performance indexes of the website which helps in delivering a better user experience for the visitors.
Analytics
Analytical cookies are used to understand how visitors interact with the website. These cookies help provide information on metrics the number of visitors, bounce rate, traffic source, etc.
Advertisement
Advertisement cookies are used to provide visitors with relevant ads and marketing campaigns. These cookies track visitors across websites and collect information to provide customized ads.
Others
Other uncategorized cookies are those that are being analyzed and have not been classified into a category as yet.
SAVE & ACCEPT
11 shares