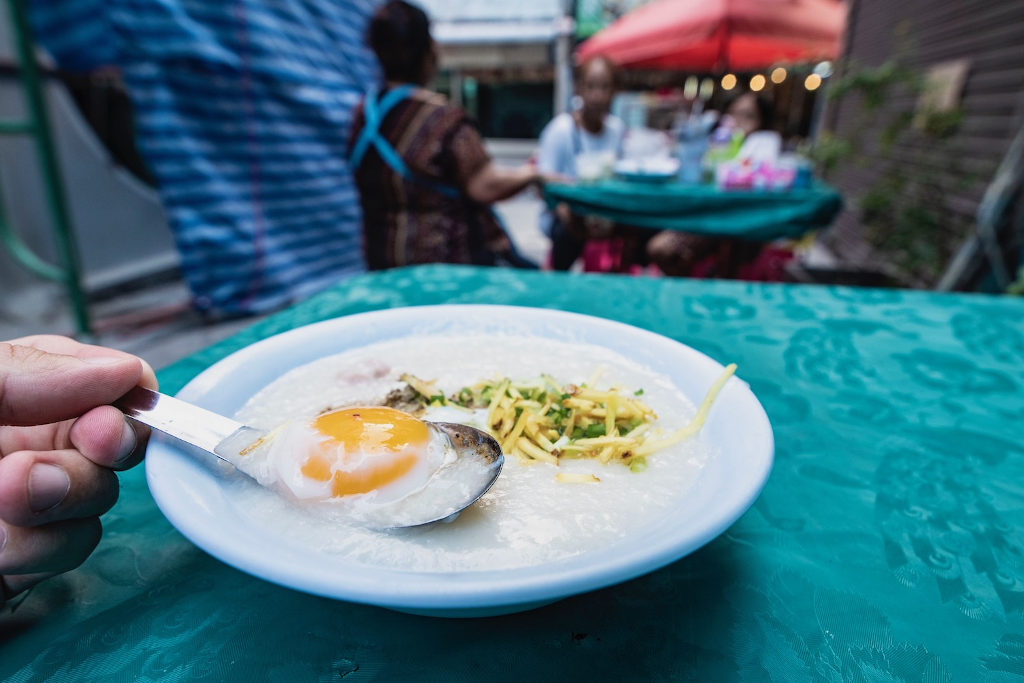 If you’ve ever been to Thailand, you know that the vibrancy and variety of the country’s cuisine is (sadly) under-represented by Thai restaurants in your home country. This is true both in terms of the number of dishes you can find on menus, but also in the intensity and complexity of the flavors.

Below, I’ll answer some common questions about Thai food, which I think you’ll find illuminating whether or not you’ve visited Thailand. If you have, they might help you explain the nuances of Thailand’s culinary culture to your less-traveled friends.

If you haven’t visited Thailand, I have a feeling you’re going to start searching for flights soon. Once you’ve read the juicy facts I’m about to give you, two weeks in Thailand will seem like an even more delicious prospect.

What is traditional Thai food?

“Traditional” Thai food takes many different forms, and varies regionally. Well-known Thai dishes include Pad Thai (stir-friend noodles with meat, seafood or tofu), Gaeng Kiaw Wan Gai (green curry soup with chicken) and Som Tam Thai (Thai-style spicy papaya salad). Although these dishes are most authentic and delicious in Thailand, you can find them at most Thai restaurants around the world.

For me, Thai food is special for precisely the reasons that Thai culture, more broadly, is so unique: It is unabashedly intense. Whether because of its eclectic flavors (which I’ll describe more in a minute), bright colors or the sometimes unorthodox ways it’s prepared (in street stalls, for example, with seemingly minimal attention paid to sanitation), Thai food is loud, proud and unapologetic.

If you’ve ever been to a Thai restaurant (especially in Thailand), you’ll notice a four-lobed sauce receptacle, known as Puang Prik, on the table. This contains sugar (sweet), fish sauce (salty), vinegar (sour) and chili flakes (spicy)—the way Thais manually season their foods provides a hint to how they prepare it. While some dishes showcase one taste more than another, all maintain some balance of these four key flavors.

What is the difference between Northern and Southern Thai food?

Whether in mainstream destinations like Chiang Mai or the rough-and-tumble Isaan region, I’d say that Northern Thai food tends to be spicier (Khao Soi curry chicken soup and the aforementioned Som Tam papaya salad) and meatier, as in the case of Sai Krok sausages. Southern Thai foods like Massaman Curry bear the influences of nearby cultures (in this case, Malay); they also spotlight fresh-caught seafood, as Gaeng Som fish curry does.

What should I try in Thailand?

I’d recommend being adventurous in Thailand, but this doesn’t have to mean being outrageous. For example, relatively mild Khaaw Man Gai (Hainanese-style boiled chicken with rice) is just as tasty as the spiciest Pad Krapraw (stir-fried meat with holy basil) I’ve had on the streets. While blood and entrails are common ingredients, especially in Northern cuisine, “normal” Khaaw Niaw Ma Muang (mango with sticky rice) can be just as satisfying.

What do vegetarians eat in Thailand?

Most Thai dishes can be made without meat inside them, although many include animal by-products in their preparation. If you’re vegan (or a strict) vegetarian, you basically have two surefire options. Larger cities like Bangkok and Chiang Mai are home to many vegan restaurants, which are popular both among locals and foreigners. Beyond this, any food served in a Buddhist temple (these are everywhere in Thailand) is 100% vegan.

What do local Thai people eat for breakfast?

Although certain morning foods in Thailand scream “breakfast” (I’m thinking the Kai Jiaw Thai-style omelette), Thais eat all kinds of food in the morning. One of my favorites is Jok, i.e. Thai-style pork or chicken congee, and I also used to eat Khaaw Ka Muu (stewed pork leg with rice) when I lived in Bangkok. When in doubt, head onto the streets after you wake up, and eat as the locals eat!

Did I answer all your questions about Thai Cuisine?

I hope you ate before you read this post! If not, you’re probably salivating for a Thai meal right about now. While the Pad Thai you find at your local raan aahaan might not be comparable to what you can enjoy on the streets of Bangkok, it’ll serve its purpose—to inspire your next trip to Thailand, regardless of when you’re able to take it. Here’s to hoping that when that time comes, you explore the Kingdom’s culinary map as broadly as you sample Thailand’s wide range of destinations and experiences.

About Robert from Thailand Starts Here

Robert Schrader created Thailand Starts Here, among other reasons, to introduce an English-speaking audience to the delicious world of Thai cuisine. Once you check out the website, make sure to follow Thailand Starts Here on Instagram, or here on Facebook, and here on Twitter.

Some popular food Stories and Travel posts to read!

1 thought on “Everything You Need To Know About Thai Food”

This website uses cookies to improve your experience while you navigate through the website. Out of these, the cookies that are categorized as necessary are stored on your browser as they are essential for the working of basic functionalities of the website. We also use third-party cookies that help us analyze and understand how you use this website. These cookies will be stored in your browser only with your consent. You also have the option to opt-out of these cookies. But opting out of some of these cookies may affect your browsing experience.
Necessary Always Enabled
Necessary cookies are absolutely essential for the website to function properly. This category only includes cookies that ensures basic functionalities and security features of the website. These cookies do not store any personal information.
Functional
Functional cookies help to perform certain functionalities like sharing the content of the website on social media platforms, collect feedbacks, and other third-party features.
Performance
Performance cookies are used to understand and analyze the key performance indexes of the website which helps in delivering a better user experience for the visitors.
Analytics
Analytical cookies are used to understand how visitors interact with the website. These cookies help provide information on metrics the number of visitors, bounce rate, traffic source, etc.
Advertisement
Advertisement cookies are used to provide visitors with relevant ads and marketing campaigns. These cookies track visitors across websites and collect information to provide customized ads.
Others
Other uncategorized cookies are those that are being analyzed and have not been classified into a category as yet.
SAVE & ACCEPT
99 shares