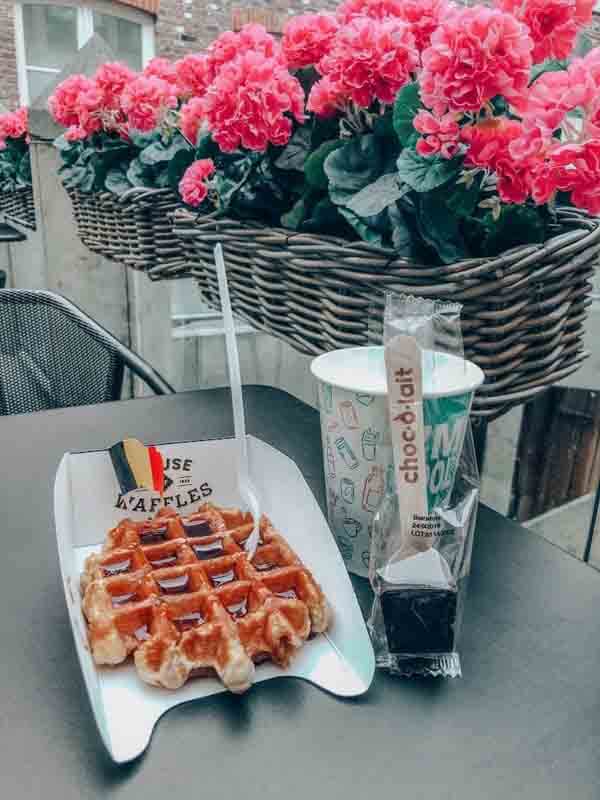 In North America, Belgian waffles can be easily found in the frozen aisle in the supermarkets. But did you know it tastes very different from the authentic Belgium waffles we tried on our recent trip to Brussels?

In Belgium, you can find them in restaurants, small cafes, to sweet shops, where they have their own version of waffles.

Waffles are known as “gaufres” (in French) or “wafels” (in Flemish), meaning the same as waffles English. Funnily, it is not called ‘Belgian waffles there’. It is just waffles.

Waffles can be traced back to the Middle Ages when they reached Europe and were sold as a round crispy street snack outside of churches in those days. Waffles became fairly popular in Europe in the 17th and 18th centuries, but only gained popularity in the US after the New York World Fair in 1964 when they were introduced as Bel-Gem waffles.

If you head to Bruges in Belgium, you will find many side-cafes selling those types of waffles that are also reasonably priced. It is in Bruges where you can taste the special ‘waffle on a stick’ creation!

Waffles in Belgian are of two kinds – Brussels (and now world wide popular) waffles and Liege (another city in Belgium). Brussels waffles are lighter and crispier (similar to the ones found in the USA – it is crispy!) Liege waffles have a thicker base.

In Belgium, there are normally had for dessert and/or tea time/snacks time, unlike in North America where we normally consume for breakfast. I also make it Canadian using maple syrup on top, but that’s not the point. Point is Belgian waffles should be tried at least once to relish and savour the difference.

Have you tried any Belgian brussels? Or do you prefer liege? Which is your favorite?

About Mayuri, the founder of To Some Place New

Mayuri is the creator behind ToSomePlaceNew and Canada Crossroads. An Indian-Canadian traveler and a historian (by qualification), she loves to capture historical and cultural nuances from all over the world, especially Europe. She travels with her husband and lives in Canada. Follow her on Instagram!

Read these other foodie posts!

This website uses cookies to improve your experience while you navigate through the website. Out of these, the cookies that are categorized as necessary are stored on your browser as they are essential for the working of basic functionalities of the website. We also use third-party cookies that help us analyze and understand how you use this website. These cookies will be stored in your browser only with your consent. You also have the option to opt-out of these cookies. But opting out of some of these cookies may affect your browsing experience.
Necessary Always Enabled
Necessary cookies are absolutely essential for the website to function properly. This category only includes cookies that ensures basic functionalities and security features of the website. These cookies do not store any personal information.
Functional
Functional cookies help to perform certain functionalities like sharing the content of the website on social media platforms, collect feedbacks, and other third-party features.
Performance
Performance cookies are used to understand and analyze the key performance indexes of the website which helps in delivering a better user experience for the visitors.
Analytics
Analytical cookies are used to understand how visitors interact with the website. These cookies help provide information on metrics the number of visitors, bounce rate, traffic source, etc.
Advertisement
Advertisement cookies are used to provide visitors with relevant ads and marketing campaigns. These cookies track visitors across websites and collect information to provide customized ads.
Others
Other uncategorized cookies are those that are being analyzed and have not been classified into a category as yet.
SAVE & ACCEPT
13 shares