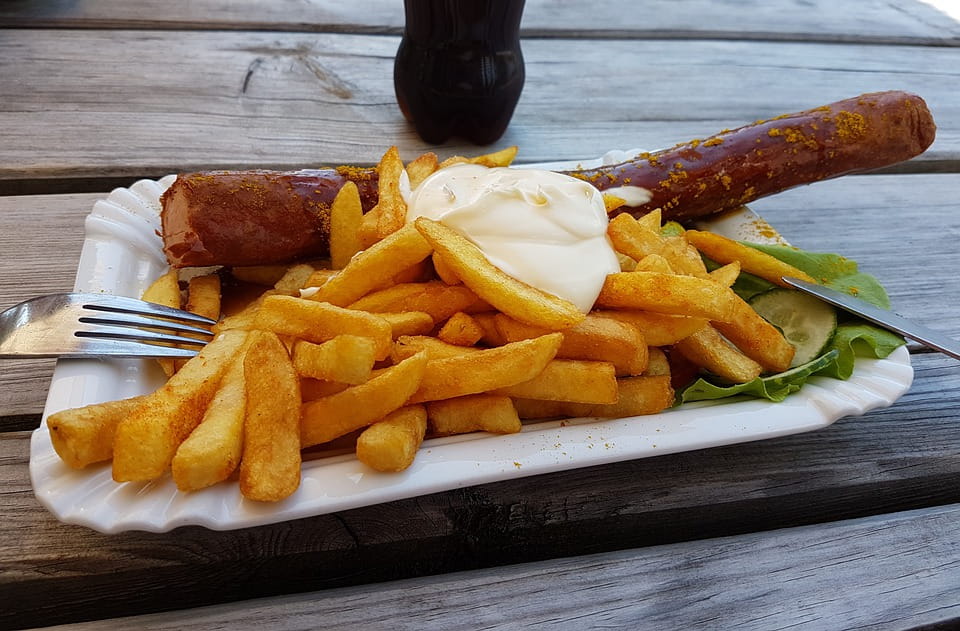 If you’re planning a trip to the German capital, you might wonder what to eat in Berlin during your stay. As one might expect, the food scene in Berlin is as diverse as the city itself. One evening, you can splurge on vegan fine dining. The next, you can try fast food classics like döner or currywurst. And the following evening, sit down at an 100-year-old restaurant serving true Berlin classics of yesteryear. Whatever your taste buds are craving, Berlin has it. So let’s dive right in!

What to Eat in Berlin: Fast Food Classics

Just as in Provence you have to try the rosé, in Berlin, you need to pick up at least one Döner during your stay. This iconic Turkish-German dish usually consists of thin strips of meat (lamb, chicken, beef) or haloumi, wrapped inside a toasted pita. Add to this a variety of salad choices and sauces, ranging from mild to hot.

Since the early 1970s, when Turkish guest workers brought this dish to West Germany, the Döner has only gained in popularity. Now, you can find Döner at many busy street corners or coming out of a train or subway station. Some stands even have cult-like followings, with locals lining up to get their favourite Döner and chat with the owners.

Mr Kebab, serving both vegetarian and meat-filled döner, somewhat on the outskirts of Berlin but close to beautiful lakes, to combine with a day trip. (Address: Elcknerpl. 6, 12555 Berlin).

Currywurst is another Berlin specialty. After World War II, a kiosk owner in the upscale district of Charlottenburg had the brilliant idea to mix ketchup and curry powder, which she received from a British soldier. She poured the new sauce over the fried sausages she otherwise sold – and currywurst was born.

The dish was such a hit, especially with construction workers who were rebuilding bombed Berlin, that shortly thereafter she opened a restaurant and production facilities. Today, you can get currywurst at many kiosks around the city and pay homage to this spirit of innovation.

What to Eat in Berlin: Traditional Berlin Cuisine

Altberliner Küche or old Berlin cuisine, focuses on hearty dishes, perfect for warding off cold winter days. When you are served traditional Berlin fare, it will likely be similar to what the locals ate in the 1800s, consisting of meat, potatoes and onions. But do not underestimate these ingredients!

Leber Berliner Art is a typical dish made up of liver with fried apple slices, onion rings and mashed potatoes.

What to Eat in Berlin: Healthy Choices

Fast-forward to modern-day Berlin, and you’ll find an endless supply of health-conscious cafes and restaurants in the city.

From poke bowls to smoothie bars that double up as fitness studios, you’ll definitely be able to get your vitamins and veggies. Every month, new eateries are springing up, especially in the hip neighborhoods of Mitte, Prenzlauer Berg and Friedrichshain.

Due to the sheer variety of offerings in Berlin, vegan food deserves its own section in this blog post. To satisfy your sweet tooth, you can opt for some vegan ice cream or cake.

Feeling like something a little heartier? Why not check out a newly opened vegan burger joint. Alternately, treat yourself to vegan fine dining. Berlin has it all, for every budget.

It is also worth noting that almost all cafes offer vegan versions of their drinks, so you can order your coffee with soy, oat or almond milk.

What to Eat in Berlin: Indulge Your Sweet Tooth

Germans love the afternoon tradition of Kaffee und Kuchen, which is the equivalent of British high tea. At 4 pm, it is Kaffeezeit, and Germans take a break from their day to enjoy a cup of coffee and a piece of cake. Berliner Pfannkuchen, or sugary donuts filled with jam, are also perfectly acceptable.

Even as a visitor, you can join in on this delicious tradition by spending some time in one of Berlin’s many coffee shops and sample their homemade goods.

What to Eat in Berlin: International Choices

As a major global hub, Berlin probably harbours at least one restaurant serving whichever cuisine you’d like to try, be it Jamaican soul food, Thai fusion or French crepes. While international choices require an article – or 5 – of their own, below are a few stand out choices:

In addition, several Berlin neighborhoods and streets are known for their offerings from various parts of the world.

Wander up Kantstraße in Charlottenburg for your pick of Asian eateries, from Japanese tapas to Thai street food. Make your way to the Afrikanisches Viertel (African Quarter) in Wedding for all kinds of specialties from this continent. Indulge in Turkish dishes as you visit Little Istanbul in Kreuzberg (don’t skip the Tuesday and Friday market along the Landwehrkanal). In Berlin, there is always something new to try.

Conclusion: What to Eat in Berlin Only Depends On Your Mood

Berlin is very diverse, and the food choices in Germany’s capital reflect the multicultural, vibrant and modern character of the city. While you’re out exploring Berlin, the question to ask isn’t really what to eat in Berlin or where to eat in Berlin; rather, what are you craving right now?

Marguerite is the creator of Berlin & Around, a blog, newsletter and social media community dedicated to expats in Berlin. Having lived in Berlin for 4 years, she continuously looks for new places to inspire her audience; in the city, in Brandenburg and around Germany. Find her on social at Facebook, Instagram, Twitter and Pinterest.

Other Posts About What to Eat Around the Globe

This website uses cookies to improve your experience while you navigate through the website. Out of these, the cookies that are categorized as necessary are stored on your browser as they are essential for the working of basic functionalities of the website. We also use third-party cookies that help us analyze and understand how you use this website. These cookies will be stored in your browser only with your consent. You also have the option to opt-out of these cookies. But opting out of some of these cookies may affect your browsing experience.
Necessary Always Enabled
Necessary cookies are absolutely essential for the website to function properly. This category only includes cookies that ensures basic functionalities and security features of the website. These cookies do not store any personal information.
Functional
Functional cookies help to perform certain functionalities like sharing the content of the website on social media platforms, collect feedbacks, and other third-party features.
Performance
Performance cookies are used to understand and analyze the key performance indexes of the website which helps in delivering a better user experience for the visitors.
Analytics
Analytical cookies are used to understand how visitors interact with the website. These cookies help provide information on metrics the number of visitors, bounce rate, traffic source, etc.
Advertisement
Advertisement cookies are used to provide visitors with relevant ads and marketing campaigns. These cookies track visitors across websites and collect information to provide customized ads.
Others
Other uncategorized cookies are those that are being analyzed and have not been classified into a category as yet.
SAVE & ACCEPT
60 shares