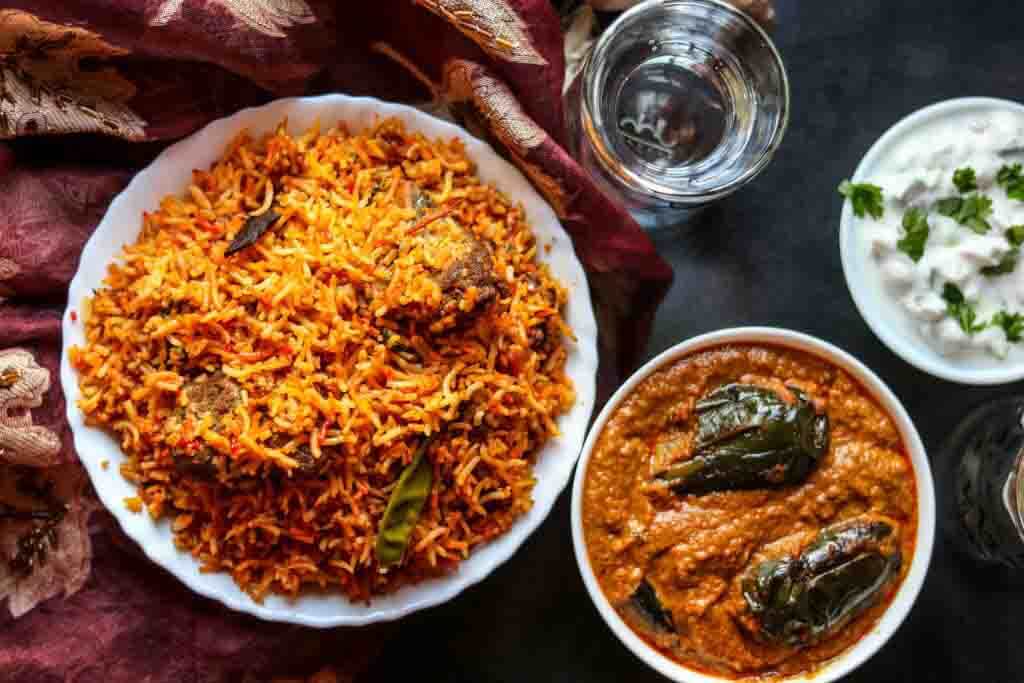 Any special occasion and Biryani is on the menu for Indians. To be honest, I think it’s on the table whether occasion or not. Ask any Indian for an iconic dish and they would suggest Biryani. The theory states that the word Biryani came from the Persian word ‘birinj’ meaning rice. Another one says it originated from the Persian word ‘biryan’ which means ‘fried before cooking’.

According to historic records, biryani has its origins in the kitchens of Mughals and is a combination of the Persian pilaf and also inspired by some Indian spicy rice dishes. Another interesting story tells us that when Mumtaz Mahal, wife of Shah Jahan saw that the army barracks were undernourished, she ordered the cooks to prepare a nutritious balanced dish for them and hence, biryani was made.

On the other hand, the author Pratibha Karan, who wrote the book titled Biryani, believes that this dish originated in South India. She says that being derived from pilaf varieties, it was brought to the Indian subcontinent by the Arab traders. She also postulates that pulao was an army dish in medieval India and the armies would eat pulao as it was an easy one-pot meal. This meal later got modified into “Biryani” through different cooking methods and different spices.

No matter what history says, Biryani is an age-old dish that has come down through the generations and is here to stay for even longer!

A simple way to prepare biryani is to have a base of onions and tomatoes, spices that will add flavoring, a source of protein, and the major ingredient – rice. Currently, this Indian dish has many varieties. The most famous ones are Hyderabadi Dum Biryani, Sindhi Biryani, Thalessery Biryani, Ambur Biryani, Kolkata Biryani, Kacchi Biryani, Tehari, and many others.

About Authors Sarah and Safiyah

You Cook, I Eat is a joint venture by two sisters – one loves to cook, while the other loves tasting and documenting it! Being third culture kids, Sarah and Safiyah have decided to compile their traditional family recipes belonging to the South Indian state of Tamil Nadu to inspire young cooks to remember tradition and try some delicious and unique recipes. Follow them to know all about Indian recipes, cooking tips and tricks, and hacks to use around a kitchen. Also, find their YouTube channel here for delicious videos!

2 thoughts on “The history of Indian Mutton Biryani”

This website uses cookies to improve your experience while you navigate through the website. Out of these, the cookies that are categorized as necessary are stored on your browser as they are essential for the working of basic functionalities of the website. We also use third-party cookies that help us analyze and understand how you use this website. These cookies will be stored in your browser only with your consent. You also have the option to opt-out of these cookies. But opting out of some of these cookies may affect your browsing experience.
Necessary Always Enabled
Necessary cookies are absolutely essential for the website to function properly. This category only includes cookies that ensures basic functionalities and security features of the website. These cookies do not store any personal information.
Functional
Functional cookies help to perform certain functionalities like sharing the content of the website on social media platforms, collect feedbacks, and other third-party features.
Performance
Performance cookies are used to understand and analyze the key performance indexes of the website which helps in delivering a better user experience for the visitors.
Analytics
Analytical cookies are used to understand how visitors interact with the website. These cookies help provide information on metrics the number of visitors, bounce rate, traffic source, etc.
Advertisement
Advertisement cookies are used to provide visitors with relevant ads and marketing campaigns. These cookies track visitors across websites and collect information to provide customized ads.
Others
Other uncategorized cookies are those that are being analyzed and have not been classified into a category as yet.
SAVE & ACCEPT
15 shares