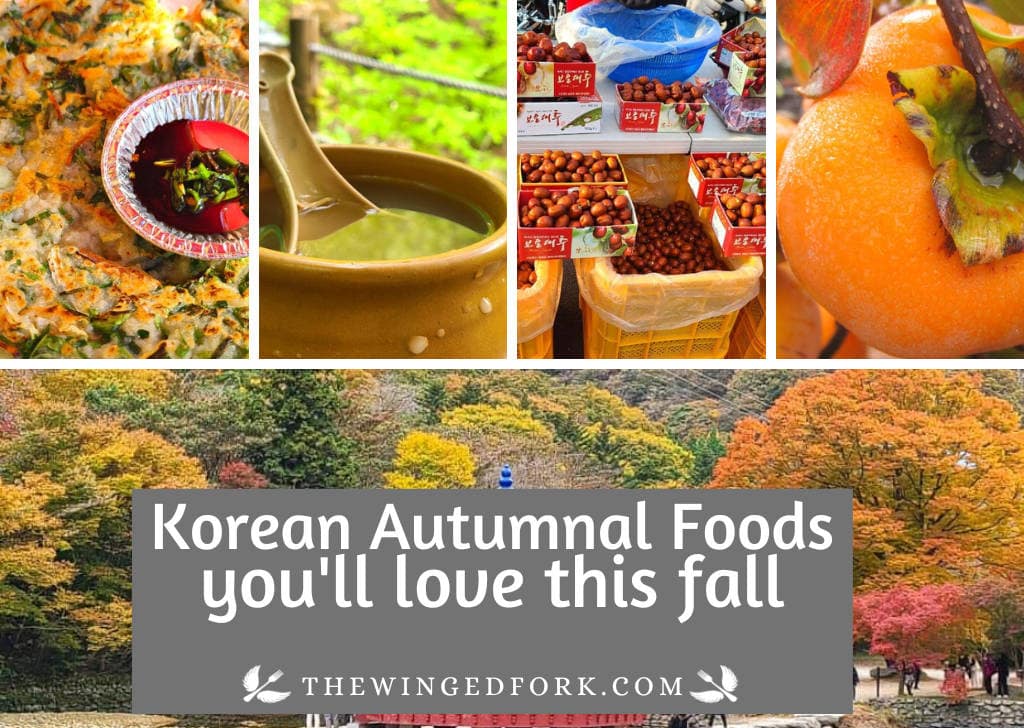 If you’re visiting Korea in October or any other time during fall, you must try these delicious Korean autumn foods. From savory Korean pancakes (jeon) to sweet and juicy Asian pears, there’s a selection of tasty treats that will make your mouth water.

Known as the season of ‘towering skies and plump horses’, due to the plentiful bounty of Korea’s lush farmland that’s squashed in between mountains, this is a time for Koreans to reward themselves for their hard work with delectable foods and big meals.

The mid-autumn festival (Chuseok – Korea’s biggest holiday) is a time when Koreans eat lots of these foods, and you can also enjoy them when you visit Korea. Whether you’re hiking in the national parks, enjoying the warm fall weather by the coast, or exploring Seoul’s traditional markets, there are loads of places to tuck into these treats.

From a host of traditional Korean dishes, here are 6 of the best Korean autumn foods for you to try this fall. Enjoy these foods when the weather is warm, the leaves are falling, and their flavors are at their fullest. As they say in Korea, 맛있게 드세요 (mas-issge deuseyo) – enjoy your meal!

The first of these Korean autumn foods is one of the least healthy, but certainly most satisfying. Jeon (전) are savory pancakes that come in various forms. The most popular one is haemul pajeon, which includes seafood (usually squid) and green onions. Other popular variants include gamja-jeon (potato) and kimchi-jeon (kimchi).

Although this dish is available all year round, autumn is definitely the best time to eat it. Jeon are a must-have when hiking in Korea and this season is the most incredible time to be in Korea’s many mountains. Hiking and eat jeon is almost a national pastime during the 3 months of fall. Add a bottle of makgeolli (traditional Korean rice wine) to go with it and you’ll get the full Korean experience – salty, savory, and sweet all mixed together.

An expensive Korean seasonal dish, but one that’s certainly worth the cost, crabs are best eaten in autumn as the females are packed with roe (crab eggs). The female crabs are full of meat and creamy roe eggs and this adds to the taste considerably. Korea, which is surrounded by coastal waters on 3 sides, has a wide selection of seafood dishes, but crabs are definitely one of the tempting, as well as most expensive.

There are many ways to enjoy crabs in fall. You can eat them steamed, cracking apart their shells and spooning or sucking out the creamy insides, or try them marinated in soy sauce or sweet and spicy chili pepper sauce. However, one of the best ways to eat them in Korea is a crab jjigae, which is basically a crab stew with a thick stock and extra ingredients. If you want to save money on this dish, buy it at Jagalchi Seafood Market in Busan, take it home and cook it yourself.

A fresh autumn treat that you’ll see hanging from trees or drying on people’s front walls is the persimmon. Known as gam (감) in Korea, these bright orange balls of fruity goodness are hard to miss when you explore Korea’s countryside and markets. These fall fruits are famous for clinging on to their trees and not actually falling until after the leaves have dropped, unlike most other fruits.

It’s easy to mistake them for oranges until you pick them up – they’re much bigger and have a skin more like a tomato, but they’re creamy inside. These fruits are very important in Korean Buddhism and symbolize transformation – turning from green and bitter fruits to orange and sweet ones.

There are numerous ways to enjoy plush orange persimmons during fall in Korea. Some people like them dried, known as got-gam (곶감) in Korean, while some like to eat them like an apple or kiwi.

On a warm day, persimmons are really refreshing when eaten straight from the freezer. The custard-like flesh is like a sorbet and you can scoop it out easily. Persimmons are grown naturally, vegan-friendly, and gluten-free. There’s really no reason not to enjoy one of the best Korean autumn foods in fall.

Another popular Korean autumn food that comes from the seas is the gizzard shad. This is best enjoyed at this time of the year as the gizzard shad pack themselves with lots of nutrients for the coming winter months, which means they’re full of healthy oils, have a strong flavor, and a juicy texture. They become a delicacy during the fall months and you’ll find them in seafood restaurants across the country.

When grilled, these fish are said to bring back lost daughters-in-law who ran away, such is the power of their delicious taste and smell. The best way to enjoy gizzard shad is by selecting a small to medium-sized fish, gently salting it, then putting it on a grill until it’s hot and plump. Take it off and enjoy it with a platter of veggies and side dishes. Besides grilling gizzard shad, these fish are also eaten raw as hoe (Korean sashimi). Wrap the slices of raw gizzard shad with a lettuce leaf and then season with garlic and chili sauce. Pop them in your mouth in one go and savor the rich, spicy tastes.

Walk through a traditional Korean market or a countryside lane in the Korean countryside during fall and you’ll probably find a big bucket full of jujube (red dates). These dates aren’t like the ones that come from a date palm, they’re like tiny reddish-brown apples that hide behind glossy green leaves.

Jujube have been used in traditional Korean medicine for a long time and are said to have many restorative properties, as well as the ability to keep you young! That’s why you’ll find fresh jujube for sale in autumn at hiking areas, where a lot of older Koreans explore the mountains looking for a healthy life and a way to stay young forever.

During wedding ceremonies, the newlyweds have to catch jujube and chestnuts that are thrown at them. Each jujube they catch represents the number of sons they’ll have. The chestnuts are for daughters.

As with persimmons, these healthy fruits can be eaten fresh or dried. The fresh version is crunchy and sweet with flesh similar to an apple. They’re bite-sized and great for snacking. The dried versions are even sweeter and usually sold sliced, like crunchy chips, or whole, resembling traditional dates.

The gigantic round pears found in East Asia are very different from the plump-waisted pears found in Europe and the US. Korean pears are much larger than traditional pears and feel more like an apple than the sweet, dewy texture you normally associate with pears. They have a sweet, crisp taste that’s bright white with a thin skin that makes them easy to eat.

You might be confused about how to eat something that’s as big as a small melon, but wrapped like an apple. The best way to tackle this fruit is to slice it like a watermelon and eat it in strips, or cut it up into bite-sized chunks.

Korean pears are mostly water and so are only 50 calories per piece – which makes them a very healthy snack that’s not only delicious, it’s also filling. You can find Korean pears in autumn salads and eaten by themselves. If you see one in the supermarket, be sure to pick it up and give it a try. Despite its intimidating size, you’ll find sweet rewards inside.

Korean pears perfectly represent the richness and versatility of these Korean autumn foods. You can put them in salads, eat them with yogurt, wrap it in prosciutto, or just eat it straight up like an apple if you really want to. I certainly won’t judge you if you do.

Where To Find Korean Autumn Foods:

The best place to find these yummy Korean autumn foods is in one of Korea’s many national parks. Not only are these the best places to see autumn foliage in Korea, they also have fresh harvest foods for sale and lots of traditional Korean restaurants.

The restaurants typically pick local produce from the nearby area, especially jujube, chestnuts, and persimmons. Jeon is a famous dish that hikers love to eat when they finish hiking and every national park will have a selection of jeon restaurants at the entrance. Coastal regions, such as Busan and Pohang, always have fresh seafood for sale, and you’ll find plenty of seasonal fish dishes like crab and gizzard shad available in fall.

About The Author, Joel:

This website uses cookies to improve your experience while you navigate through the website. Out of these, the cookies that are categorized as necessary are stored on your browser as they are essential for the working of basic functionalities of the website. We also use third-party cookies that help us analyze and understand how you use this website. These cookies will be stored in your browser only with your consent. You also have the option to opt-out of these cookies. But opting out of some of these cookies may affect your browsing experience.
Necessary Always Enabled
Necessary cookies are absolutely essential for the website to function properly. This category only includes cookies that ensures basic functionalities and security features of the website. These cookies do not store any personal information.
Functional
Functional cookies help to perform certain functionalities like sharing the content of the website on social media platforms, collect feedbacks, and other third-party features.
Performance
Performance cookies are used to understand and analyze the key performance indexes of the website which helps in delivering a better user experience for the visitors.
Analytics
Analytical cookies are used to understand how visitors interact with the website. These cookies help provide information on metrics the number of visitors, bounce rate, traffic source, etc.
Advertisement
Advertisement cookies are used to provide visitors with relevant ads and marketing campaigns. These cookies track visitors across websites and collect information to provide customized ads.
Others
Other uncategorized cookies are those that are being analyzed and have not been classified into a category as yet.
SAVE & ACCEPT
16 Shares
Share3
Pin11
Tweet2
WhatsApp
Telegram
Email