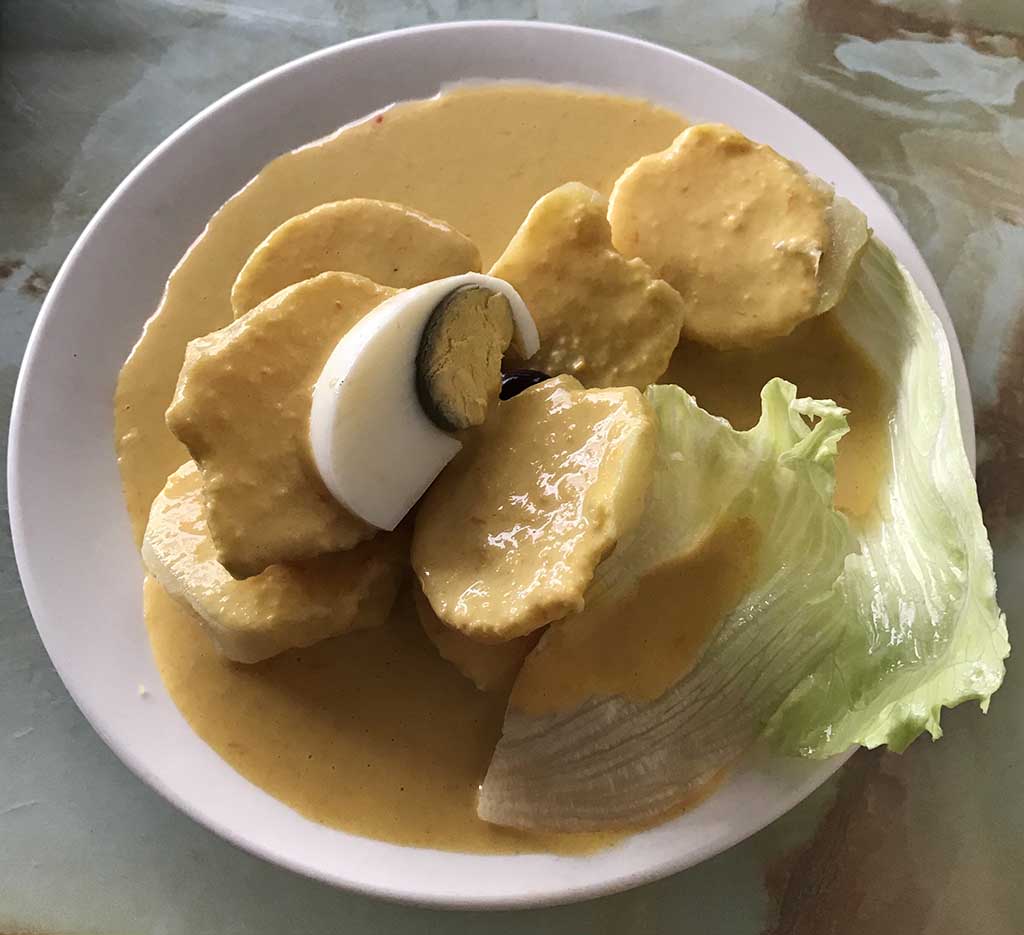 Peru in general is well-known as one of the top food destinations of Latin America, especially for its classic dishes such as Ceviche. However, Lima in particular is the place to go if you’re looking to try a range of exotic and exciting dishes to really open up your taste buds.

Where To Eat In Lima, Peru

Lima is an extremely diverse city. The capital of Peru has many cultural links with Asia and Europe, which has resulted in a unique hotpot of varying foods and dishes.

In this guide we’ll explore six of Lima’s top foods, which are a daily ritual for the locals here.
We’ll also look at how to find a good place to try Peruvian foods whilst in the capital so if you are backpacking South America or on a tight travel budget, the following dishes will more than likely be your savour in Lima and even in some other regions of Peru.

One of the main Peruvian staples can be found in pretty much all local restaurants in Lima. This dish is made up of a baked potato that has been opened up and filled with different meats such as beef, as well as onions, olives and other spices. Sometimes it’s accompanied with Ají, which is a Peruvian sauce which is a little bit spicy but gives the dish a nice kick. This dish is usually eaten as a starter, however in my case (since it’s my favorite food in Peru) I stocked up on like 4 or 5 and that was me done!

Originating from the Andes, this dish was said to have been created by an old woman who used to sell it to railroad workers who made the stop in the high altitude city of Huancayo. Over the years it then became popular throughout the country, and as a result is another main starter that can be found in many traditional Peruvian restaurants in Lima. Consisting of sliced potatoes, this dish is also served with a boiled egg. It’s then covered in a really tasty, spicy sauce that is made up of queso fresco cheese and the native ají amarillo chilli pepper.

Peru is home to a great variety of soups, with it being rumored there are over 2000 in the country (which makes sense considering there are lots of small, isolated towns and cities throughout). In Lima there is a nice variety, which are perfect to warm yourself up during the winter season (remember the winter runs from June until October due to Peru’s location in the Southern Hemisphere).

Caldo de Gallina is the most typical, and can be found pretty much everywhere in Lima. Served with a thick, delicious broth, it has a large piece of chicken along with noodles, potatoes and chives. Sancochado is another must-try, which with a large amount of ingredients such as meat, leeks, carrots, yucca, potatoes, cabbage and corn, is one for the very hungry. Sopa a la Minuta is a fusion soup which has roots from Italian settlers, which is made with ground beef, pasta, egg and ají sauce.

Known as the national dish of Peru among Peruvians, Lomo Saltado is the dish you cannot leave the country having not tried! The main ingredients are beef, french fries, and rice in a stir fry-style dish. Depending on where you go to eat, they’ll also add their own touches, mixing in extra elements such as tomatoes and onions.

The irony is this dish originated from Chinese settlers, who brought over the Chifa tradition and foods. These are now found throughout the country from the sea, to the mountains and the jungle. So no matter where your Peru itinerary takes you you’ll begin to realise why the Lomo Saltado in particular became so popular and especially now that it’s Peru’s top dish!

Ask anyone what food is from Peru, and Ceviche is the answer you’ll get. Although many countries lay claim to the origins of this dish, it’s in fact Peru that first created this seafood delight. The contrast of raw fish and meat along with citrus, as well as escabeche spices makes it one of the most incredible foods to try in Latin America.

Whilst the best Ceviche varieties are found in the north in cities such as Máncora and Trujillo, Lima is also a great place to try Ceviche. And due to its coastal location, you’ll be eating fresh fish caught that same day.

Translating directly as “steak of the poor”, this dish was once common among poorer locals in Peru who cannot afford the more expensive meats and vegetables that were only eaten by the higher classes.

Regardless of its history, this dish is a superb filler, and especially for those with a hangover with its large variety of ingredients! It consists of steak, bacon, french fries, fried plantains and a boiled egg. Whilst it may seem like many random foods thrown together (which does make sense considering its origins), it’s actually a pretty sweet combination. Just make sure you have enough space in your belly for this beast.

Where to try these foods in Lima:

Now that we’ve teased you with some of the best foods to try, let’s get you and your salivating mouth somewhere to try these foods ASAP!

For most tourists, you’ll most likely be staying in the popular, bustling district of Miraflores. Here there are many local restaurants that serve these iconic dishes at a very cheap price, especially near Parque Kennedy. In particular, there are three local eat-outs along Calle de los Pinos that I always eat at and personally recommend, with prices being very cheap.

If staying anywhere else such as in Barranco, Surco, or beyond, then my top tip here is to ask the locals! They know best where to eat in Lima, Peru, and if a place has a queue or is full, it’s usually a very good sign.

And that’s all for our bite-sized article (couldn’t resist) to the different foods of Lima. As one of the best places to visit in South America and with its many cultural ties giving rise to a variety of unique foods, Lima is an absolute must for any food lover heading to Peru.

As you’ve seen, the dishes here range from fresh seafood like Ceviche to the basic staples of Papa Rellenas and Huancaina. And that’s before delving into the unique fusion foods such as Sopa a la Minuta, Chifa, and beyond.

Now that we’ve explored Lima’s top foods in this article, the question is… are you ready to head out and try them?

Dan and George are two seasoned backpackers with extensive knowledge of Latin America who write no-nonsense backpacking guides for people who are looking to explore Central and South America. Find them on social at Backpacking Latam, Layer Culture, and George into the Jungle.

1 thought on “What to Eat in Lima, Peru”

This website uses cookies to improve your experience while you navigate through the website. Out of these, the cookies that are categorized as necessary are stored on your browser as they are essential for the working of basic functionalities of the website. We also use third-party cookies that help us analyze and understand how you use this website. These cookies will be stored in your browser only with your consent. You also have the option to opt-out of these cookies. But opting out of some of these cookies may affect your browsing experience.
Necessary Always Enabled
Necessary cookies are absolutely essential for the website to function properly. This category only includes cookies that ensures basic functionalities and security features of the website. These cookies do not store any personal information.
Functional
Functional cookies help to perform certain functionalities like sharing the content of the website on social media platforms, collect feedbacks, and other third-party features.
Performance
Performance cookies are used to understand and analyze the key performance indexes of the website which helps in delivering a better user experience for the visitors.
Analytics
Analytical cookies are used to understand how visitors interact with the website. These cookies help provide information on metrics the number of visitors, bounce rate, traffic source, etc.
Advertisement
Advertisement cookies are used to provide visitors with relevant ads and marketing campaigns. These cookies track visitors across websites and collect information to provide customized ads.
Others
Other uncategorized cookies are those that are being analyzed and have not been classified into a category as yet.
SAVE & ACCEPT
6 shares