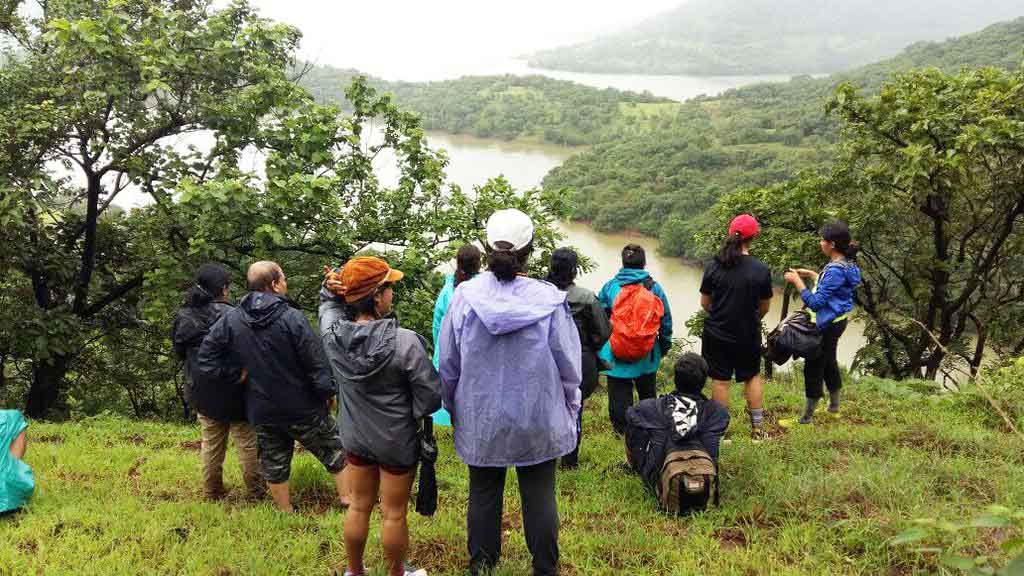 “There’s a long weekend coming up. Let’s do a short trip together”, says my friend and boss. Happy me starts dreaming of exotic locations that I cannot afford. Of course, smart boss-friend is also on a budget like me and decides that an easy trek in the rain would be perfect! She calls up one of her adventure-loving friends and set us up for a 3 day trip with this cool trekking group called Jungle Lore. Vishal from the group convinces us that the trek would be very easy and that it wouldn’t matter that we hadn’t gone trekking in years. Well, let me just say, that Vishal was wrong. 😛 It wasn’t easy, and we have the tattered clothes of my friend from the second day’s trip to prove it.

Anyways, the group would meet us at Kolhapur and take us to the almost unheard of Chandoli National Park which is about 2 hours away from there. Kolhapur is 9 hours away from Bombay, and 12 hours if there’s craploads of traffic, (which in this country there always is).

Where exactly is Chandoli National Park? Chandoli national park is a national park spread out across the Satara, Kolhapur and Sangli districts of the state of Maharashtra in India. From 1985 it acted as a sanctuary, and then was formed into a national park in May 2004, it’s much smaller than the neighboring Koyna Wildlife Sanctuary.

Me, the girl who doesn’t normally travel in buses due to motion sickness put up a fuss. Then came the strong admonishing by my boss-friend who has far worse motion sickness than me. (Yeah, she actually always calls dibs on the left side of any vehicle so she can get out easily to puke if necessary. But that maybe too much info I guess?) So I decided to go along just this once, especially since the park is a world heritage site and a wildlife sanctuary.

Kaustubh from Jungle Lore helped us book an overnight sleeper bus to get there. The bus ride was okay, but we were put in a double bed instead of single beds. My friend picks the inside and falls asleep quick. But I didn’t get much sleep on account of being bounced around all night and hit in the back or side by the railing. Though we didn’t have to stop the bus to throw up, which was good. Ha! The only two times the bus stopped was when people wanted to go to the restroom and none being around, had to find some trees. Nope, you’ll hardly ever find an inbuilt restroom on a bus in India.

Once we got to Kolhapur, we had breakfast at a local restaurant, and them were transferred to Chandoli National Park safari jeeps to make our way to the park. It took us about 3 hours to get there since almost everyone stopped on the way for snacks and drinks.

Once there, we checked into a resort in the forest, some of us in row houses, some of us in wooden cabins. The fees to enter the Chandoli forest are nominal. And internet or mobile connections were very scarce. Splendid!

The guys from the group took us on different trekking routes on different days of the trip. One of them, Jagdish was a botanist, and naturalist who knew every flower and tree, and worked as a professor on regular days. There were so many species he introduced us to, but the one I had absolutely never seen before was the white spider. The others, Amit and Kaustubh and Ashish too were well-informed naturalists and avid mountainists. They were amazing fun too!

We also came across some villagers herding cows in some parts of the forest. That’s because the Chandoli village is inside the park. Although the government has tried to relocate them to outside the buffer zone, they aren’t moving.

One of them, an old guy with barely two teeth left, was the head of one tribe that thought we had come to buy their land and wasn’t really too happy about it. Until the forest guards told them that we were just trekking, after which he smiled with his bunny teeth (like mine) and posed for a few pictures. Sampada took a beautiful pic of one of the tribal women.

The raw untouched beauty and the lush greenery is incredible. The treks were amazing. They were supposed to easy, as Vishal from the group told us over the phone, but they turned out to be medium-level treks. We slid and slipped, splashed around in the mud, trudged through rivers, hung on to trees for dear life, but had awesome fun.

Midway during one of the treks, while stopping to take our pics, one of the others in the group asked if my boss and me were lessers, since he was bi. Unfortunately for him, we weren’t. We’re just good friends. And thankfully, boss and I have different taste in guys, so no competition there.

We also did a few safaris, morning and evening where we tried to sight tigers, but we were unlucky. The only things we saw were cats, deer, squirrels and bison. Better luck next time!

Meeting the forest guards at the Chandoli Forest Office

The last afternoon we stopped at the forest office to meet Mr. Palve, the officer in-charge of the forest park. He and all of his staff were very helpful and informative. Two of the forest guards accompanied our group on the trails. One of them is an amazing photographer too. His shots of the wildlife, especially the birds and tigers were amazing. I wish I had asked him for some of them to share on here. Will try the next time, I promise.

One evening trek to a waterfall was almost cancelled because everyone was tired from the morning trek. We’re lucky it didn’t get cancelled! Out of almost 25 people, only 3 of us gals, 1 guy, 1 of the trip organisers and 1 local guide decided to go. We had expected to down the river, but it turned out it was a 50 or 60 feet drop from the waterfall, so we made our way down along the mountainside.

Slipping and sliding again, getting bruised by trees, and thorns, and cutting our knees on rocks along the way. Loved it! I hadn’t done this before, so most of the times was hanging on to trees or the tour leader Kaustubh for dear life. Thankfully, he’s an amazing guide and took us down safely. Once we got down to the bottom, the local guide told us that we were the first group to go all the way down to the waterfall, and especially the first group that had women in it. He said women usually got scared part way down and opted out. But we made it. It was the highlight of the trip for us. This pic of us under the waterfall taken by Anuradha is good, isn’t it?

Panhalgad or Panhala Fort in Kolhapur

On the way back to civilization, we stopped at the magnificent Panhala Fort aka Panhalgad (meaning ‘the home of serpents’), which was part of the Bijapur trade route in Maharashtra and of strategic importance.

Panhala saw a lot of action from battles between the British, the Mughals and the Marathas. The most important battle was the battle of Pavan Khind, on 13th July, 1660 between Baji Prabhu and Adilshah.

With over 7 km of fortifications and a perimeter of 14 km, Panhalgad fort is one of the largest in the Deccan. Much like the majestic and strong Masada fortress, Panhalgad had a hidden well called Andhar Bavdi (which also means hidden well or dark well). But unlike Masada, it also has a network of underground tunnels providing a means of escape. One of the tunnels is almost a kilometre in length, although visitors don’t have access to them now.

Anyways, it was a great couple of days. Met some interesting people and made new friends on this trip. I did see a tiger on the next trip to Ranthambore and then again in Pench jungle camp. But on this one, just spending time mucking about with nature was more than enough, and it definitely is a must do!

To book this trip or something similar contact Kaustubh at +919987126233. He might give you a discount if you tell him you got his info from Abby at TheWingedFork.

Other Posts About India to Read

This website uses cookies to improve your experience while you navigate through the website. Out of these, the cookies that are categorized as necessary are stored on your browser as they are essential for the working of basic functionalities of the website. We also use third-party cookies that help us analyze and understand how you use this website. These cookies will be stored in your browser only with your consent. You also have the option to opt-out of these cookies. But opting out of some of these cookies may affect your browsing experience.
Necessary Always Enabled
Necessary cookies are absolutely essential for the website to function properly. This category only includes cookies that ensures basic functionalities and security features of the website. These cookies do not store any personal information.
Functional
Functional cookies help to perform certain functionalities like sharing the content of the website on social media platforms, collect feedbacks, and other third-party features.
Performance
Performance cookies are used to understand and analyze the key performance indexes of the website which helps in delivering a better user experience for the visitors.
Analytics
Analytical cookies are used to understand how visitors interact with the website. These cookies help provide information on metrics the number of visitors, bounce rate, traffic source, etc.
Advertisement
Advertisement cookies are used to provide visitors with relevant ads and marketing campaigns. These cookies track visitors across websites and collect information to provide customized ads.
Others
Other uncategorized cookies are those that are being analyzed and have not been classified into a category as yet.
SAVE & ACCEPT
94 shares