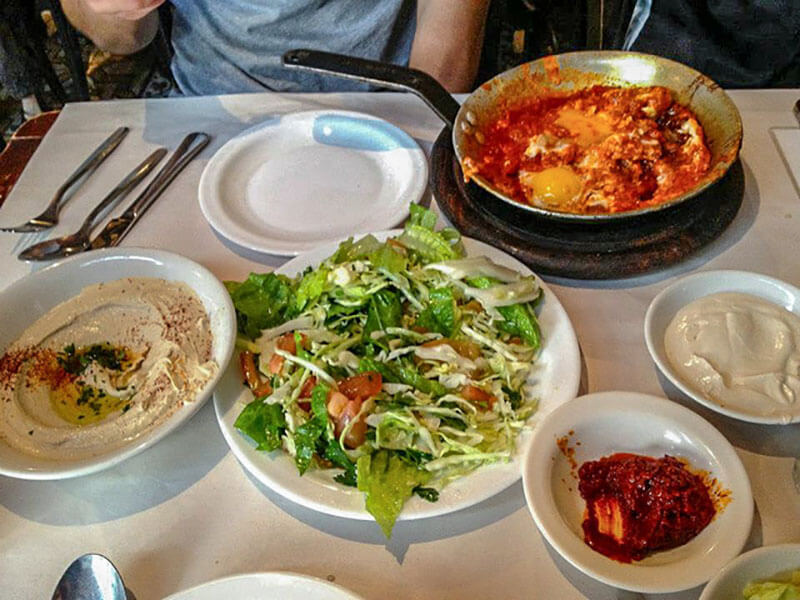 Israel has the best food in the world.

I may be slightly biased since I lived there for 5 years, but the fresh produce; incredible dips like hummus and tahini; and the Middle Eastern take on Mediterranean food is hard to beat.

While there are countless must-see places in Israel, one of my favorite cities to visit in Israel is Jaffa, which is a smaller Arab village that is a part of the greater Tel Aviv area. For those who don’t know, Tel Aviv is Israel’s second-largest city, and it sits on the Mediterranean Sea – as does Jaffa.

While nightlife in Tel Aviv is a major draw for both tourists and locals, head just a little south and you’ll find a thriving culinary scene. Jaffa (known as Yafo in Hebrew) offers a mix of both Jewish and Arab populations, making it incredibly rich and diverse in both food and culture. Keep reading for a look at all the must-see areas and restaurants in Jaffa, Israel.

When visiting Jaffa, the Namal is a great place to start – both for the views and the food. As you can probably derive from the name, the Namal is an active port where you will often see boats docking or setting out.

If you are a beach lover, there are also several beaches you can visit within walking distance of the port. The water in the Mediterranean is warmer than many oceans, and you can find swimmers, surfers and paddle boarders enjoying the water year-round.

For food, there a number of excellent restaurants in the Jaffa port, but my personal favorite is The Old Man and the Sea. This restaurant takes the adage “more is better” to an entirely new level, virtually guaranteeing that you will be stuffed before your main course arrives.

The beauty of the Old Man and the Sea is that they serve dozens of small salad plates as soon as you’re seated, filled with local favorite likes falafel, pita bread, hummus, tabbouleh, baba ganoush, mixed Israeli salad and many more. You also have several selections for the main course, including fish, meat and chicken.

My advice: make sure to eat here when you’re really hungry, because the amount of food is hard to keep up with, but it’s also so delicious you’ll have a hard time stopping.

Easily the most famous hummus restaurant in Jaffa, if not all of Israel, Abu Hassan is a hole-in-the-wall hummus joint near the Jaffa Port with options to take out or eat in. Either way, be prepared to wait in a massive line, especially if you go during the weekend. Often, patrons who wanted to eat in but decided against waiting for a table can be found lounging on the curb and benches nearby eating their hummus.

To clarify, hummus restaurants in Israel typically only serve hummus and pita with very minimal add-ons, such as falafel. These staples are simple and delicious, but if you’re looking for a wide variety you won’t find it here.

The Jaffa Clock tower isn’t something you need to specifically set out to see, it’s more a beautiful site that you’re likely to encounter as you walk around Jaffa. The clock tower is set on one of the main roads running through Jaffa, called Yefet Street. While the street itself is a fairly busy thoroughfare, you will likely need to cross it at some point during your visit, meaning the clock tower is a worthwhile stop for a quick photo.

There are also several small coffee shops not far from the clock tower, including Aroma, the Israeli version of Starbucks. While the coffee is decent but mind-blowing, it’s worth a try if you want to feel like a local.

Also near the clock tower is one of Jaffa’s most famous restaurants – Dr. Shakshuka. The term shakshuka refers to a traditional Israeli dish, made up of tomato paste and eggs cooked in a small skillet. It might sound weird (and to be totally honest on my first visit I thought it was lasagna that people were eating for breakfast), but it’s delicious and a must-try while in Israel.

The Jaffa Flea Market is the city’s main feature, with dozens of small eateries, coffee shops and boutiques stuffed into a few small streets. You will find everything here from an actual flea market (hence the name) to curbside fruit venders and expensive boutiques.

I recommend taking some time to just wander the streets of the flea market area, stopping to shop in the various boutiques and later grab a bite to eat. However, don’t be deceived by the name “flea market”: in addition to the flea market itself there are also numerous boutiques that are quite expensive. Make sure to check prices before heading to the check-out counter, or you might have a nasty surprise when you see the bill.

In terms of food, it’s hard to recommend just one place at the Jaffa Flea Market, but I’ve narrowed it down to my two all-time favorites.

For good, unique food and a relaxing atmosphere, head to Cafe Puaa, where you can find traditional food that’s done really, really well. While you will likely love nearly everything on the menu, many customers rave about Puaa’s moussaka, a traditional Middle Eastern dish. They also have excellent coffee, so if you need a mid-day pick-me-up, this is a good place to visit.

My other favorite for a guaranteed good time is Albi, a Greek-style restaurant that has open-air seating and generally turns into one big party on the weekends. Albi has good food, but the main event here is the Arak, a traditional Middle Eastern liquor. If you want to mix it in a drink, try ordering an Arak lemonana, which is a mix of lemon and nana, the Hebrew word for mint.

That wraps it up for my recommendations of where to visit and eat in Jaffa, Israel! I hope this look at some of the city’s best restaurants and sites helped you find a few places to try on your trip! Have you been to any of these places previously? If so, comment and let me know what you thought!

Author : Denise from The Navy Blonde

Denise is a blogger and entrepreneur who runs @thenavyblonde on Instagram and The Navy Blonde blog. Before she began blogging, Denise was an international TV news anchor and worked for major media outlets, creating and editing viral multi-media for audiences all over the world. Having traveled to dozens of countries, she currently resides in Portland, OR and is passionate about style, travel, and helping others live their best life.

Where to eat in other Cities