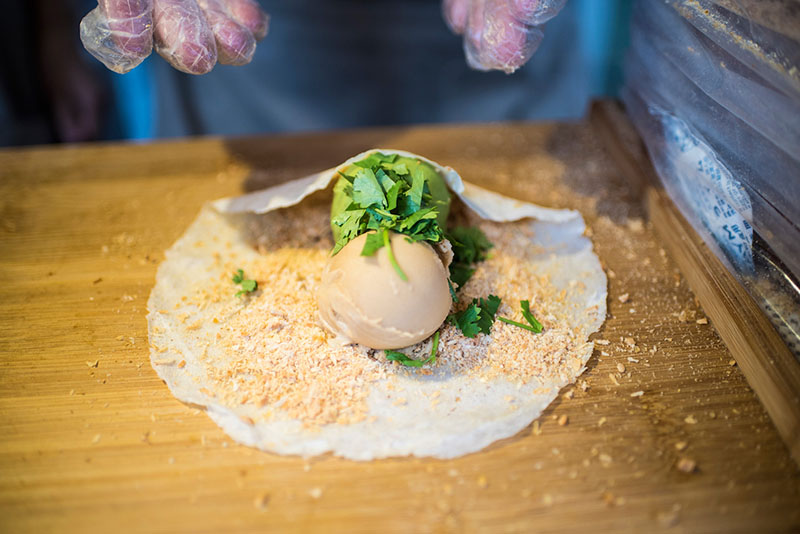 Taipei has more than earned its reputation as one of the best food cities in the world. However, deciding what to eat in Taipei can be a process of elimination that’s too difficult for many travelers, especially if it’s your first time in the city, if you only have a few days or if you simply have an endless appetite (guilty!).

The good news is that I’ve done the work of getting to know Taipei food, both during the half-dozen trips I’ve taken to the city over the past several years, as well as in the time that’s passed since I moved here earlier this summer. I consider this list to include the best of the best, though I include the caveat that every entry is merely a starting point.

Indeed, the mouth-watering tips I’m about to lay out blend well with the Taipei itinerary I’ve created, both the edible parts of it and all the ways you can work off the calories you consume. Speaking of which, I’m getting hungry—so let’s get started!

What is Taiwanese Cuisine, Anyway?

It’s no surprise that defining Taiwanese food is difficult—the world seems to have a difficult time defining Taiwan itself, starting with the island’s political status.  Obviously, Chinese flavors and cooking techniques have a huge influence on Taiwanese food, given that the majority of people who now call themselves Taiwanese originated in mainland China between 75-100 years ago, during the Chinese Civil War.

However, as the entires on my Taipei food guide illustrate, Taiwanese cuisine is nothing if not an eclectic tapestry. From Hakka flavors that migrated over from Fujian province, to Japanese quirks that linger after 50 years under the rule of the Emperor, Taiwanese food is an amalgam of many different cuisines and at the same time, something all its own.

What to Eat in Taipei (to Start!)

When it comes to the best restaurants in Taipei, few are more iconic than Din Tai Fung, whose original location sits just outside Dongmen Station. I’ll let you in on a little secret, however: Din Tai Fung is not worth the massive queue you’ll encounter anytime of day. Instead head down Yong Kang Street to Jin Ji Yuan, where dim sum bliss awaits. Choose classic xiao long bao dumplings filled with pork, or shrimp siu mai, which are almost too beautiful to eat.

Most lists that describe must-eat Taipei foods stick to the city center—this isn’t one of them. With this being said, just because duck rice paradise Angelica is located 20 minutes north of Taipei Main Station, in Shipai, doesn’t mean you have to think of it as out of the way. Hit up this super local spot, whose herbal duck ball soup is just as good as its yā fàn, on your way to the city back from Tamsui Fisherman’s Wharf.

Although you might not know any Hakka dishes off the top of your head, the flavors are welcoming and even familiar in some cases. I have a piece of advice for your trip to Blossom, which is located in Taipei’s busy Zhongshan district near Xingtian Temple station. Bring a friend (though not necessarily one who speaks Chinese—the menu is bi-lingual!). Rather you’re going to need some help, whether you chow down on chicken stew with bitter yams or savor classic salted chicken.

Perhaps the most iconic Taiwan street food in Taipei or otherwise, cōng yóubǐng scallion pancakes are available at dozens of spots throughout the city. My personal favorite, however, is Chong Yao Ping, which is located in the heart of the Ximending pedestrian area. Like most scallion pancake stalls, this one offers several flavors, but the “black pepper pork chop” one is really to die for. And I say that as someone who lives across town!

I realize that this is a round-up of what to eat in Taipei, but my favorite bubble tea (an iconic Taipei beverage if there ever was one) is actually found at Stall 60 of Keelung Night Market, which is about 45 minutes by train (and then 15 minutes by foot) from Taipei Main Station. What sets this tea apart? The bubbles, of course! Cooked fresh in a wok right at the stall front, these spheres of tapioca heaven are cooked with brown sugar, which melts into them—and, therefore, your tea!

I have no idea if the bizarre spring roll concoctions sold up and down Dihua Street are among the most iconic Taiwanese desserts, but they’re certainly among the most delicious I’ve ever had. Into what I can only describe as a sweet egg roll wrapped, the master of your sweet desires will sprinkle a thin layer of finely-ground peanuts, which she’ll top with two scoops of vanilla ice cream plus—stay with me on this one—a sprig of cilantro. Does it make sense? No. But love never does.

Indeed, so many lists of what to eat in Taipei skip out on desserts that I thought I’d name two—and give you a hack you’ll very much appreciate. While the main location of Smoothie House on Yong Kang Street (which has nearly a dozen different types of fruit ice on its menu) always has a long queue, the secondary location two blocks over on Lishui Street has far lighter crowds, but the same delicious flavors!

What to Do in Taipei (Besides Eat)

Your caloric intake is going to be high in Taipei, even if you’re someone who usually eats a lot (guilty!) and never counts calories (also guilty!). The great news, as I alluded to earlier in that article, is that when it comes to where to go in Taipei, many places involve walking or even hiking. This includes climbing to the top of the popular Elephant Mountain (Xiang Shan) viewpoint, enjoying lush Da’an Forest Park or traipsing through some of the streets where you find delicious Taipei food, like Ximending and Yong Kang Street.

Many day trips from Taipei also have a hiking component, whether you continue beyond the (overrated) “Queen’s Head” monument at Yehliu Geopark onto the mountainous peninsula that juts into the sea beyond it, or take an excursion-within-an-excursion from historical Jiufen and ascend Teapot Mountain, aka Chahu Shan.

What to Eat Elsewhere in Taiwan

Many of the destinations you find in my larger Taiwan itinerary have their own special foods. From aboriginal specialties and local takes on Taipei classics (namely, a scallion pancake with a sunny-side up egg instead of a scrambled one!) in Hualien, to Danzai shrimp soup noodles in Tainan, which is Taiwan’s former political capital and arguably, it’s alternative food one, Taiwan is delicious from north to south.

Taipei is also not the end-all-and-be-all when it comes to Taiwanese night markets, even though I have mentioned several of them in this post. Kaohsiung‘s Liuhe and Ruiefong night markets are particularly enjoyable if you happen to be in that part of the country, Taichung’s Fengjia and Huayuan Night Market in Tainan are also worth a visit.

I’ll admit: This post only really scratches the surface of what to eat in Taipei, especially if you’ve never been to the city. While you’re waiting in line for scallion pancakes in Ximen, you’ll likely spot a dessert someone is flinging in a far-off stall of the night market.

A trip to Keelung Night Market for any purpose is a Pandora’s box for even the most insatiable appetites. Whatever your culinary preferences, Taiwan is always a destination that demands second and third helpings—for its food, and otherwise.

Robert Schrader has been addicted to Taiwanese food since long before he moved to Taipei, but now the sickness is even more advanced! He already has many articles about both Taiwan and its capital on his blog, Leave Your Daily Hell, but you can bet more will be coming over the next few weeks and months. Another way to keep up with Robert’s travels is to follow Leave Your Daily Hell on Facebook and Instagram.

Other Popular Posts About Asia

This website uses cookies to improve your experience while you navigate through the website. Out of these, the cookies that are categorized as necessary are stored on your browser as they are essential for the working of basic functionalities of the website. We also use third-party cookies that help us analyze and understand how you use this website. These cookies will be stored in your browser only with your consent. You also have the option to opt-out of these cookies. But opting out of some of these cookies may affect your browsing experience.
Necessary Always Enabled
Necessary cookies are absolutely essential for the website to function properly. This category only includes cookies that ensures basic functionalities and security features of the website. These cookies do not store any personal information.
Functional
Functional cookies help to perform certain functionalities like sharing the content of the website on social media platforms, collect feedbacks, and other third-party features.
Performance
Performance cookies are used to understand and analyze the key performance indexes of the website which helps in delivering a better user experience for the visitors.
Analytics
Analytical cookies are used to understand how visitors interact with the website. These cookies help provide information on metrics the number of visitors, bounce rate, traffic source, etc.
Advertisement
Advertisement cookies are used to provide visitors with relevant ads and marketing campaigns. These cookies track visitors across websites and collect information to provide customized ads.
Others
Other uncategorized cookies are those that are being analyzed and have not been classified into a category as yet.
SAVE & ACCEPT
153 shares