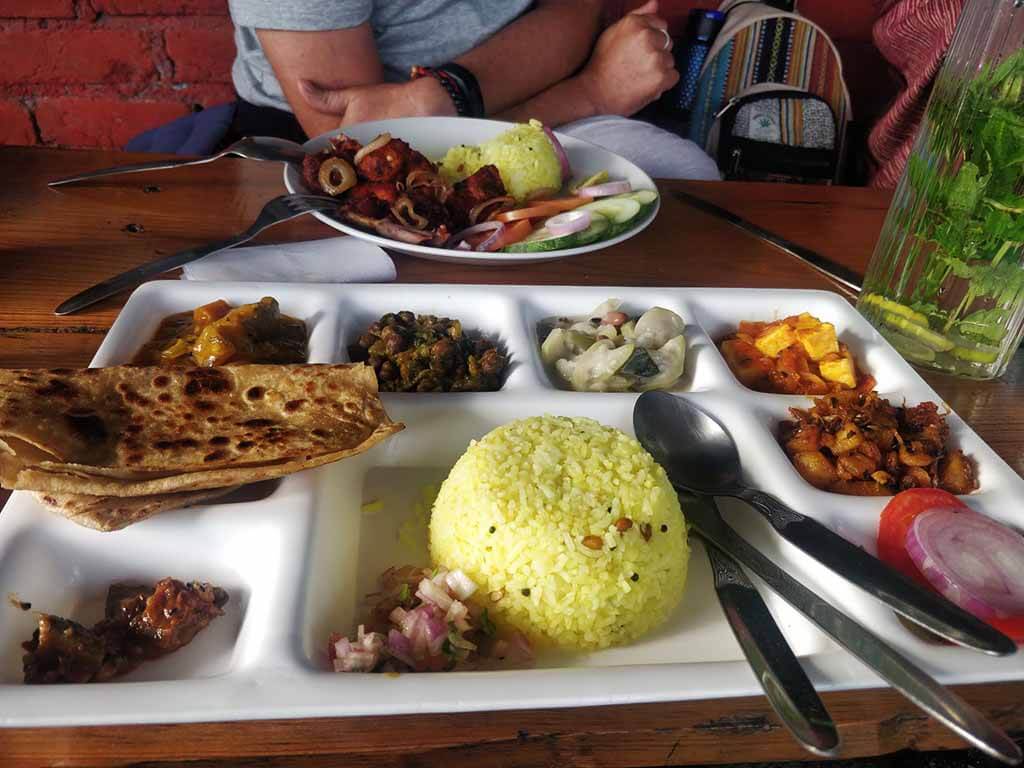 Dharamshala, the scenic city of Himachal Pradesh, is located in the Kangra Valley of the state. Dharamshala and its many small villages are known for the snow-capped Dhauladhar mountains. But the area is also popular around the world as Dharamshala is the home of the 14th Dalai Lama who migrated there with other Tibetans in 1959.

Amongst other things, people go to Himachal Pradesh specifically for doing yoga in Dharamshala, trekking in Dharamshala, and hanging out around the state hoping to attend one of the many discourses that Dalai Lama gives every year.

While there are a plethora of things to do in Dharamshala, the most favorite activity for some people there is to try the different food of the region. Dharamshala, located in Himachal Pradesh and close to Punjab, has a prevalent Punjabi food culture. Then due to its vicinity to the northern states of India, you find a lot of North Indian food there. And as Dharamshala has been rising as a tourist destination for many decades, many international cuisines such as Lebanese, Mexican, Continental are present in abundance.

On top of all of this, there are tonnes of organic and healthy food options that tempt the yoga and meditation practitioners with their big menu cards.

Where ever you are in Dharamshala, you have plenty of options to eat always. And if you head above to Parvati Valley (reachable by a bus ride from Dharamshala) then the food changes a bit but it feels as if the food in Parvati has also been inspired by Kangra Valley. You will be able to find all the North Indian, Punjabi, and Continental food options in Parvati, too.

Overall, Himachal Pradesh is a really good place for food lovers of all kinds. In this article, we will talk about the various foods to eat in Dharamshala.

All these Punjabi dishes can be found in small dhabas or eateries of Dharamshala and its villages. Mcleodganj(a small town in district Dharamshala) also has a fair collection of restaurants serving Punjabi food items. Small roadside stalls of Mcleodganj serve delicious rajma rice and kadhi rice (yoghurt curry). Look near the bus stand for these stalls. Lower Bhagsu is dense with Punjabi food, more than Upper Bhagsu which is more of a high-end restaurant and cafe sort of a place.

Whatever happens, do not miss to eat Palak paneer and garlic naan when you are in Dharamshala for the garlic and spinach are locally sourced and if you are lucky, the paneer would be homemade, too.

As Dharamshala has a heavy influx of international tourists, continental cuisine is easily found here.

Burgers and chips are common, sandwiches of all kinds are eaten with coleslaws, pizza(wood-fired too) with various toppings are available throughout, then there are bakery items, and fish and chips.

Dharamshala has these yummy mushroom and spinach burgers in most continental restaurants. They are served with homemade potato fries. Do try.

Continental restaurants aren’t hard to be located. They are as common in Dharamshala city as in the tiny villages of Bhagsu and Dharamkot. But continental food costs more than all other kinds of food.

Dharamshala is rich with many street food options. From paneer and mushroom momos to samosa and tiki and gol-gappa, you can find it all in Dharamshala.

The best place to eat street food in Dharamshala is the lower Bhagsu village and Mcleodganj. Upper Bhagsu and Dharamkot are more restaurant studded places. In Mcleodganj, the central square of the town and the streets that run from it have a myriad of street food options. Shops selling chaat line the Dalai Lama Temple road.

In Lower Bhagsu, you can find anything from Maggi to chole bhature. Prices vary as per the stall and the location.

As Dharamshala has been home to Tibetan people since 1959, no doubt that the food there is now heavily influenced by the Tibetan food culture. There are also a lot of Tibetan restaurants and small food joints run by migrant families.

The most favorite items of Tibetan food are the various noodles and noodle soup preparations— both vegetarian and non-vegetarian, Tingmo-the Tibetan bread, manchurians and other curries, various Tibetan stir-fries of kale, asparagus, mushrooms, meat, cauliflower, etc, and other one-bowl preparations.

One of my favorite places to eat Tibetan food in Dharamshala is the Tibet Kitchen located on Mcleodganj main Square. The place gets really crowded so head there at non-meal times or just be ready to wait for a longer.

But apart from Tibet Kitchen Mcleodganj is full of tiny family-run kitchens which are often behind curtains but if you knock, someone would emerge from behind the curtain, ask you to take off your shoes, and will be happy to serve you some of their most traditional food items.

Dharamshala has a lot of Israeli population so you will stumble into Israeli eateries every few streets. My Israeli friends told me that the food wasn’t as good as it was back home but it was still okay to have it once in a while to keep those cravings from becoming intolerable.

The various Israeli food items to try are the Shakshuka, falafel and pita, hummus, and shawarmas. Some good places to eat Israeli food are located in Upper and lower Bhagsu and Dharamkot as most Israeli travelers stay in those areas.

Himachali Dham is not only the traditional food of Dharamshala but of the entire Himalayan State. The Dham is considered both homely and auspicious and people eat it on special occasions and also on regular days.

Dham comprises of rice, dal, chana, vegetable preparations, and salad. It is generally very affordable. The best place to eat Dham in Dharamshala is in the town of Mcleodganj for Dham is not sold that commonly in the more cosmopolitan villages of Dharamshala.

All Dharamshala food is incomplete without the ubiquitous masala chai of Himachal Pradesh. Himachali Masala chai is not just a concoction of tea and milk and ginger. The people there make it with a special chai masala and cook it with enough milk and water for a while. The chai is served in a tall glass at all times.

The masala chai costs about 30-40 Indian rupees and is a must-have in the cold weather of Dharamshala.

Bonus tip: Do try the Bhagsu cake when in Bhagsu village. The best and the oldest shop serving Bhagsu cake is in Upper Bhagsu.

Another Bonus tip: Restaurants in Dharamshala make a mild version of all Indian food. They reduce the spice level on their own so that the food suits all palettes. If you are looking for at least a little bit of spice in your food, do talk to the restaurant chef/server. At times I couldn’t eat the curries or dal because they just tasted bland and flavorless. Avoid that situation by having a conversation with the server while ordering your food.

Which food options from Dharamshala did you like the most? Please do tell us in the comments.

Priyanka Gupta is an itinerant writer from India who left her investment banking career to travel the world and write. She focuses on culturally immersive travel while relishing local delicacies and never misses a chance to see wildlife. Priyanka always looks out for sustainable and local-community-driven offbeat experiences.

Read Priyanka’s best life ideas and travel stories on her personal growth and travel blog On My Canvas. You can follow Priyanka on Twitter, Facebook, and Instagram to get live updates on her journey.

This website uses cookies to improve your experience while you navigate through the website. Out of these, the cookies that are categorized as necessary are stored on your browser as they are essential for the working of basic functionalities of the website. We also use third-party cookies that help us analyze and understand how you use this website. These cookies will be stored in your browser only with your consent. You also have the option to opt-out of these cookies. But opting out of some of these cookies may affect your browsing experience.
Necessary Always Enabled
Necessary cookies are absolutely essential for the website to function properly. This category only includes cookies that ensures basic functionalities and security features of the website. These cookies do not store any personal information.
Functional
Functional cookies help to perform certain functionalities like sharing the content of the website on social media platforms, collect feedbacks, and other third-party features.
Performance
Performance cookies are used to understand and analyze the key performance indexes of the website which helps in delivering a better user experience for the visitors.
Analytics
Analytical cookies are used to understand how visitors interact with the website. These cookies help provide information on metrics the number of visitors, bounce rate, traffic source, etc.
Advertisement
Advertisement cookies are used to provide visitors with relevant ads and marketing campaigns. These cookies track visitors across websites and collect information to provide customized ads.
Others
Other uncategorized cookies are those that are being analyzed and have not been classified into a category as yet.
SAVE & ACCEPT
54 shares