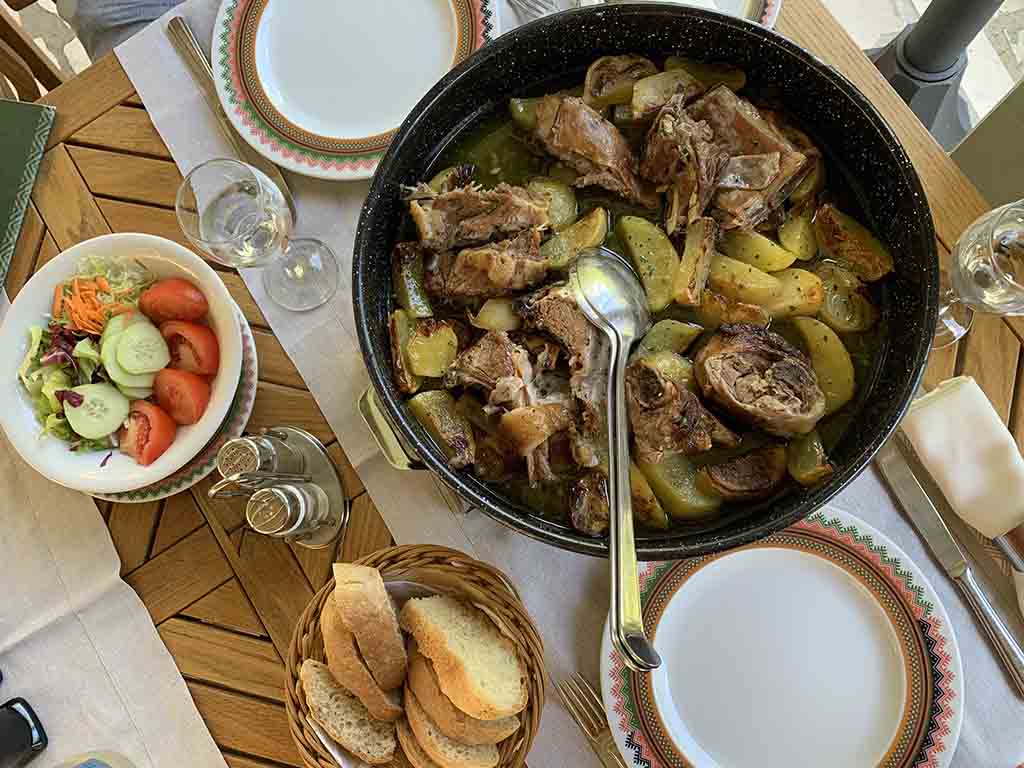 Eating your way through any country is one of the best ways to get to know the culture, and Croatia is no different.

Traditional Croatian food is varied since the country was under the influence of many different empires. Austria, Hungary, Italy, and Turkey have all influenced Croatia’s cuisine. For this reason, it can sometimes be hard to distinguish dishes that are exclusive to Croatia.

Over the years, Croatia has adopted many foods from various cultures and made them its own. While you may notice some similarities to other neighboring countries, Croatian dishes have their own distinct taste.

Croatia can be divided into several different regions, each famous for its own particular dishes. While there are officially seven different regions, we’ll be focusing on four in this post: Slavonia, Central Croatia, Istria, and Dalmatia.

Now that you know a little bit about Croatia’s history, let’s get into what to eat in Croatia!

Central Croatia is home to the country’s capital of Zagreb, a cool city that boasts a fusion of foods from all over the country.

Traditional Central Croatian food has many similarities to dishes that you would find in Austria, Germany, and other central European countries. Typical food from this region consists of meat served with a side of potatoes, cabbage, or other root vegetables.

Similar to a Cordon Bleu and Austrian Schnitzel, Zagrebacki Odrezak is veal stuffed with ham and cheese, which is then breaded and deep-fried. This is a classic comfort food for many Croatians from this area and is a must-try dish when you are in Zagreb! Zagrebacki Odrezak is typically served with a side of traditionally prepared braised potatoes and homemade bread.

Famous from the Zagorje region, štrukli is a lasagna-like dish that is made from dough, fresh cheese, and heavy cream. They can be baked or boiled and can be served savory or sweet.
My favorite way to order them is baked with sugar on top – it is an amazing melt-in-your-mouth combination.

A typical dish hailing from the Zagorje region is Purica s mlincima, which is oven-roasted turkey served with a type of pasta known as mlinci. Mlinci looks like a dry, thin, flatbread that is then broken up and quickly doused in hot water to cook. After the turkey and the mlinci are done, the sauce from the turkey pan is poured over the mlinci and mixed.

This dish is one of those homemade meals that just warms your soul.

Kremšnita is the Croatian version of a mille-feuille, made with vanilla custard sandwiched between strips of flaky, puff pastry dough. They are best eaten chilled, and you can find them in many Croatian dessert shops. However, if you want to sample the real deal, then take a day trip to Samobor, a small town located just thirty minutes away from Zagreb.

This city is so famous for its kremšnite, that there are almost always lines of people waiting to get a slice of these delicious custard cakes.

Slavonia is Croatia’s most eastern region, bordering the countries of Hungary and Serbia. This particular area is still relatively underdeveloped when it comes to tourism, as most visitors to Croatia head straight to the country’s coast.

However, Slavonia boasts some of the most incredibly flavorful dishes made with love. People from Slavonia are very proud of where they come from, and this is evident through the way that they prepare their food. In Slavonia, two main ingredients you’ll find in most dishes include pork and red paprika.

Cobanac is Slavonia’s most famous dish. It is a traditional meat stew that is cooked in a copper pot strung over an open fire for several hours. This dish is particularly popular among meat-lovers as it typically features a combination of different meats including beef, lamb, and pork. Cobanac would not be complete without a mix of sweet and hot ground paprika, which gives the dish its infamous vivid color.

This vegetable stew is a dish that can be eaten on its own, or as a side dish served alongside meat or fish. Sataraš is most often made with peppers, onions, tomatoes, garlic, and parsley which are first fried together and then gently stewed. It is very similar to the Hungarian dish, lecsó, which is quite popular in southeastern Europe.

Fiš paprikaš is a traditional stew that is cooked in a cauldron over an open fire. Inspired by neighboring Hungary, this spicy fish stew is made with loads of paprika and a combination of freshwater fish such as carp and catfish.

Istria is the westernmost region of Croatia that makes up the entire western peninsula. This area of Croatia is strikingly similar to Italy in both its looks and cuisine. However, Istria has its own typical dishes and cooking techniques.

Istria is the truffle capital of Croatia. This prized ingredient was discovered in the dense forests of Motovun 80 years ago and has since transformed the region into a mecca for culinary enthusiasts.

When in Istria, you’ll find truffles on everything – eggs, sandwiches, pastas, you name it – you can have truffles on it. In addition to a wide array of truffle dishes, Istria boasts a large number of truffle products like cheeses, oils, spreads, and even sweets, which make the perfect souvenirs.

Istrian beef is of superior quality, and can even be compared to world-famous meats like Argentinian steak. For the ultimate experience, give boskarin steak a try. Boskarin is a type of Istrian ox and a symbol of the region that produces incredibly mouthwatering steaks.

Fuži is a type of handmade pasta often served with different stews and sauces that include mushrooms, truffles, beef, or shrimp. The pasta dough is rolled out into a thin sheet and cut into strips which are then cut diagonally, creating a diamond shape. Fuži can be found in restaurants throughout the region and in stores so that you can try your hand at preparing it at home.

Southern Dalmatian food can be found along the Dalmatian coast and on the islands. This type of food relies heavily on fish and green vegetables often seasoned with rosemary and plenty of olive oil. The cuisine in Southern Dalmatia is what you would picture when you think of a typical Mediterranean diet.

“Riba na gradele” or grilled fish is something that you will find on almost every Croatian menu. This is a staple meal of Dalmatian cuisine and a dish that many Croatian families eat at home on the regular. The most popular fish are sea bream or sea bass, but other types of fish are grilled as well. This classic Dalmatian dish is always served with a side of boiled potatoes and Swiss chard.

While traveling down the Croatian coast, you will notice that almost every single restaurant will have Black Risotto on its menu. This seafood risotto is made from squid and cuttlefish, whose ink gives the risotto its famous black color. In addition to squid and cuttlefish, this risotto often contains other types of seafood like mussels and shellfish.

“Peka” is actually a traditional way of preparing different meats and vegetables under a bell-like lid that is cooked slowly over embers. A peka is often made with lamb, chicken, and octopus. In addition to the meat, vegetables like potatoes and carrots are added along with oil and other spices. Because of the slow cooking time, the meat comes out juicy and tender, while the potatoes and other vegetables absorb the sauce.

Gregada is a traditional Dalmatian fish stew. The fish is cooked in white wine with potatoes, onions, parsley, and garlic, and is a very typical dish found on the islands. The island of Hvar is an excellent place to taste this savory meal.

What to Eat in Croatia: Conclusion

That wraps up what to eat in Croatia! These 14 dishes are an excellent introduction to Croatian cuisine and are worth seeking out when visiting this beautiful Mediterranean nation.

Bon appetit! Or as we say in Croatia, “Dobar tek!”

About Olivia, The Author

In 2014, Olivia left her home in the United States to study abroad in Croatia. Soon after moving, she completely fell head over heels for the Mediterranean lifestyle and has been living in Zagreb, Croatia ever since! She began Inspired by Croatia to provide local tips and exclusive insights for discovering Croatia off the beaten path. Follow Olivia of Inspired by Croatia on Instagram and Pinterest.

This website uses cookies to improve your experience while you navigate through the website. Out of these, the cookies that are categorized as necessary are stored on your browser as they are essential for the working of basic functionalities of the website. We also use third-party cookies that help us analyze and understand how you use this website. These cookies will be stored in your browser only with your consent. You also have the option to opt-out of these cookies. But opting out of some of these cookies may affect your browsing experience.
Necessary Always Enabled
Necessary cookies are absolutely essential for the website to function properly. This category only includes cookies that ensures basic functionalities and security features of the website. These cookies do not store any personal information.
Functional
Functional cookies help to perform certain functionalities like sharing the content of the website on social media platforms, collect feedbacks, and other third-party features.
Performance
Performance cookies are used to understand and analyze the key performance indexes of the website which helps in delivering a better user experience for the visitors.
Analytics
Analytical cookies are used to understand how visitors interact with the website. These cookies help provide information on metrics the number of visitors, bounce rate, traffic source, etc.
Advertisement
Advertisement cookies are used to provide visitors with relevant ads and marketing campaigns. These cookies track visitors across websites and collect information to provide customized ads.
Others
Other uncategorized cookies are those that are being analyzed and have not been classified into a category as yet.
SAVE & ACCEPT
15 shares