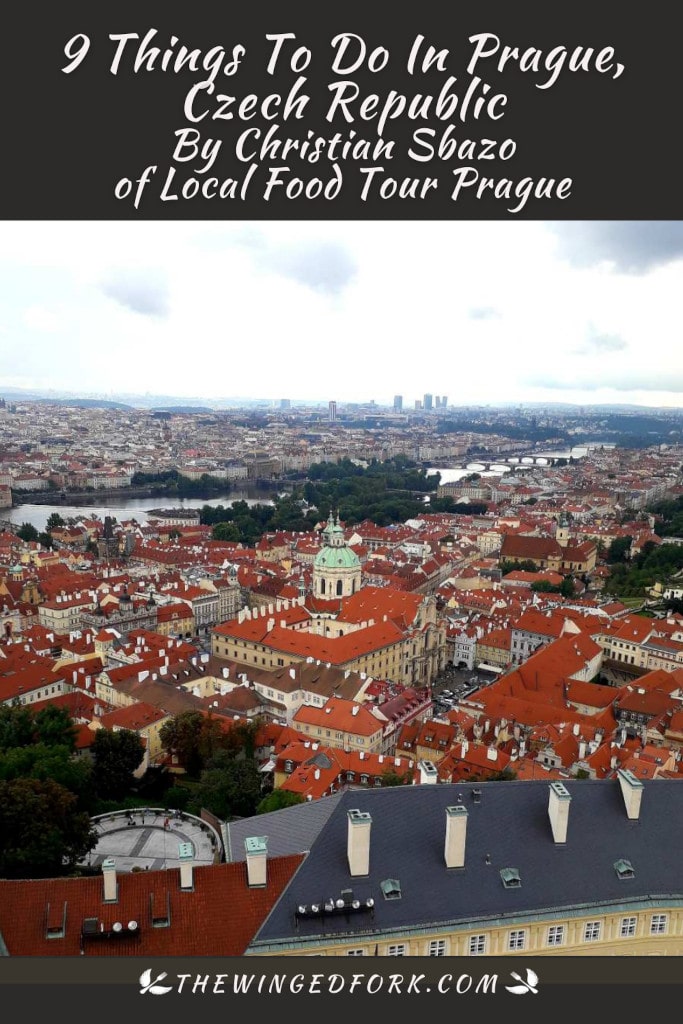 Prague is a European city that is becoming increasingly popular among travelers. It attracts them for many different reasons such as rich history, architecture, churches, romance, culture, food, beer, nightlife, and more. Sometimes it’s hard to choose from all that variety especially in case you have limited time on your travels. This list will get you started by describing 9 Things to Do in Prague from a local perspective.

Where to stay in Prague

We’ve marked these attractions on the map so you can choose some Prague hotels closer to your favorite attractions.

1. Get The Best View of Prague

Prague is the city of a hundred spires. The question is which one to climb if you want to get beautiful views? Simple answer is: any. However, some of them might be overcrowded, too expensive or even closed to the public. A safe choice is the highest tower of St. Vitus Cathedral because the views are stunning, price fair (less than 10 dollars as of January 2022) and if you get in early (it opens at 10am), you can avoid the queue.

A free option would be Vitkov Hill in Zizkov district. The hill is decorated by one of the biggest horse statues in the world. Historically, it was a place of an epic clash between the pope, his crusader army and so-called Hussite warriors who defended Prague.

The Czech capital is also a great cradle of culture. And for a reason. It’s home to countless music venues as well as theaters which are definitely worth a visit. Even though the city had its own affair with Mozart, small and underground theaters are equally, if not more, entertaining.

Czech people have a hilarious dry sense of humor which is well reflected in plays of the world-renowned Jara Cimrman.  Luckily, his plays have been recently translated into English and thus made accessible to foreign visitors. There is high demand for the tickets, so make sure to plan ahead and buy them online. Another great option is a modern venue that offers visual and rather circus-like production called Jatka78 located in Holesovice district.

Insider tip: to avoid tourist traps, do not enter places labeled as “Traditional Czech Restaurant”. Luckily, Prague has many great foodie spots that serve both typical and high-quality food. One such restaurant is literally called Lokal.

As the name suggests it targets local customers, however, foreigners have recently started going there in generous numbers. In fact, there are several “Lokals” based around Prague, but probably the most popular is “Lokal U Bile Kuzelky” near the Charles Bridge, because our famous Prague youtuber, the Honest Guide, likes to go there himself.

The good news is that the one called, “Lokal Hamburk” and located in Karlin District, is not as crowded. You can easily find it, just get off at Karlinske namesti, a couple of tram stops away from the city center. And what food to order?

A simple suggestion would be: soup of the day, carp fries and Czech biscuit called “coffin” with whipped cream on top.

But in case you feel a little adventurous and don’t mind going even further off the center, a great place popular among Prague residents is U Bansethu near Namesti Bratri Synku.

Their specialty is Czech-style duck that goes perfectly well with Pilsner Urquell beer. Locals sing praises about how well it is tapped, which is no little compliment considering the fact that Czechs are utterly spoiled by good beer.

A good way to intensify your experience and explore the area is to take a street food tour. There are several providers based in the city that give culinary advice to visitors because Prague’s food scene can be a little overwhelming.

The problem is that the kind of meals presented to foreigners as traditional are usually the likes of pork knee, goulash, and chimney cake. Yet they are just the tip of the iceberg, at best.

And then there is the real local food, but it requires a little diving beneath the surface. For visitors willing to take such a journey, there is Local Food Tour Prague.

Local Food Tour Prague started in 2017 and has already introduced hundreds of people from around the world to Czech cuisine. It focuses on the culinary past because the goal is to present Prague history through the simple concept of local dishes.

Freshly renovated and located in the main square in Prague, National Museum is a building hard to miss. But most visitors just look at it and never get inside, which is truly a shame. The museum displays exhibitions ranging from evolution, history, to precious minerals and many more.

A less-known museum alternative would be the house of a former actor Jan Werich located in Kampa Island near Charles bridge.

It was opened to the public just a few years ago and provides a peek into Czech culture from a very unique perspective. There is also a café on the ground floor which serves a surprising dessert named ‘Hedgehog in a Cage’.

Now back to high art. Prague classical music scene has a lot to offer, but there is a catch. On one hand, some concerts are organized solely for tourists, which often means higher price for less quality.

And then there are concerts for locals, which are usually great. But the question is how to find them? Here comes another insider tip: google FOK, which stands for Prague Symphony Orchestra. It plays venues around the city including various churches as well as beautiful Rudolfinum and Municipal House.

Take a look at their program and buy tickets online. Furthermore, Prague has fantastic Jazz venues as well. Specifically, Jazz Dock, located directly on the Vltava river, regularly showcases extraordinary musicians from around the world.

In case you are into off-the-beaten path places, this paragraph is for you. First on the list is Cross Club, accessible from Nadrazi Holesovice metro station. With its fascinating futuristic design, it houses a wide spectrum of genres, anything from electronic to live hard-core music.

Another time-tested indie place is called Café v Lese in Krymska street, however their events have been somewhat slowed down by the covid situation.

Finally, if I may express my humble opinion, one of the craziest things you can do in Prague is to attend a concert at Modra Vopice Club.

Even though the venue is respected among fans of heavy genres from all over the Czech Republic, it basically looks like a wooden pig shed. Have a cheap shot at a bar, listen to some brutally noisy band on the stage and congratulate yourself to be truly hard-core.

For example, use public transport because it’s fun, clean and reliable. Only one ticket will get you into the bus, tram as well as subway. Moreover, historic tram no. 41 operates during summertime weekends and holidays starting at 11am. You can buy the ticket, which costs 50 CZK, using your credit card directly on the tram.

The public transport company also provides a cable car that departs from the station ‘Ujezd’ and goes up to Petrin Hill near the replica of Parisian Eiffel Tower.

Prague also has really good bike lanes if you want to get more physical. Just follow the route along the Vltava river either direction.

Northern path can lead you all the way up to Dresden in Germany. The southern one goes down to Karlstejn Castle for example, which is located about 30km (18 miles) from Prague. Bike-Sharing apps like Rekola might be handy.

Speaking of Karlstejn you can also take a train there from the main train station, departing at least once an hour. The ride takes about 30 minutes and will get you close to a proper castle; if you know what I mean. Not just a bunch of palaces thrown together aka Prague Castle, no disrespect.

Set 30 km away from the city, Karlstejn was built by Charles IV., Bohemian king and Holy Roman Emperor, in 14th century.

He collected holy relics, that means bones of saints there and had a private chapel where he would pray. He simply needed a hideaway from his busy royal schedule.

The same man was very fond of wine and built vast vineyards when he became the ruler. Some of them are still scattered around, for example vineyards called Havlickovy sady in Prague Vinohrady district.

The above list contains not your-usual “go-to-charles-bridge-and see-the astronomical-clock” advice. Hopefully, you enjoyed it and now have more awareness about things to do in Prague.

It was aimed to give you a solid foundation in case you are planning your trip to the Czech capital. As you could see, there is great variety when it comes to theatres, music, food, places to visit and forms of transport all of which are waiting for you to explore!

BIO: Chris is a tour guide based in Prague, Czech Republic, specializing in the history of local food. He has worked in tourism since 2016 but is also a former rock drummer who played concerts across a number of European countries. While rocking he had a chance to try regional dishes and drinks from various corners of the old continent. That experience made him appreciate and further explore local cultures including the one he came from. You can find him at localfoodtourprague.com, on Facebook at LocalFoodTourPrague, or on Instagram at localfoodtourprague

This website uses cookies to improve your experience while you navigate through the website. Out of these, the cookies that are categorized as necessary are stored on your browser as they are essential for the working of basic functionalities of the website. We also use third-party cookies that help us analyze and understand how you use this website. These cookies will be stored in your browser only with your consent. You also have the option to opt-out of these cookies. But opting out of some of these cookies may affect your browsing experience.
Necessary Always Enabled
Necessary cookies are absolutely essential for the website to function properly. This category only includes cookies that ensures basic functionalities and security features of the website. These cookies do not store any personal information.
Functional
Functional cookies help to perform certain functionalities like sharing the content of the website on social media platforms, collect feedbacks, and other third-party features.
Performance
Performance cookies are used to understand and analyze the key performance indexes of the website which helps in delivering a better user experience for the visitors.
Analytics
Analytical cookies are used to understand how visitors interact with the website. These cookies help provide information on metrics the number of visitors, bounce rate, traffic source, etc.
Advertisement
Advertisement cookies are used to provide visitors with relevant ads and marketing campaigns. These cookies track visitors across websites and collect information to provide customized ads.
Others
Other uncategorized cookies are those that are being analyzed and have not been classified into a category as yet.
SAVE & ACCEPT
4 shares