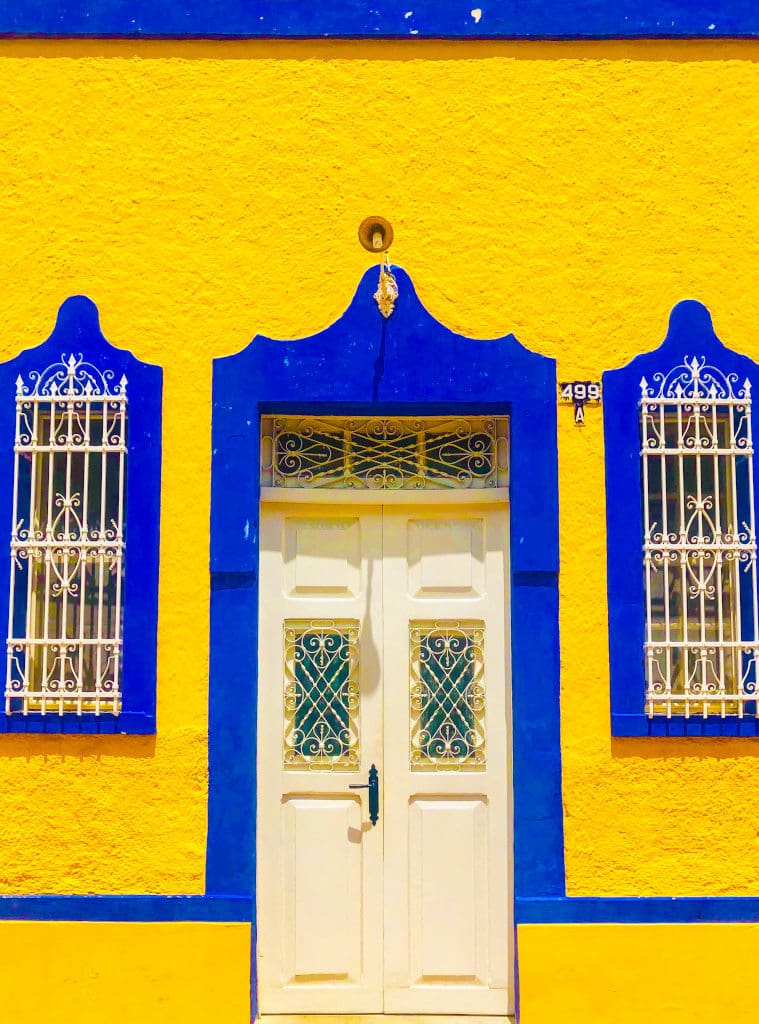 There’s nothing better to do in the Yucatan Peninsula than visiting Merida in Mexico. If you’re looking for the best things to do in Merida, Mexico, Shelley Marmor of Travel Mexico Solo has you covered.

Is Merida, Mexico, on your travel radar? This up-and-coming Yucatan Peninsula destination is growing in popularity each year.

With its proximity to some of Mexico’s biggest travel destinations, including Cancun, Tulum & Playa del Carmen, it’s no wonder more people want to include Merida in their Mexico travel planning.

Known for it’s well-preserved & colorful colonial architecture, Merida is beautiful right from the moment you arrive! However, it’s beauty extends even beyond the city limits into the surrounding Mayan ruins & picturesque cenotes.

As you might have already gathered, the cultural capital of Merida has so much to see & do! Let’s explore just 8 amazing options for your Merida, Mexico vacation.

✈️ TRAVELING TO MEXICO SOLO?
Check out “Mexico Solo Travel: How to be Safe & Crush It”

Paseo de Montejo, which loosely translates to Montejo Walkway, is easily Merida’s most beautiful street. The paseo is about 13 city blocks long (2 miles/3.2km), with numerous beautiful buildings, cute cafes & chic shops along the way. It is worth spending a few hours leisurely walking the whole thing!

This tree-lined street runs north-south, and essentially, you can start at either side & walk to the other. The Monumento a la Patria (Monument to the Fatherland), the most photographed monument on the paseo, is located on the northern end. If you start there, you’d end at a small park called El Remate (The Auction) on the south side.

Unlike many monuments, you can go right up to the Monumento a la Patria to check out the details. On it you’ll find more than 300 hand-carved figures, chronicling about 600 years of Mexico’s history — from the establishment of Tenochtitlán (present day Mexico City) in 1325, through the 1950s.

In addition to this gorgeous monument, be on the lookout for Paseo de Montejo’s other famous landmark, Museo Palacio Canton (Palacio Canton Museum). This museum is the biggest, most iconic & most photographed of the paseo European-style buildings.

If you have the time, check out the inside also. There’s lots of cool Mayan artifacts & the interior itself is a picturesque work of art.

No trip to the Yucatan Peninsula is complete without visiting at least one of the region’s Mayan archeological sites! The most famous, and one of the Seven Wonders of the World, Chichen Itza, is located just 90-minutes from Merida.

If you prefer a slightly shorter trek, head to Uxmal, located about an hour from Merida. Uxmal, a UNESCO World Heritage Site, is the second-most important Mayan site in the Yucatan. The coolest part of opting for Uxmal over Chichen Itza? You can actually climb the pyramids!

Uxmal is located along the Puuc Route, home to several other archeological sites also featuring structures built in the Puuc architecture style. Besides Uxmal, don’t miss the other Puuc Route sites of Labna, Kabah, Sayil & Xlapak.

Get your camera ready! Merida’s historic downtown packs a photographic punch with buildings in every color of the rainbow, wild bougainvillea growing in abundance & amazing colonial architecture.

One of the best ways to experience it, is to simply stroll around with no agenda at all! A great place to start would be Plaza Grande (Main Square). Here, you’ll find the city’s main plaza, also known as the Zocalo, which is as old as the city itself!

Many of Merida’s beautiful, grand buildings are here in Plaza Grande, including Catedral de Mérida (Merida Cathedral). Built from 1561-1598, this is one of the oldest cathedrals in the entire Americas Continent, and the main church in Merida.

Located right next to the cathedral, the Pasaje a la Revolución (Revolution Passageway) features a rotating lineup of art installations from both Mexican and international artists. The Pasaje is FREE to walk through.

While this pretty building is lovely from the outside, do head inside if it’s open. Check out both floors to see the beautiful murals painted by Yucatecan artist Fernando Castro Pacheco, which chronicle the Yucatan Peninsula’s history. Bonus: FREE entry!

4. Swim in the Cenotes

Mexico’s cenotes (pronounced sen-no-tays) are essentially swimming holes that resulted from the collapse of the Yucatan’s native limestone bedrock to expose the crystal-clear, freshwater underneath.

The limestone around some cenotes has fully collapsed, essentially making them “above ground;” whereas “underground” cenotes are accessed by going into a cave! They are both amazing, in their own ways, and some of Mexico’s most beautiful natural treasures.

There are thousands of cenotes located throughout the entire Yucatan Peninsula, with many amazing options located 90 minutes or less from Merida. These include: Cenote X’batun, Cenote Yaal-Utzil, Cenote Ik Kil, Hacienda Mucuyche, the Homún Cenotes & Cenote Xlacah at the Dzibilchaltun Mayan ruins.

The Merida Tourism Office offers free, 1-hour, daily walking tours that will really help you get to know downtown. Guides are all bi- or multi-lingual, and do speak English.

Tours start at 9:30am, but try to show up by 9:15am. Meet your guide on the first floor of the Palacio Municipal (Municipal Palace), the pretty pink building on the west side of Plaza Grande.

Please Note: It is customary to tip as payment for these free city walking tours. You should consider tipping your guide $100-200 pesos (about $5-10/€4-7) per person.

Although Mexico is the Taco Capital of the World, they take a back seat in the Yucatan! In Merida, the local delicacy is cochinita pibil. Now don’t worry — You can eat it in a taco, but there’s a more authentic option as well!

🌮 HUNGRY FOR TACOS NOW?
Check out “50 of the Best Tacos in Mexico City + Free Map”

Traditionally slow-cooked in an underground oven called a pib, cochinita pibil gets its unique taste from achiote powder & naranja agria (sour orange). These flavors are both unique and local to the Yucatan.

Try your cochinita on a taco, or the more traditional panucho, which is a tortilla stuffed with refried black beans. Both cochinita pibil tacos & panuchos should be eaten topped with pickled red onions & (at least a little) habañero salsa!

Where should you eat these delicious Latin American foods? For a more authentic experience, head to one of Merida’s mercados (markets). Conveniently located between Paseo de Montejo & downtown Merida, the Mercado Santa Ana has plenty of food stalls to choose from.

If you want to sit down & have a relaxing meal, head to Merida’s famous La Chaya Maya in downtown. If the weather’s permitting, opt for a table in their beautiful courtyard! Feel like treating yourself? There’s nowhere better than dinner at Kuuk for Yucatecan fine dining.

Travel back in time to a Mexican hacienda! Popular from the late-1600s through the early-1900s, Mexico’s wealthy elite built & lived in lavish, sprawling haciendas, where they produced local products. In the Yucatan, the haciendas farmed henequen, an agave plant with a variety of uses, including making rope twine & fabric.

After the invention of synthetic fibers, the henequen industry collapsed and haciendas became too expensive to maintain. By 1940, many were abandoned and fell into ruin. However, some have been restored to their former glory in recent years and turned into five star hotels, complete with spa facilities & impeccably-landscaped grounds.

Hacienda Minsé & Hacienda Santa Cruz are both located about 30 minutes from downtown Merida, and exceptionally beautiful! The Hacienda Yaxcopoil is about an hour away, but worth the drive. It will give you a more complete glimpse into hacienda life from the 17th Century with its onsite museum & henequen harvesting mill.

🇲🇽 WANT TO VENTURE OFF THE BEATEN PATH?
Check out “Mexico Hidden Gems: The 5 You Need to Know About”

Located just outside of historic downtown, the Gran Museo del Mundo Maya (Great Museum of the Mayan World) is worth the short trip. This museum houses the largest collection of Mayan artifacts in all of Merida!

Museo Casa Montejo (Montejo House Museum) is as beautiful inside as outside. It’s facade is one of only a few examples of the “Plateresque” architectural style, rarely found anywhere outside of Europe. Inside, you’ll find a gallery with rotating exhibits.

The best part? Admission is FREE, so no reason not to check it out!

Beyond these suggestions, there’s so much more to see & do in beautiful, colorful Merida, Mexico. Do you have other suggestions that aren’t on this list?

About Shelley of Travel Mexico Solo

Shelley is a former Miami travel magazine editor who ditched the office for the world! After visiting Mexico City in 2018, she decided to stay in Mexico permanently. Shelley traveled solo to 14 states in Mexico, before deciding to live in Merida.

She created the Travel Mexico Solo blog & Dream To Destination podcast to inspire women who have always dreamt of Solo Travel & Mexico Travel, but haven’t (yet!) accomplished either goal. Find Shelley on Instagram, Facebook, Pinterest, and Twitter!

Other Posts to read about travel in North and South America

This website uses cookies to improve your experience while you navigate through the website. Out of these, the cookies that are categorized as necessary are stored on your browser as they are essential for the working of basic functionalities of the website. We also use third-party cookies that help us analyze and understand how you use this website. These cookies will be stored in your browser only with your consent. You also have the option to opt-out of these cookies. But opting out of some of these cookies may affect your browsing experience.
Necessary Always Enabled
Necessary cookies are absolutely essential for the website to function properly. This category only includes cookies that ensures basic functionalities and security features of the website. These cookies do not store any personal information.
Functional
Functional cookies help to perform certain functionalities like sharing the content of the website on social media platforms, collect feedbacks, and other third-party features.
Performance
Performance cookies are used to understand and analyze the key performance indexes of the website which helps in delivering a better user experience for the visitors.
Analytics
Analytical cookies are used to understand how visitors interact with the website. These cookies help provide information on metrics the number of visitors, bounce rate, traffic source, etc.
Advertisement
Advertisement cookies are used to provide visitors with relevant ads and marketing campaigns. These cookies track visitors across websites and collect information to provide customized ads.
Others
Other uncategorized cookies are those that are being analyzed and have not been classified into a category as yet.
SAVE & ACCEPT
90 Shares
Share21
Pin61
Tweet8
WhatsApp
Telegram
Email