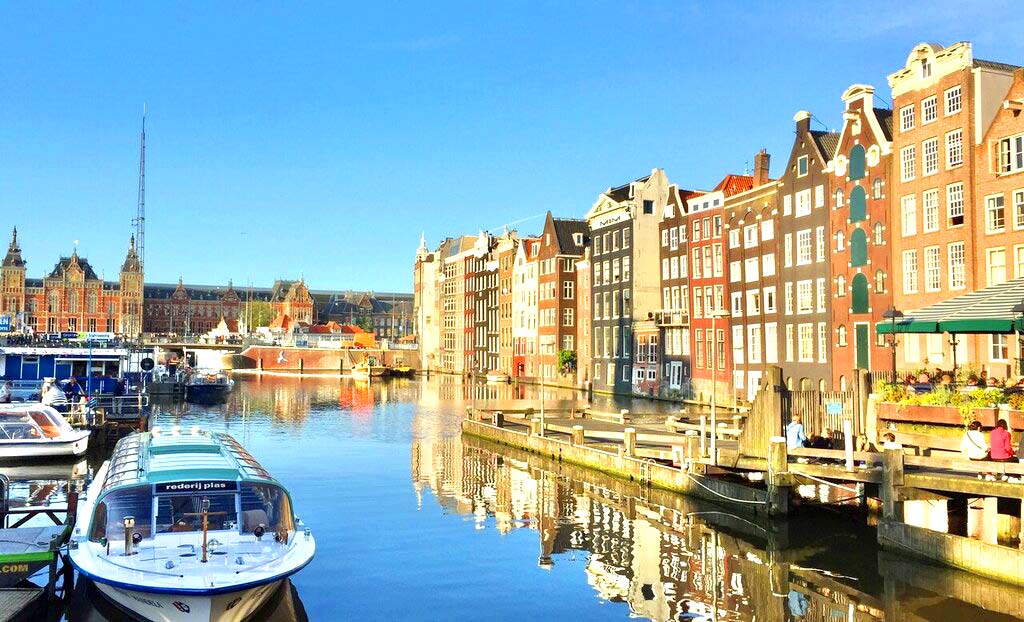 By far the most popular and best thing to do in Amsterdam while on an ultimate 7-day Netherlands trip is to just walk around and take in the sights and sounds of the Dutch capital city. You can hit all the main sites below in a day walking along the canals. Some of the most beautiful streets to be sure to check out are Prinsengracht and Singel. But really any street you walk down will be stunning.

The best photo ops will be from one of the city’s 1200+ bridges. Find a pink bike chained to the railing and you’ll have that quintessential Amsterdam photo to show your friends.

Perhaps the most important historical site in the city is the Anne Frank House. The story of Anne and the Frank family is known to nearly everyone thanks to Anne’s meticulous diary entries. The family home on Prinsengracht is the actual house that the family hid out from the Nazis in. Today it’s a museum that you can visit, so long as you have a ticket booked in advance. The house is not large and entry is strictly controlled so be sure to book well in advance, especially if you’re on a short trip to Amsterdam.

Dam Square is the main central plaza for the city. Here you’ll find the King’s Palace, the Nieuwe Kerk (New Church), and the Bijenkorf, a famous department store in a gorgeous building. The square is also flanked with some hokie things like Madame Tussauds and Ripley’s Believe it or not. But if you can look past that it’s a great spot to stop and rest your legs for a few minutes.

The King’s Palace is exactly what it sounds like. Basically the Dutch answer to Buckingham Palace, just not quite as grand. You can tour the palace for 12.50 euros. The Nieuwe Kerk is a large cathedral that is currently used for holding exhibitions. It doesn’t serve as a church anymore but is more like a museum with rotating exhibits. It’s not exactly new either. Though by European standards the 1500s can be quite “new”.

Nowhere else in the world will you find as many women in windows selling sex to giddy tourists. Just make sure not to take any photos of them. You can take photos of overall canal and street views, but don’t focus on a particular window or you will get told off. The Red Light District is active all day long, but really comes alive after dark. So be sure to visit at night.

One of the most popular things to do in Amsterdam is to take a 60 or 90-minute cruise around the canals. These tours are constantly running and leave from right in front of the central train station. Advanced booking is not necessary but recommended and you’ll usually get a slight discount for booking online.

The boats are small and you usually don’t get any food or beverage, but some of the more expensive private cruises include food.

There is also not a live tour guide, just an audio guide to listen along to. But because of all this the tours are still pretty cheap, starting at about 16 euros per person. On the cruise you’ll learn all about why Dutch Houses are so tall and narrow and a little more about the history of the city.

6. BETTER YET, RENT YOUR OWN BOAT

While cruising the canals on a canal tour can be nice, nothing beats a private boat ride through the city. There are a ton of companies that rent out boats, like Canal Motor Boats.

You can usually get one from about 50 euros per hour, depending on size of the boat and whether it’s self-drive or comes with a skipper. So if you want to set your own pace, rent a boat, grab a few cases of Heineken and have yourself a fun afternoon on the canals. If you’re driving yourself though just make sure someone is staying sober. Drinking and driving applies to boats too!

If you’d rather have the drinks provided for too, take a booze cruise with pizza and drinks!

7. VISIT THE MUSEUMS AT MUSEUMPLEIN

Amsterdam has a ton of top-notch museums. Most of them can be found in the south side of the city at Museumplein (museum square).

If you’re into Dutch painters you’ll also want to check out Rembrandthuis (15 EUR, not in Museumplein). It’s in the actual house the 17th-century painter lived in.

8. EXPLORE ONE OF AMSTERDAM’S BEAUTIFUL PARKS

Amsterdam has some beautiful green spaces. If it’s a nice day add a stroll through Vondelpark onto your walking tour of Amsterdam. It’s right behind Museumplein and features numerous walking trails. If you have more time, head to Westerpark and have a beer at Brouwerij Troost after your walk.

9. STOP BY A COFFEE SHOP

There are hundreds of coffee shops – which you’ve figured out by now do not sell coffee – scattered around the city. The further you get outside of the city center the better the prices will be and the quieter it will be for you to smoke your joint in peace.

If you’re looking for real coffee though here’s a list of the best coffee shops in the world.

If you’re a beer drinker, skip the Heineken Experience and taste local beers at one of the many craft breweries in Amsterdam. Your taste buds will be pleased with the flavors of the Amsterdam craft brewing scene. Some of the top breweries to check out are Brouwerij ‘t IJ, Brouwerij De Prael, Brouwerij Troost, and Oedipus Brewing. While you’re at it, have some traditional Dutch food too.

More and more tourists are flocking to the north side of the IJ River. Hop and the ferry (it’s free) over to the north side of Amsterdam and see what it’s all about. Some of the main stops in Amsterdam Noord are the A’DAM lookout (good view of the city from the top), the Eye Film Museum (museum dedicated to film) and the NSDM Wharf (funky old industrial building that’s been turned into a sort-of art market/gallery).

Dutch pancakes are like a mix between American pancakes and crepes. They can be savory pancakes or sweet pancakes and are enjoyed at any time of the day, not just for breakfast. For the best pancakes go to a specific pancake restaurant like Restaurant De Carrousel or hop on the Pannenkoekenboot (pancake boat). . Or better yet, visit a Dutch local in her home to learn how to make Dutch pancakes.

13. RENT A BIKE AND BE ONE WITH THE LOCALS

There’s no better way to pretend you’re Dutch than renting a bike to tour Amsterdam. You can do the entire walking tour above on a bike in half the time. There are a ton of bike rental agencies in Amsterdam. Check out the Iamsterdam website for more info on bike rental companies. As you cruise the bike paths, just be sure to pay attention to the traffic signals. The Dutch bike path system is state-of-the-art and you’ll be cycling on special paths.

Amsterdam is known for its house music scene and the city is home to numerous dance festivals. From Amsterdam Dance Event to small half-day gatherings, you can get a taste of the Netherland’s most popular music all year round (though most festivals occur in summer). Book your ticket in advance and get your groove on.

Amsterdam is home to one of the best football teams in the world, the Ajax Football Club. While the Dutch Erdedivisie is not one of the top football leagues, Ajax consistently performs well in the Champions League, having won it in 1994 and 1995, and made the semifinals in 2019. If your visit to Amsterdam overlaps with a home game, going to a game at Johan Cruyff Arena can be a real treat.

You probably don’t think of beaches when you think “Amsterdam”; but the city is not far from the long sandy beaches of the North Sea. While it’s not exactly the Cote d Ivoire, the Dutch beaches are unique in their own way. Lined with endless bars and restaurants, the beaches come alive on summer weekends. If you want to mix things up, head to the beach for dinner and watch the sunset from a trendy beach bar in Zandvoort aan Zee.

About Chris Of Around The World With Me

I’m Chris from Washington DC. Together with my wife, Nimarta, I have lived on three different continents and explored as much of this world as I can fit into my daily life. We both work office day jobs – I work as a structural engineer designing US embassies overseas and Nimarta for a nonprofit in DC – but have an unsatiated desire to travel and explore new destinations. I’ve been to over 60 countries and nearly all the US states but still have many more to discover and many to return to.

Growing up I never really ventured far from home. My parents took me to resorts in the Caribbean throughout childhood, but that was as adventurous as we got. Even through my college days I had still never been out of Eastern Standard Time. It wasn’t until I was living in Austin, TX and drove with a friend to Seattle, WA that I discovered that I was missing out on what the US had to offer, let alone the rest of the world. I had never even seen a mountain before, and now I was staring at the Grand Canyon and driving through red rock desert in Utah. From that moment I knew that I was destined to travel and see everything that I could.

Since finishing my undergrad degree I’ve lived in Austin TX, Las Vegas NV, Washington DC, Wellington (New Zealand), Groningen (Netherlands), and Amsterdam (Netherlands). Living in such a variety of locations has given me a unique chance to do some in-depth exploration of the US, New Zealand / Australia, and Europe.

This website uses cookies to improve your experience while you navigate through the website. Out of these, the cookies that are categorized as necessary are stored on your browser as they are essential for the working of basic functionalities of the website. We also use third-party cookies that help us analyze and understand how you use this website. These cookies will be stored in your browser only with your consent. You also have the option to opt-out of these cookies. But opting out of some of these cookies may affect your browsing experience.
Necessary Always Enabled
Necessary cookies are absolutely essential for the website to function properly. This category only includes cookies that ensures basic functionalities and security features of the website. These cookies do not store any personal information.
Functional
Functional cookies help to perform certain functionalities like sharing the content of the website on social media platforms, collect feedbacks, and other third-party features.
Performance
Performance cookies are used to understand and analyze the key performance indexes of the website which helps in delivering a better user experience for the visitors.
Analytics
Analytical cookies are used to understand how visitors interact with the website. These cookies help provide information on metrics the number of visitors, bounce rate, traffic source, etc.
Advertisement
Advertisement cookies are used to provide visitors with relevant ads and marketing campaigns. These cookies track visitors across websites and collect information to provide customized ads.
Others
Other uncategorized cookies are those that are being analyzed and have not been classified into a category as yet.
SAVE & ACCEPT
8 shares