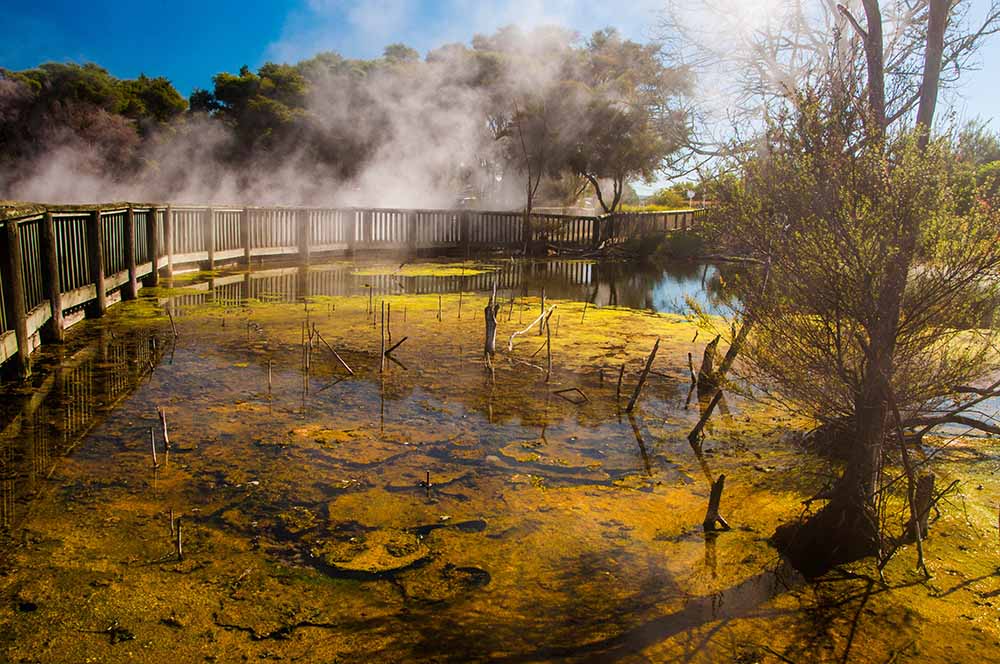 Welcome to Rotovegas! There is so extensively much to do in Rotorua, that it more than deserves this nickname. Unlike its name-giver, though, there are no casinos and hardly anything artificial to be found. On the opposite, Rotorua is most famous for its natural wonders.

Rotorua sits on the so-called volcanic zone. The earth crust in the area is so thin that boiling hot water, mud and sulfur reach the surface, turning Rotorua into this prehistoric landscape where it steams out of the ground and smells of rotten eggs. It doesn’t sound very inviting, I know, but that’s just a few of the many things you can do here.

Kuirau Park is the local city park and probably the only one of its kind in the world. It has a lake, it has trees, it has picnic benches, like any other park. But it also has boiling mud holes, acidic ponds and little thermal hot pools where you can soak your feet in (clearly marked so that there are no misunderstandings). Highlight of the park is a little lake that changes colors every time we visit. Walking through the park is free and is a great introduction to the other, bigger parks, or a way to see geothermal activity on a budget.

There are a lot of parks that show how Maori life is and used to be, like Mitai and Whakarewarewa. Those are popular villages to learn about Maori culture. It usually includes a show and a hangi, a meal made in an earth-oven.

If you like to see how some Maori live in Rotorua, without the tourists and the shows, stroll through the village of Ohinemutu. You can make it a loop from the city to Kuirau Park and back via this village.

People live here in the middle of geothermal activity. Houses are built in between hissing steam and bubbling mudd.
A little out of the way on more stable ground, there’s a beautiful marae. Unfortunately, visitors can’t go inside unless invited, but is also impressive from outside.

Waiotapu is one of many geothermal parks in Rotorua. But it’s the most famous of them, and that’s thanks to its fantastic colors. Even before Instagram was Champagne Pool the most photographed geothermal pool. It’s deep and filled with hot water, blows little bubbles and has this bright orange rim. It overflows into the Artist’s Palette, that boasts with yellow, green and blue patches. But also the rest of the park is worth seeing and being still under “construction” by nature, the park keeps ever changing its landscape. If you’ve never witnessed the eruption of a geyser before, make sure to be at the park before 9.30am because every day at 10.15am Lady Knox geyser erupts (with the help of a little bit of soap)

On the way from Rotorua to Waiotapu, you’ll find Kerosene Creek. It’s not such a secret tip anymore by now, but worth visiting nonetheless. It’s a picturesque stream, leading to a little waterfall. What’s special about it, though, is that it’s all HOT water. It’s not often you get to sit in a hot water river, jumping into a pool underneath the waterfall that feels warm like a massive bathtub.

Since the spot has become popular, I suggest you try and get there early in the morning, maybe before visiting Waiotapu. That way you’re more likely to have the waterfall to yourself.

About 15 minutes by car is lake Tarawera. A water taxi brings you from The Landing over the lake to Hot Water Beach (yes, there is also one in Rotorua, not just Coromandel). From there, the Tarawera trail takes you on a 15km walk back to The Landing. The walk itself is quite new, well paved and there’s no way you end up getting lost as long as you follow the path. It leads over the hills, which means there is a lot of up and down involved. After approximately an hour of walking, there’s a non-marked turn off which brings you to a peaceful hot spring. Perfect for a break or early lunch. Just don’t forget that you still have about 4 hours to walk!

On the rim of the town, there’s a big redwood forest. It’s really called Whakarewarewa but let’s be honest, no one can remember this name. Redwood forest was planted as a memory of the New Zealand soldiers who died in World War I and II.

The forest is divided into two parts. One part, a little closer to the city, is for walkers. There are several walking and hiking routes, going anywhere from 20 minutes to 6 hours.

The other side of the forest is reserved for bikers. A huge network of trails, from beginners to pros, is waiting for you, over 130 kilometers all in all.

And the best part is, both parts of the forest, biking and hiking, are completely free to use. If you need to hire a bike, there is a rental station at the entrance to the park, where you can also purchase a trail map if you like.

Have dinner at Eat Street

Eat Street is relatively new and it’s literally a street full of restaurants and the occasional bar, in the center of Rotorua. The street is covered so you get to eat outside if you wish, no matter the weather. You get to choose between italian, steak restaurants, thai, pub grub and much more. If you like to eat, this is the place to go!

Click to discover even more things to do in Rotorua or if you are  planning a trip to New Zealand.

How to get to Rotorua

From Auckland, it’s about a 3 hours’ drive down the line, which is highway 1. If you happen to go on the weekend I suggest you try to avoid the usual traffic hour out of Auckland as it can extend your driving time by at at least an hour.

There are also several buses per day that run between Auckland and Rotorua, operated by InterCity.

Alex from Discover Aotearoa – New Zealand from N to Z has inherited the travel gene from her parents. Her passion has always been travelling, it’s no surprise she’s worked in tourism for all of her professional life. After moving to New Zealand, Alex and her partner Chris explore as much as possible of her new home and share their discoveries on and off the beaten track with the world. You can also follow them onFacebook.

Other Posts About Travel in New Zealand and Australia

5 thoughts on “Top Things to do in Rotorua, New Zealand”