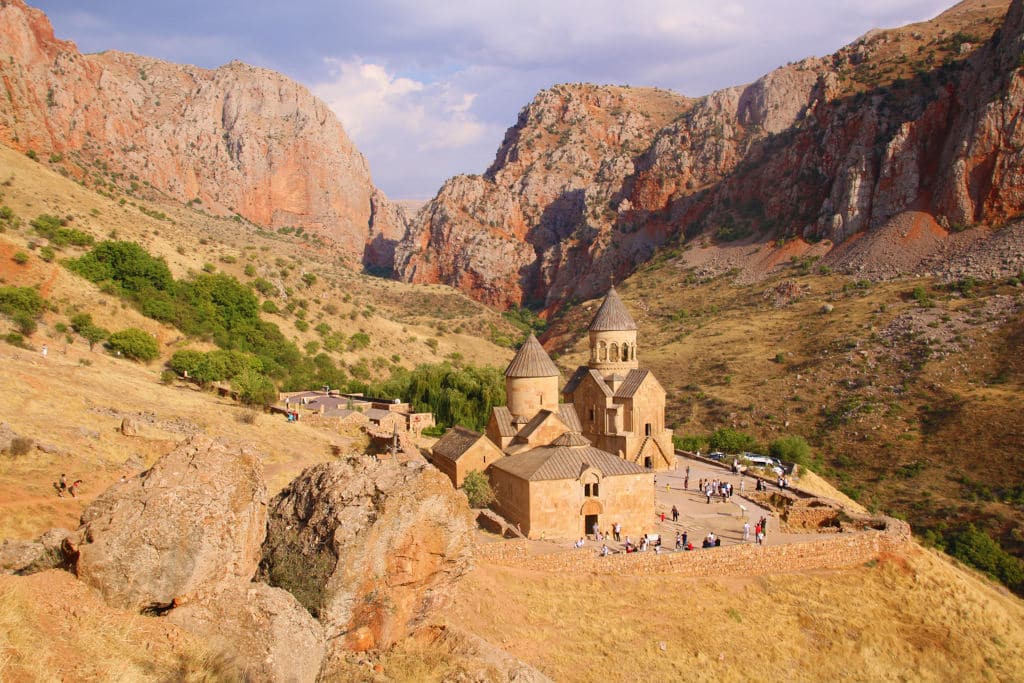 Yerevan feels like a city which both tourists and time have forgotten. There are very few travellers and the architecture gives the city a definite Soviet-feel, but that is partly what makes it such an interesting place to visit.

The capital is full of atmospheric restaurants and street cafes. There are not many must-see sights and the few which are can easily be seen in a day. However, this should not put you off visiting. Since it is a small country most of the top tourist spots in Armenia can be visited on day trips from Yerevan. The trips to make sure you add to your Armenia itinerary are Garni and Geghard monastery, Noravank monastery, Khor Virap monastery, and a visit to a vineyard.

Museums to Visit in Yerevan

1. Cascade complex and the Cafesjian Centre of the Arts

Tamanyan, the Soviet architect, had the idea of the Cascade complex back in the 1920s. He wanted to modernise Yerevan but I think he actually made it look more like it was part of the Soviet Union.

Work only started in the 1970s and there are different reasons given for why it stalled in the 1980s. Some say it was as a result of the earthquake in 1988, others indicate it was due to funding and the growing unrest across the countries which previously formed the USSR.

The second phase of the construction started in the early 2000s when the Armenian-American philanthropist Cafesjian funded the project. However, the work is still not quite finished. The last flight of steps to the column at the top have not yet been built. When we visited it did not look like it was going to be completed any time soon. But the views over the city and Mount Ararat makes it a worthwhile climb, even if you cannot get all the way to the top.

The Cafesjian Centre of Arts is located within the hillside. It is free to take the seven escalators up or down and there are numerous exhibits on either side. A ticket is required to enter the inner galleries of the art centre. In addition, each floor has a garden gallery which can be seen when walking the outdoor steps.

Inside the 22-metre-high squared pedestal beneath a statue of a woman holding a sword is the military museum. It was originally dedicated to World War II but today there is more of a focus on the Nagorno-Karabakh conflict with Azerbaijan in the late 1980s and early 90s.

Armenia has seen more than its fair share of invasions, massacres and repression and as a result the country has no border crossings with Turkey or Azerbaijan. To learn more about the genocide suffered under the Ottoman Empire from 1915 to 1922 visit the Armenian Genocide Memorial and Museum outside the city.

Be aware that staff often try to charge for entry but the museum is free. There is only a charge for taking photos.

3. Other Armenian museums to consider visiting are:

Built in 1926 Republic Square is the largest square in Yerevan. It is surrounded by purpose-built government buildings – in other words it’s a good example of communist architecture.

The main point of interest are the musical fountains which play between sunset and 10pm during the summer.

There is not much to see but Freedom Square has played an important role in Armenia’s modern history – both at the end of the Soviet Union and later for the many anti-government rallies. Together with Republic Square, this is where people come to protest.

I have not visited many cities with as many cafes and restaurants per capita as Yerevan.

The area around the Cascade Complex is the best place to go for a meal. In the summer the many cafes and restaurants either side of the landscaped gardens spill onto the sidewalk. Fairy lights decorate the trees and it is a cozy place to sit with a glass of wine watching people walk past.

Armenian food and wine were one of the most pleasant surprises on our trip. The cuisine is a mix between Mediterranean and Turkish with dishes made from high-quality local produce. You should not leave without trying the local wine. The best way to do this is on a day trip to one of the country’s many vineyards, as detailed below. Alternatively, in Yerevan, the most popular wine bar is In Vino. If you are more into beer try Dors Craft Beer & Kitchen or the Beer Academy.

The best day trips from Yerevan

Garni, Geghard and Khor Virap can be visited using a combination of public transport and taxi. No marshrutkas go all the way to Noravank, which is best to do as part of a group trip or using a rental car.

Group tours can be booked from your hotel or one of the many companies located around Republic Square. Most tours do not run every day so plan in advance.

This is the most popular day trip from Yerevan, partly because it is easy to do using a combination of public transport and taxi but also because Geghard monastery contains one of the most interesting churches in the country.

Monasteries are often in fantastic locations but bare inside. At Geghard monastery the rooms are carved into the rock face and are the attraction.

Garni is a Greek-style restored temple. There is not much to see except for the single building. It is also one of the very few sites which have an entrance fee. On the plus side it is on the way to Geghard monastery so the two sights can easily be combined.

Perched on a hill with Mount Ararat in the background, this is one of the best views in Armenia. The churches that make up this monastery are not that interesting, but make sure you walk up the small hill where the monastery is located for panoramic views towards Turkey and Mt Ararat.

Maybe it is because it is difficult to get to but Noravank monastery felt less touristy and more atmospheric than the other monasteries I visited in Armenia.

It appears high on a cliff edge as you drive up a narrow canyon. This is certainly one of those monasteries where the location and the detailed carvings on the outside of the buildings are the main draw.

There is no public transport all the way to the monastery and although in theory you could get a marshrutka and hitchhike, it is best visited on an organised tour or using a rental car.

Not many people know that the valleys in Armenia and Georgia were the first in the world to produce wine over 6,000 years ago. Wine making is mainly on a small scale but one vineyard that is open to visitors (by appointment only) is ArmAs, a one-hour drive from Yerevan.

There is no public transport and the drink driving limit is zero percent, so taxi is the only option unless you stay overnight. Or alternatively, try the wine bar in Yerevan detailed above – but don’t leave without trying some Armenian wine.

Author: Kristin from Adventures with Ensuite

Written by our guest blogger Kristin from Adventures with Ensuite. Kristin and her husband Ben love to travel in style to exotic destinations. Their blog focuses on off the beaten path destinations and they hope to inspire readers to try something new. You can also follow Kristin and Ben on Instagram, Facebook, and Pinterest.

Other Popular Posts About Travel in Europe and Asia

This website uses cookies to improve your experience while you navigate through the website. Out of these, the cookies that are categorized as necessary are stored on your browser as they are essential for the working of basic functionalities of the website. We also use third-party cookies that help us analyze and understand how you use this website. These cookies will be stored in your browser only with your consent. You also have the option to opt-out of these cookies. But opting out of some of these cookies may affect your browsing experience.
Necessary Always Enabled
Necessary cookies are absolutely essential for the website to function properly. This category only includes cookies that ensures basic functionalities and security features of the website. These cookies do not store any personal information.
Non-necessary
Any cookies that may not be particularly necessary for the website to function and is used specifically to collect user personal data via analytics, ads, other embedded contents are termed as non-necessary cookies. It is mandatory to procure user consent prior to running these cookies on your website.
SAVE & ACCEPT
77 Shares
Share32
Pin36
Tweet9
WhatsApp
Telegram