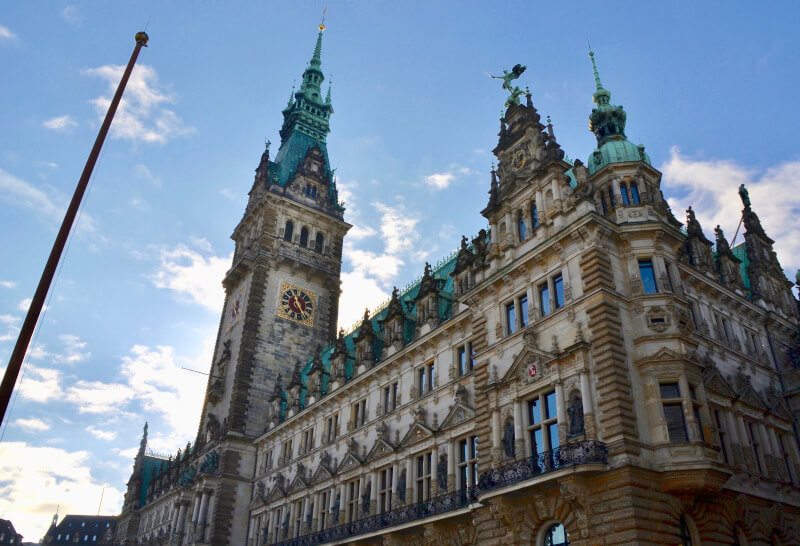 More often than not, trips to Germany skip Hamburg for Bavaria or the Rhine. But you’d be missing out by not visiting Germany’s second largest city because it is the country’s top cultural destination, a title it’s been given by The Tourism Department of Germany. So, here are 13 reasons why Hamburg should be on your Germany travel itinerary. Or rather, 13 things to do in Hamburg, Germany

If you thought the Beatles got their start in Liverpool, you would be incorrect. The band actually launched their career in Hamburg, playing around 273 shows in the city from 1960-1962. John Lennon even said once that “I might have been born in Liverpool, but I grew up in Hamburg.”

Make sure you visit the Beatles-Platz (Beatles Plaza), and you can retrace the Beatles’ footsteps by visiting the clubs where they played.

As Europe’s longest party street and a world-famous red-light district, the Reeperbahn has a notoriety that may or may not appeal to you. However, even if clubbing or partying isn’t your “scene”, the historical and cultural significance of this road means it shouldn’t be missed. It is one of the must-visit places in Europe.

Peak times for the bars, clubs, and discos on the Reeperbahn are from midnight until dawn. So, you can visit earlier in the day to experience the culture of the street without having to party (too hard).

Also called the St. Pauli Tunnel, the Elbe Tunnel runs underneath the Elbe River. It opened in 1911 and, at the time, was considered an architectural marvel. It still operates as a pedestrian and vehicle tunnel (though now for cars instead of horse-drawn carriages) that connects Central Hamburg with the docks and shipyards on the other side of the Elbe River. Giant lifts on both sides of the tunnel operate 24 hours a day to ferry cars, bikes, and pedestrians to and from the tunnel.

The walls in the tunnel are decorated with terra cotta ornaments showing animals or objects related to the Elbe River, and the tunnel is often a venue for exhibitions or running events.

A free walking tour of Hamburg’s Historic City Center is offered by Robin and the Tourguides. The Historic City Center Tour takes you to many of the city’s main attractions, such as the lighthouse project Elbphilharmonie (the city´s newest landmark as of this article’s posting), the WWII Memorial of St. Nikolai, and Little Venice. Your guide will walk and talk you through the 1200 year-old history of Hamburg from Charlemagne to the city’s bombardment in WWII to the present day.

This tour starts at 11:00 every morning and lasts approximately two hours.

As Hamburg’s most famous and recognizable church, St. Michael’s is a must-visit location. It’s considered one of the finest Hanseatic Protestant baroque churches in Europe. The interior of the church is stunning, but the views from the bell tower are the main reason why you’ll want to visit this landmark.

I think this observation deck is the best vantage point from which to see Hamburg, giving you 360 degree unobstructed views of the entire city, surrounding areas, and the harbor. Entry to the bell tower is 5 €, and it’s accessible by elevator and stairs. I recommend taking the elevator up and (if you’re able) taking the stairs down to see more of the interior of the church.

Every Sunday morning since 1703, the Hamburg Fish Market attracts thousands of visitors – some who’ve gotten up early and some who’ve stayed up all night. Here, you can find almost anything that’s available for purchase – seafood, fruit, flowers, clothing, souvenirs, etc..

But if you don’t need or want to buy anything, the Fischmarkt is still a must-do experience because next to the outdoor shops is the Fischauktionshalle (the Fish Auction Hall), which has live music, tables, food, and drinks.

Hamburg is called the “Venice of the North” because it has more bridges than any other city in the world (six times more than Venice). This aquatic city has the Alster Lakes, numerous waterways and canals running through the it, and three rivers – the Elbe, Alster, and Bille. So, there’s no shortage of water activities to do here – swimming, kayaking, sailing, etc. Ice skating on these waterways is even one of the most popular activities for locals and visitors during Winter.

But I found a river cruise to be the most fun water activity because it could serve as another tour of the city and harbor. Plus, Hamburg was meant to be seen from the water.

Hamburg had one of the largest Jewish communities in Germany until WWII when most of these community members were jailed, deported, or killed under the Nazi regime. Jewish life in Hamburg was almost completely erased. But today, Hamburg is part of the Stolpersteine Art Project to commemorate the victims of fascism all over Europe by placing commemorative cobblestones in front of their former homes.

Hamburg has over 5,000 of these commemorative cobblestones, called Stolpersteines, as a way to honor and remember the victims of Nazi oppression. Each stone was engraved and placed in front of a building with the name, date of birth, and date of death of the individual victim who once lived there.

The tradition goes: lovers would travel to a river and lock a padlock on a bridge’s railing to signify their engagement. Then the couple would throw the key away into the river where it would be lost to them forever, supposedly making their love last forever.

Germany, and Europe as a whole, have many love bridges, but they’re still fun and whimsical places to visit, regardless of whether you’ve been to one before or whether you’ve found love. In Hamburg, the bridge fortunate enough to be chosen as a lovers’ destination is the Schwanenwikbrücke Bridge.

The St. Pauli Neighborhood is known for being home to the Reeperbahn, but it’s also an eclectic art district and the location pf Hamburg’s “Chinatown.” St. Pauli is where the Beatles lived, and this area still has a great music scene. St. Pauli is known for its graffitied doors and buildings, counter-culture history, Landungsbrucken (the city’s floating dock), and the FC St. Pauli football club.

This neighborhood is perfect for just wandering through the side-streets, taking in the waterfront views, and eating a hardy meal in a pub cheering on a football team with complete strangers.

Also called the Hamburg Rathaus, or just the Rathaus, Hamburg City Hall is one of the most recognizable buildings in the city because of its eclectic mix of neo-Renaissance architecture. It’s the seat of the Parliament and Senate of Hamburg, and the current City Hall is the sixth iteration of this building – the first five were in different locations or destroyed by fires.

I’ve already touched on the Reeperbahn, harbor area, and St. Pauli as epicenters for Hamburg’s nightlife, but there are also less-crowded areas of the city where you can still have a great time after dark. There are floating bars and clubs on the rivers, Sternschanze and Karoviertel are more “trendy” alternatives to the Reeperbahn, and there’s almost always open-air concerts or music festivals happening in the city.

So, whether you’re looking to stay out all night in the underground or just want to have dinner at a rooftop restaurant, there’s a nightlife option for you. Culture Trip categorized many of the city’s iconic and lesser-known nightlife options here.

Deichstraße is one of the oldest streets in Hamburg, dating back to the early 1300’s. This street now contains carefully restored 17th, 18th, and 19th-century houses, along with all that is left of the old harbor district from before the Great Fire of 1842. The architecture here is more reminiscent of Dutch buildings than German ones, a testament to the city’s long and rich history of cultural exchange with other Northern European countries.

The Deichstraße street is lined on one side with restaurants and boutique stores and looks out over a canal on the other side.

I’m a travel blogger and photographer who’s traveled across parts of Central America, Asia, and Europe. Some of my favorite things are: tiramisu, my selfie stick (gotta take pictures of yourself if you want to be an influencer), white wine, and just barely getting my camera out in time to capture a sunset or an animal or a moment I want to remember forever. My goal is for my photographs, insights, and stories to inspire you to travel to places – old and new – that could be halfway around the world or just a walk away. Find me at my blog LucyonLocale or on Instagram at @lucyonlocale

Other Popular Posts About Travel in Europe

1 thought on “13 Things To Do In Hamburg, Germany”

This website uses cookies to improve your experience while you navigate through the website. Out of these, the cookies that are categorized as necessary are stored on your browser as they are essential for the working of basic functionalities of the website. We also use third-party cookies that help us analyze and understand how you use this website. These cookies will be stored in your browser only with your consent. You also have the option to opt-out of these cookies. But opting out of some of these cookies may affect your browsing experience.
Necessary Always Enabled
Necessary cookies are absolutely essential for the website to function properly. This category only includes cookies that ensures basic functionalities and security features of the website. These cookies do not store any personal information.
Non-necessary
Any cookies that may not be particularly necessary for the website to function and is used specifically to collect user personal data via analytics, ads, other embedded contents are termed as non-necessary cookies. It is mandatory to procure user consent prior to running these cookies on your website.
SAVE & ACCEPT
284 Shares
Share202
Pin82
Tweet
WhatsApp
Telegram