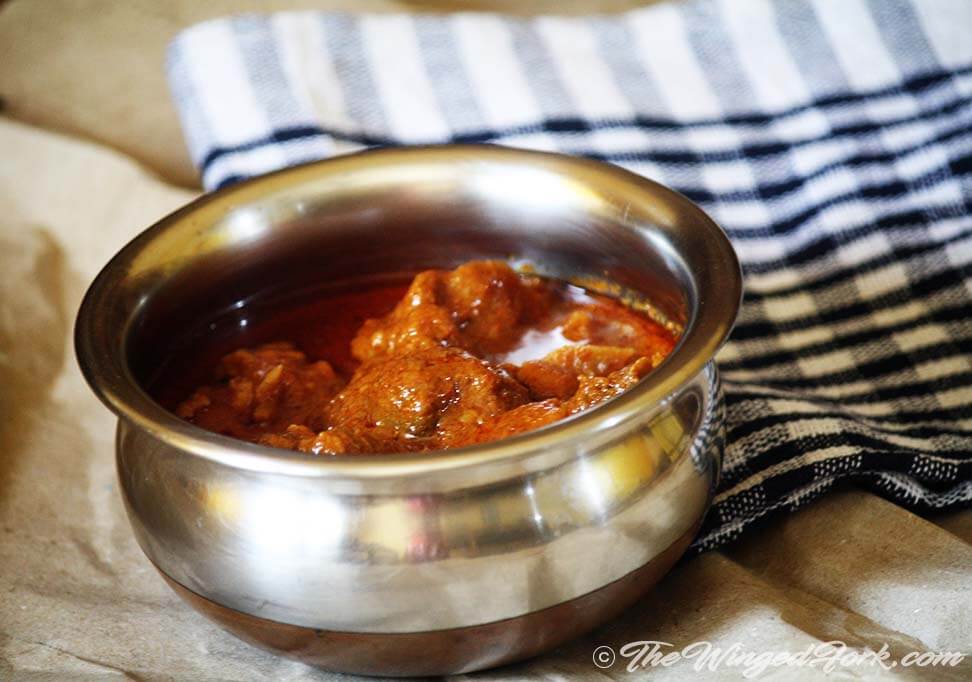 The traditional East Indian Port Vindaloo tastes as glorious as the East Indian pork sorpotel, or even more so!

The blend of chillies and other East Indian masalas makes your mouth water, literally! And it is served with as much pomp as the corned tongue or any other precious East Indian dish.

Want to try making the East Indian vindaloo on your own? It takes a bit of know-how and experience. So unless you have East Indian blood, it’ll take a few tries to get it right, but you will eventually.

Almost every East Indian family has their own version of the Pork Vindaloo recipe, but here’s the recipe we use at home.

What is the Pork Vindaloo recipe used by East Indians?

The East Indian pork vindaloo recipe is a derivative of the Portuguese Pork Vindaloo recipe that was called Carne de Vinha D’Alhos which means meat in a marinade of wine and garlic.

When the Portuguese were handed over Bombay as a gift in 1661, they influenced some of the traditions and culinary dishes of the local East Indians. Some of their dishes were also adopted and localized, this vindaloo being one of them.

The most important ingredients in the recipe are of course the pork, garlic, and a hearty dose of wine. Although it takes a tad of a learning curve, this traditional East Indian dish is not too difficult to make.

What ingredients do you put in a pork vindaloo?

Although, almost always, we tend to make at least 2 or 3 kgs of pork vindaloo at a time; since it’s your first try, let’s measure out the ingredients we use for a kg of pork meat instead.

How to make Pork vindaloo?

The trick to getting the best tasting vindaloo is using a mix of meaty pieces and fatty pieces. The fatty pieces are important components that add to the flavor of the dish.

Start by grinding all the ingredients to a fine paste with the about 50 ml of the vinegar. Apply the paste to the pork pieces and marinate overnight in a stainless steel, earthen or glass dish.

The next morning, add the rest of the vinegar and slow cook the pork on a medium flame till the meat and tushin or skin tender, stirring occasionally. If needed, add more salt or vinegar, but never water.

We usually cook the vindaloo for about an hour or so, before its ready to serve. After an hour, taste a piece and check if the tushin is soft enough to eat. If not, cook for another 15 minutes.

The dish can be stored at room temperature for a few days to a week. It does not spoil and tastes better with age.

Enjoy the spicy vindaloo with plain rice or soak it with some tasty bread such as pav.

If you want to try some other East Indian recipes, try some from this list!

Did you try making this recipe? Give us your review below! And make sure to share your delicious creations by tagging us on Instagram or join TheWingedFork Facebook group and share your lovely food pics and results of your food experiments there!