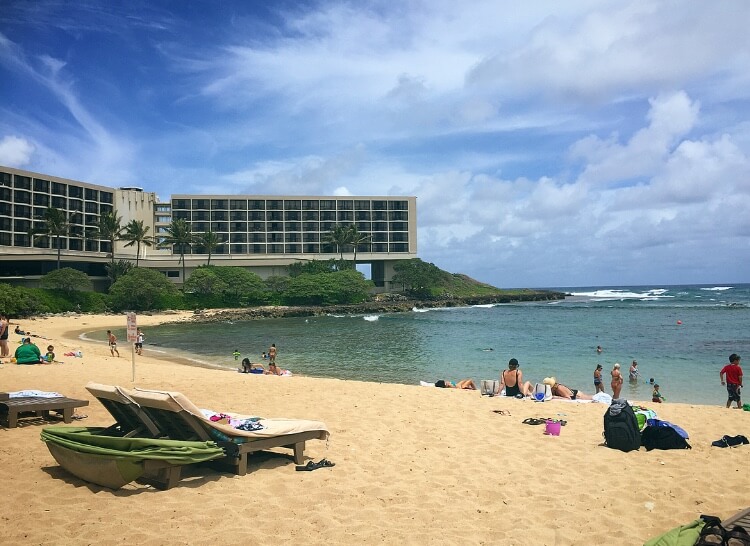 The North Shore of Oahu, Hawaii has found its middle ground as a place that both tourists and locals love.  The one winding road along this part of the island can lead you to so many different experiences, be it in Honolulu or the surrounding areas; if you know where to look.

When locals have a “staycation,” they go to Turtle Bay Resort.  I actually don’t know of many tourists who choose to stay at Turtle Bay.  It has a very different feel from the hotels in Waikiki or Ko Olina.  So lay out in the sun, snorkel for a bit, and just pretend to be a local being a tourist.

If you’re looking for the best places to stay in Oahu, read this post by my friend Nick.

Haleiwa has a very unique feel to it.  It’s a combination of island and Western, old and new.  Literally by just walking from store to store in this little town, you’ll come to realize that.

Watch the Surfers at Banzai Pipeline

Most people know the North Shore of Oahu as the place where all of the surfers go – and they’re not wrong.  The surfers at Banzai Pipeline shred waves that can be a couple dozen feet high.  If you’re lucky, maybe you’ll show up on the day that a surf competition is taking place.

Everyone knows about Lanikai Pillbox on the East side of Oahu, but, even as a local, I had only recently heard of Ehukai Pillbox.  I would describe this hike as relatively easy, due to the simple fact that I was able to complete it (I’m not the best hiker).  However, it does have quite a few steep steps to power through before reaching a wonderful view at the top.  And as an added bonus, odds are, there will be no people at the top of this hike with you. It is a must add to your Oahu itinerary.

Want another chance to let that little adrenaline junky out?  Waimea Bay is the place to do it.  This very safe experience basically entails you climbing a sizeable rock on the left shore of the bay, jumping off of it, and landing in the beautiful turquoise ocean.

I simply had to put a waterfall on my list of North Shore sights.  As basically the only legal waterfall on the North Shore, Waimea Falls made the cut.  Try to come a day after a bit of rain, so that way the falls will be even more powerful than usual.

Laniakea Beach is the place to do it.  I mean, where else are you going to see Hawaiian Green Sea Turtles (locally known as honu – click here for a few more local words you should know before visiting Hawaii) just sunbathing on the beach?

Devour a Dole Whip at the Dole Plantation

Dole whips will never get old.  I’ve been having this pineapple-y, creamy dessert since I was a little kid, and I’m still not tired of it.  I will say that a Dole Whip from the Dole Plantation is much better than any other Dole Whip I’ve had.  It’s definitely something you should add to your Hawaii Food Bucket List.

Bonus: for all you vegans out there, it’s vegan!

Extra bonus: I ate this for a solid eighteen years and had no idea it was vegan.

Kahuku Farms looks like this unassuming little roadside shop, but it’s actually so much more.  First of all, it has amazing acai bowls.  They grow their acai on island (most, if not all, other acai bowl places on island have the acai shipped in).  Second, you can buy all of the local fruits (or at least products containing the local fruits) that are pretty difficult to find.  Mango, papaya, lilikoi (passion fruit), apple bananas (they are significantly better than regular bananas), guavas – Kahuku Farms has it all.  Third, you can take a tour of Kahuku Farms to see where they grow all those fun fruits (granted, the tours are quite expensive, but there may be some discounts you can finesse)!

Want to see how many of these you can do in a day? I wrote a post on my blog, “A Guide to the Ultimate North Shore, Oahu Day Trip,” that explains exactly that!

Hello!  My name is Sarah, and I was born, raised, and currently live on the beautiful island of Oahu, Hawaii.  While I absolutely love to travel around the world, I also love sharing some of the local sites and adventures of the island.  I hope to try to encourage visitors to the islands to actually take part in some aspects of the beautiful local culture, rather than living in the artificial tourist bubble that can sometimes seem so tempting.  Follow more of my Hawaiian Island adventures on my blog, “Borders and Bucket Lists,” or on Instagram.

Other Posts About North and South America

This website uses cookies to improve your experience while you navigate through the website. Out of these, the cookies that are categorized as necessary are stored on your browser as they are essential for the working of basic functionalities of the website. We also use third-party cookies that help us analyze and understand how you use this website. These cookies will be stored in your browser only with your consent. You also have the option to opt-out of these cookies. But opting out of some of these cookies may affect your browsing experience.
Necessary Always Enabled
Necessary cookies are absolutely essential for the website to function properly. This category only includes cookies that ensures basic functionalities and security features of the website. These cookies do not store any personal information.
Functional
Functional cookies help to perform certain functionalities like sharing the content of the website on social media platforms, collect feedbacks, and other third-party features.
Performance
Performance cookies are used to understand and analyze the key performance indexes of the website which helps in delivering a better user experience for the visitors.
Analytics
Analytical cookies are used to understand how visitors interact with the website. These cookies help provide information on metrics the number of visitors, bounce rate, traffic source, etc.
Advertisement
Advertisement cookies are used to provide visitors with relevant ads and marketing campaigns. These cookies track visitors across websites and collect information to provide customized ads.
Others
Other uncategorized cookies are those that are being analyzed and have not been classified into a category as yet.
SAVE & ACCEPT
7 shares