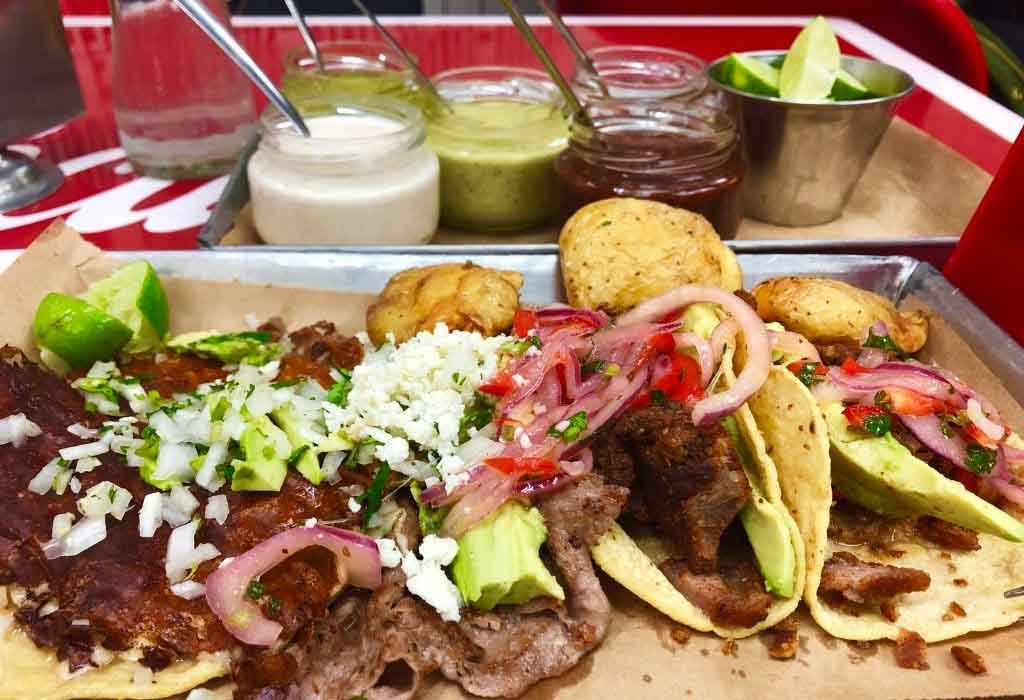 Traditional Yucatan food is different from what many know as Mexican food, though this is changing. Thanks to cities like Mérida, known as the Cultural Capital of the Yucatan Peninsula and the safest city in Mexico, this regional cuisine is gaining in popularity.

Chefs from Merida have been featured in Taco Chronicles and Chef’s Table: BBQ, two of the best food shows on Netflix. As the city grows in popularity, more and more people are visiting for not only all the amazing things to do in Merida — but to eat traditional Yucatan food as well.

While you can even try this cuisine throughout the Yucatan Peninsula, it’s not all created equal. Expect the food from cultural-focused cities like Merida and Campeche, a UNESCO World Heritage Site/City, to taste better than in touristic places like Cancun, Tulum and Riviera Maya.

Below, you’re going to learn about the ingredients that make up traditional Yucatecan cuisine. You’ll also discover five Yucatan food dishes you must try when visiting Merida, or any of the nearby colonial cities you can reach on a Merida day trip. Ready to get started? Let’s get to it!

Naranja argia (sour orange) grows all year in the Yucatan. It is the size of a medium orange, but tastes more citrusy like a lime. Sour oranges are used in many Yucatecan foods, including poc chuc (grilled pork) and cochinita pibil. Outside of the Yucatan, it is usually called Seville orange.

Pronounced ahh-she-oh-tay, axiote spice powder is made by crushing the seeds of the Bixa orellana shrub. This evergreen plant is native to Yucatan, and used in many traditional dishes — like cochinita pibil (slow-roasted suckling pig), among the most beloved Yucatan foods of all!

Axiote goes by other names, including annatto, achuete and roucou, but in Mexico it’s called axiote, an Aztec word. Its flavor is close to a red peppercorn, with some bitterness and a mild peppermint scent. Besides flavoring, it gives dishes like cochinita pibil their red color.

Recados are essentially mashed-up spice mixtures. An essential part of Yucatan food, you can buy them in local markets when you don’t feel like making your own. To make a recado, you grind down a specific mixture of spices, then add water or liquid to create a thick paste.

Recados are used as the base for most foods in Yucatan, and come in three colors. The colors include recado rojo (red), recado blanco (white), and recado negro (black); all used for different Yucatan food preparations and dishes.

All salsas in Mexico are hot, to some degree — because the point of salsa is adding the heat flavor to foods. Among the hottest peppers used in Mexico are habaneros, popular in Yucatan food. When dining, you’ll get a side of habanero salsa, to add as much (or as little) as you want.

5 Yucatan Food Dishes You Must Try in Mexico

The king of Yucatan food, cochinita pibil (coe-chee-neat-uh pee-bill), is essentially barbecue from Mexico. Check out Chef’s Table: BBQ on Netflix (Season 1, Episode 4) to see it prepared the traditional way by Chef Rosalia Chay in her remote Yucatan village of Yaxuna, Mexico.

Cochinita pibil is a marinated suckling pig that’s wrapped in banana leaves and slow-cooked underground in an oven called a pib — hence “pibil” in the dish’s name. You can try it inside tacos, panuchos and salbutes (we’ll get to those!), tortas (sandwiches), and more.

When served, you’ll be given some spicy habanero pepper salsa that you can add to your taste level, and pickled red onions. These are the two central condiments in Yucatan cuisine, so they are served alongside many dishes.

Poc chuc will come served with the typical condiments, habanero salsa and pickled red onion, but also some others. These other condiments include frijol con puerco, a rich-tasting Yucatan pork and beans dish, and chiltomate, a delicious charcoal-roasted tomato salsa. WayanE in Merida has some amazing poc chuc and tacos al pastor.

Sopa de lima (lime soup) is a favorite Yucatan food. It is a simple vegetable and chicken soup, but the naranja agria (the “lima” in sopa de lima) gives it a unique citrusy zing. While there are variations in how it’s served, many places top the soup with fried tortilla strips for some crunch.

In the Yucatan, you’ll find tacos in almost all restaurants and street food carts, but you can also change it up with the more traditional Yucatecan panuchos and salbutes. A salbute is a puffy fried tortilla, and a panucho is a tortilla that’s stuffed with refried black beans and then fried.

Panuchos and salbutes both come with the tortilla, your protein of choice, which can be anything from turkey to cochinita pibil, lettuce, tomato, and a side of pickled red onions and habanero salsa. They are great appetizers or snacks, or can be a full meal if you order enough.

By now you may be wondering if there are any Yucatan vegetarian foods. In all honesty, there aren’t all that many, but for vegetarians visiting Yucatan, you’ll definitely have to try the papadzules (pronounced pa-pawed-zool-es).

Papadzules are one of the ancient Mayan foods still eaten in Mexico and the Yucatan Peninsula today. This dish is made with enchiladas (cigar-style rolled tacos) that are filled with boiled egg and topped with two sauces, pepita, or pumpkin seed sauce, and a mild tomato salsa.

While all the other dishes listed are on the heavier side with pork as the main ingredient, papadzules taste light but very flavorful. For some Yucatan visitors, papadzules can be an acquired taste, but they are a locals’ favorite that you can find throughout the Yucatan.

The staple flavors in Yucatan food, like naranja agria and axiote, only grow in this part of Mexico, so even well-known foods like tacos will taste different in the Yucatan. For foodies, you can’t go wrong eating anywhere in Mexico, though Yucatan food has its own distinct flavors!

Which of these Yucatan foods are you most excited to try?

About Shelley from Travel to Merida

Shelley is a former Miami travel magazine editor who ditched the office for the world! After visiting half the states in Mexico, she settled down in the Yucatan city of Merida in 2019 — where she runs the site, Travel To Merida to help others plan their Merida, Mexico trip. Follow her on social at Facebook, Instagram, and Pinterest.

This website uses cookies to improve your experience while you navigate through the website. Out of these, the cookies that are categorized as necessary are stored on your browser as they are essential for the working of basic functionalities of the website. We also use third-party cookies that help us analyze and understand how you use this website. These cookies will be stored in your browser only with your consent. You also have the option to opt-out of these cookies. But opting out of some of these cookies may affect your browsing experience.
Necessary Always Enabled
Necessary cookies are absolutely essential for the website to function properly. This category only includes cookies that ensures basic functionalities and security features of the website. These cookies do not store any personal information.
Functional
Functional cookies help to perform certain functionalities like sharing the content of the website on social media platforms, collect feedbacks, and other third-party features.
Performance
Performance cookies are used to understand and analyze the key performance indexes of the website which helps in delivering a better user experience for the visitors.
Analytics
Analytical cookies are used to understand how visitors interact with the website. These cookies help provide information on metrics the number of visitors, bounce rate, traffic source, etc.
Advertisement
Advertisement cookies are used to provide visitors with relevant ads and marketing campaigns. These cookies track visitors across websites and collect information to provide customized ads.
Others
Other uncategorized cookies are those that are being analyzed and have not been classified into a category as yet.
SAVE & ACCEPT
45 shares