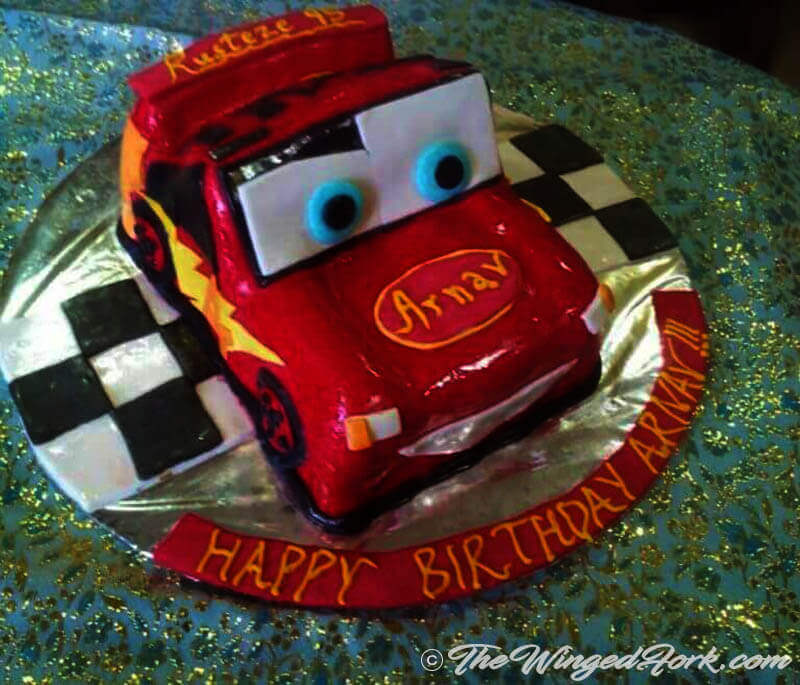 So we set out on her voyage to craft a one and a half kg Lightning McQueen cake with her trusty sidekick, me.

The tricky bit wasn’t just the outside, but the inside too. Arnav loves chocolate sponge. So Arnav’s mom Akshata asked for a checkerboard sponge on the inside with chocolate ganache.

We started out with three bright colored sponge cakes – blue, yellow and pink.

Now if I know anything about checkerboard cakes, it’s that they require time and precision, and are almost always round. So a rectangular checkerboard was interesting to work on.

I cut the sponge into long strips, most of them flat and some of them with a mound in the center. Then I created a finishing line base of fondant and started building the cake on it.

She worked on lathering the strips with a chocolate ganache to hold them together, while I worked on stealing away spoonfuls of ganache when she wasn’t looking. Good working together! The ganache was followed by a fine layer of cashew marzipan to mould the car. You’d think that ganache and fondant might not go together, but they actually taste amazing.

The marzipan layer was covered by a layer of red fondant. Yeah, I know the fondant pic looks like it came out of a Friday the 13th movie. That’s why sis had to have it on here, despite my voiced protests.

Anyways, post that I was put to work on creating doors, windows and eyes for Lightning McQueen. So I couldn’t take any pictures. Anyways, the final product did look pretty good! And I managed to take pictures from different angles before Arnav’s dad came over to pick it up.

The next couple of pics were sent across to us by Arnav’s mom Akshata. He looks really pleased with the cake.

She took this picture after they were halfway through the cake for dessert. Poor Lightning McQueen getting all gobbled up! We were told that the cake was as much fun to eat as it was to make! 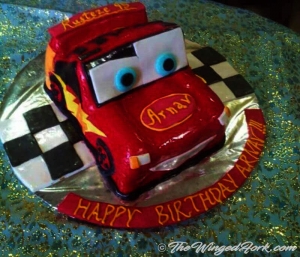 Sarah
A checkerboard sponge cake shaped in the form of Lightning McQueen.
5 out of 5 Stars by 2 readers!

Putting together the whole cake

Note that you will have leftover sponge cake and marzipan from this. You can always make minis of the rest or give the kids something to get creative with.

This website uses cookies to improve your experience while you navigate through the website. Out of these, the cookies that are categorized as necessary are stored on your browser as they are essential for the working of basic functionalities of the website. We also use third-party cookies that help us analyze and understand how you use this website. These cookies will be stored in your browser only with your consent. You also have the option to opt-out of these cookies. But opting out of some of these cookies may affect your browsing experience.
Necessary Always Enabled
Necessary cookies are absolutely essential for the website to function properly. This category only includes cookies that ensures basic functionalities and security features of the website. These cookies do not store any personal information.
Non-necessary
Any cookies that may not be particularly necessary for the website to function and is used specifically to collect user personal data via analytics, ads, other embedded contents are termed as non-necessary cookies. It is mandatory to procure user consent prior to running these cookies on your website.
SAVE & ACCEPT
104 Shares
Share2
Pin102
Tweet
WhatsApp
Yum
Telegram