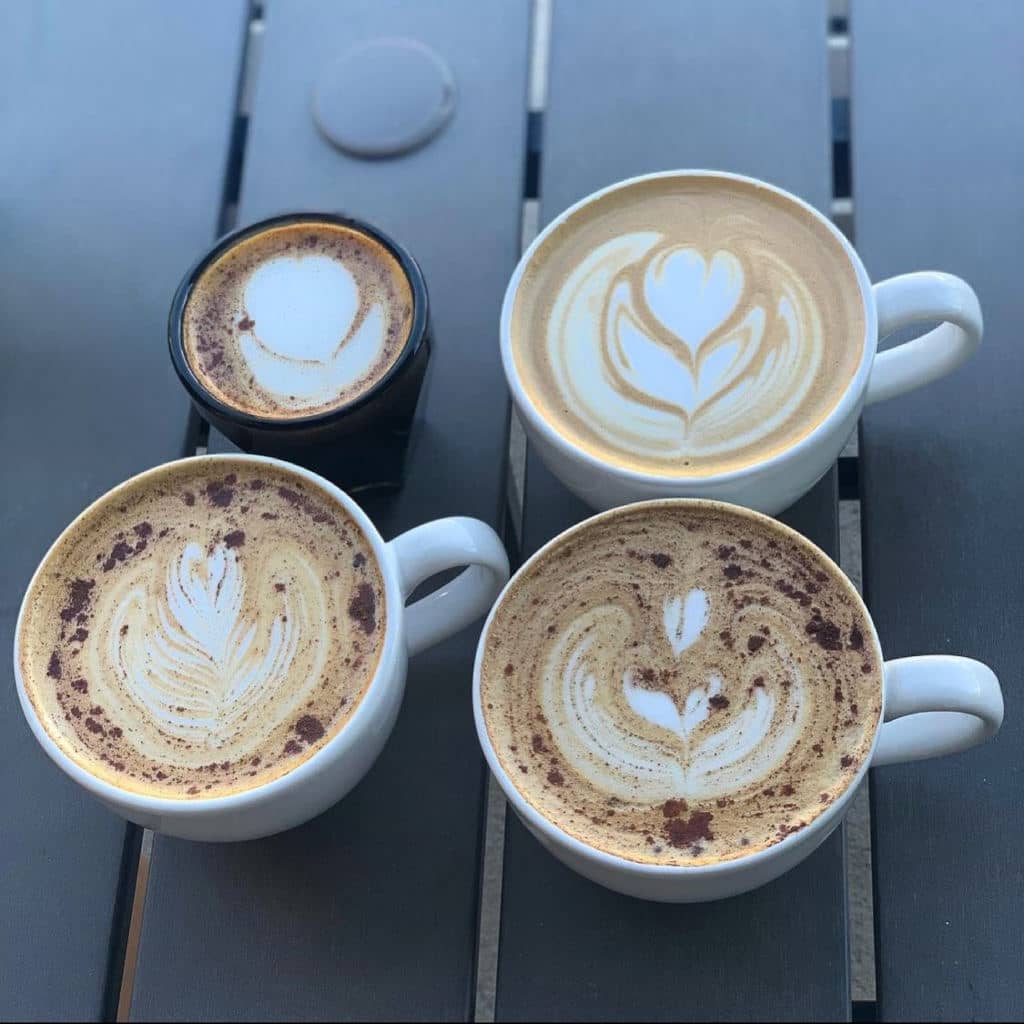 It’s difficult to discern the difference between these caffeinated beverages unless you’re a coffee enthusiast. There’s black coffee, milk coffee, hot coffee, and cold coffee. Apart from the essentials, most coffees are likely to be rather similar. After all, milk coffees are meant to contain milk in them, so what could be the difference between them?

So, what distinguishes a flat white from a latte?

Although both flat whites and lattes are espresso-based drinks with the same amount of espresso, a flat white is significantly smaller than a latte. A latte is roughly 240 milliliters and a flat white is about 160 milliliters in general, however, the exact amount varies by region and café. A flat white, on the other hand, isn’t just a smaller latte. There are a few distinctions between the two coffees, but the most significant one is the amount of milk used in each.

What is a flat white?

The flat white is reported to have started in Australia in the 1980s and subsequently spread to the United Kingdom. The New Zealand Herald, on the other hand, notes out that many coffee roasters in New Zealand claim Wellington, the country’s capital, as the birthplace of the modern-day flat white.

A flat white is an espresso-based drink containing one or two shots of espresso and a thin layer of steamed milk, regardless of where it originated. Microfoam is a thin or flat coating of steamed milk on top that has a velvetier texture than other milk-based coffees.

What is a latte?

Unlike the contentious origins of the flat white, the latte or cafe latte is commonly acknowledged to have originated in Italy. The drink, however, was not created with Italian coffee consumers in mind. The cafe latte is said to have become a popular drink among American tourists who are used to visit cafes in areas of Italy. Cafe lattes were created as a substitute for cappuccinos for American tourists who found the strength of Italian cappuccinos to be too much for them.

As a result, a latte is larger than both cappuccinos and flat whites, with a gentler coffee-to-milk ratio. A cafe latte in Italian is a very milky breakfast coffee with a shot of espresso poured from a stovetop espresso maker. A latte is normally made with a shot of espresso, steamed milk, and a layer of foamed milk on top outside of Italy. Because it contains more milk than espresso, the milk effectively hides the coffee’s acidic flavor. This, according to Coffee Bros, is why lattes are a great drink to add flavored syrups to.

How is milk used in each?

Both a flat white and a latte employ espresso as their source of caffeine, therefore the distinction between the two beverages rests in the milk. A flat white merely has a layer of microfoam on top of the espresso. A latte, on the other hand, is made with a larger amount of steamed milk and a layer of foamed milk on top.

Milk frothed with a steam wand has three layers: warm liquid at the bottom, firm froth with huge bubbles at the top, and dreamy microfoam in the center. The way the milk is poured into the drinks is another distinction between a latte and a flat white. When creating a latte, use a spoon to hold back the froth layers, pour in the warm milk, and top with only a teaspoon of the foam. You only want the silky microfoam in your espresso for a flat white.

How does each taste?

Because a flat white has a higher coffee-to-milk ratio than a latte, it’s a considerably stronger espresso drink — nearly like taking a shot of sharp espresso straight up.

While a flat white has all of the power and flavor of espresso, the added microfoam gives it a richer and creamier mouthfeel. In contrast to a latte, a flat white allows you to taste the flavor profile of the coffee beans used to prepare the espresso because it contains less milk.

Flat whites are popular among coffee drinkers who prefer an espresso-based beverage without the foamed milk. A latte, on the other hand, has twice as much milk as most other espresso-based coffees with milk, giving it a milky, mellow flavor.

Are the typical sizes different?

In general, though, both a latte and a flat white have the same amount of espresso; the proportion of milk differs. Despite the debate over cup sizes when it comes to a flat white vs. a latte, other aspects that distinguish the two coffees – the amount of milk used, and how it is made and poured are more important.

Born and raised in Houston, Brian began working for Cody & Aimee in 2007 at the young age of 18. Working his way up the ranks of their company, it was clear he had a gift for business and leadership. While maintaining a full-time management role, Brian obtained a BS in Business Administration from the University of Houston in 2012 and is a partner at the BlockHouse Coffee and Kitchen.

Brian enjoys living simply, surrounded by loving family, friends, food, and of course coffee. He also loves reading about business, leadership, and real estate, staying fit, and traveling to as many new places with his wife Marianne as he can. You can connect with Brian on Linkedin and Facebook.

2 thoughts on “Latte vs. Flat White – What’s The Difference?”

This website uses cookies to improve your experience while you navigate through the website. Out of these, the cookies that are categorized as necessary are stored on your browser as they are essential for the working of basic functionalities of the website. We also use third-party cookies that help us analyze and understand how you use this website. These cookies will be stored in your browser only with your consent. You also have the option to opt-out of these cookies. But opting out of some of these cookies may affect your browsing experience.
Necessary Always Enabled
Necessary cookies are absolutely essential for the website to function properly. This category only includes cookies that ensures basic functionalities and security features of the website. These cookies do not store any personal information.
Functional
Functional cookies help to perform certain functionalities like sharing the content of the website on social media platforms, collect feedbacks, and other third-party features.
Performance
Performance cookies are used to understand and analyze the key performance indexes of the website which helps in delivering a better user experience for the visitors.
Analytics
Analytical cookies are used to understand how visitors interact with the website. These cookies help provide information on metrics the number of visitors, bounce rate, traffic source, etc.
Advertisement
Advertisement cookies are used to provide visitors with relevant ads and marketing campaigns. These cookies track visitors across websites and collect information to provide customized ads.
Others
Other uncategorized cookies are those that are being analyzed and have not been classified into a category as yet.
SAVE & ACCEPT
13 shares