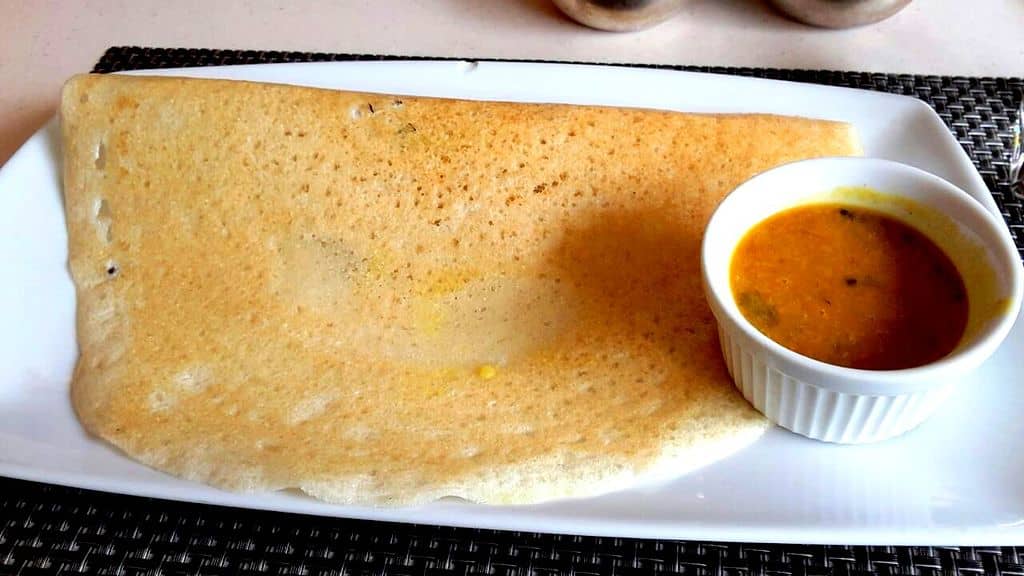 Originating in the southern part of India, Dosa is a tasty rice pancake that’s commonly eaten for breakfast. It gives the ideal kickstart to your day as it has the right amount of carbs and protein, minus the saturated fats and sugars. The Dosa is made of fermented rice and lentil batter and has the appearance of a thin crepe.

What is the origin of dosa? The history of this iconic dish is very interesting. Though it’s certain that the dish has it’s roots in south India but the exact place of birth of this dish is still under debate. According to the historian P. Thankappan Nair, the dosa came to us from the town of Udupi in Karnataka.

However, the food historian and nutritionist K. T. Achaya refutes this Udupi town origination story by claiming that according to ancient Cankan literature the dosa was already in use way back in the 1st century AD in the “ancient Tamil territory” which is present-day Tamil Nadu, Kerala, Puducherry, Lakshadweep island and southern parts of Andhra Pradesh and Karnataka.

But what strengthens the theory that the dosa originated in Udupi, Karnataka, was the fact that the recipe for this dish can be found in the 12th century Sanskrit text “Manasollasa”, compiled by the Chalukya ruler Someshvara III who ruled over a part of Karnataka. So the dosa became famous and an important part of the Tuluva Mangalorean Udupi cuisine of South India.

Earlier the dosa just used to be a thin, crispy pancake but as time progressed several variations of the dish came into being and many different fillings. So what is inside a dosa? The most popular among them are the Masala dosa (dosa with a potato filling), Rava dosa (made using semolina), Mysore Masala dosa (spicier Masala Dosa), Paneer dosa (dosa made with paneer which is an Indian version of feta cheese), Onion Rava Masala dosa, Cheese dosa, and Schezwan dosa.

The dosa is typically served hot and with accompaniments like coconut chutney, sambar, and different kinds of Indian pickles. They are a staple meal of the South Indians and over the years became a popular dish even in North India, with many Udupi restaurants and street food stalls opening up.

I personally love the dosa as it is light, tasty, easily digestible and healthy. It forms a wholesome and delicious combination with chutney and sambar. Because it is so easy to make and is packed with flavours, the dish is a winner across the board and a favourite of foodies throughout the country.

In Karnataka, the best dosa places are Siddapa hotel, R.K. Dosa Camp, and Vidyarthi Bhavan. Whereas in Hyderabad, Ram ki Bandi, House of Dosas, and Chutneys serve the best dosas. In Mumbai, you can eat the tastiest dosas in Cafe Madras, Anand Stall, and Thangabali. And the best dosa places in Delhi are Carnatic Cafe, Lakshmi Coffee House, and Anna ka Dosa.

Did you know that the Indian dosa is so popular in Thailand, that a number of places in Chiang Mai serve the dosa too? Go figure!

Bio of Vaibhav Mehta of The Wandering Vegetable

Vaibhav Mehta is an actor, travel-blogger, and personal growth writer from Hyderabad, India. He is a traveler who inspires people to explore the world in an offbeat and adventurous way. He took his first solo trip to Spain to break the monotony of working as an actor in a Bollywood musical in Dubai and has never looked back since. He’s constantly juggling life between ‘Lights, Camera, Action’ and ‘Let’s Go Somewhere’. Living by the mantra “Have Money, Will Travel”, he aims to explore every country on the planet and host a travel show in the future. You can find more of his inspiring travels and slice of life blogs at The Wandering Vegetable. You can also follow him on Instagram.

This website uses cookies to improve your experience while you navigate through the website. Out of these, the cookies that are categorized as necessary are stored on your browser as they are essential for the working of basic functionalities of the website. We also use third-party cookies that help us analyze and understand how you use this website. These cookies will be stored in your browser only with your consent. You also have the option to opt-out of these cookies. But opting out of some of these cookies may affect your browsing experience.
Necessary Always Enabled
Necessary cookies are absolutely essential for the website to function properly. This category only includes cookies that ensures basic functionalities and security features of the website. These cookies do not store any personal information.
Functional
Functional cookies help to perform certain functionalities like sharing the content of the website on social media platforms, collect feedbacks, and other third-party features.
Performance
Performance cookies are used to understand and analyze the key performance indexes of the website which helps in delivering a better user experience for the visitors.
Analytics
Analytical cookies are used to understand how visitors interact with the website. These cookies help provide information on metrics the number of visitors, bounce rate, traffic source, etc.
Advertisement
Advertisement cookies are used to provide visitors with relevant ads and marketing campaigns. These cookies track visitors across websites and collect information to provide customized ads.
Others
Other uncategorized cookies are those that are being analyzed and have not been classified into a category as yet.
SAVE & ACCEPT
6 shares