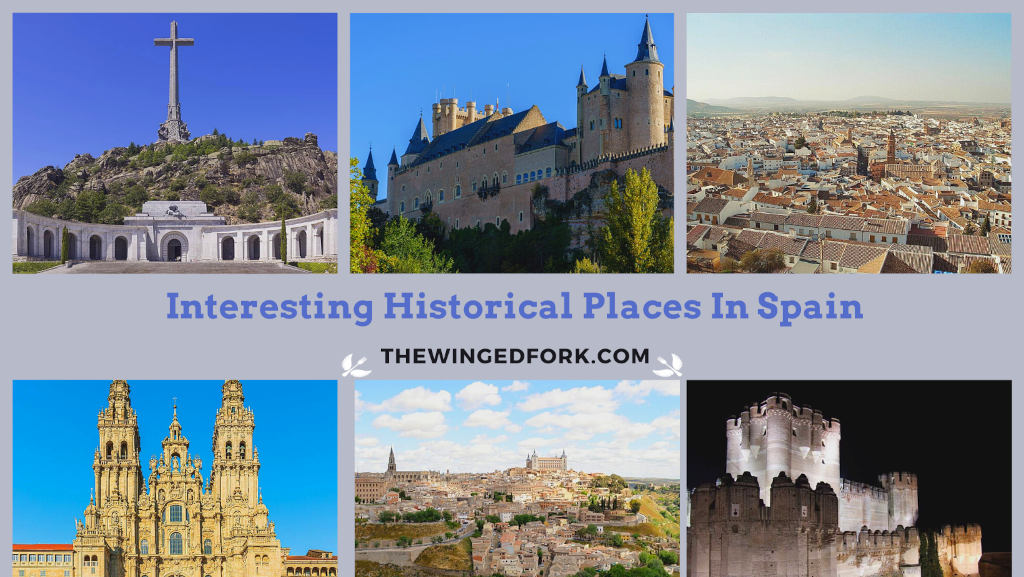 One of the best-known European countries among tourists, Spain is famous for its sunny beaches, crystal blue waters, and aesthetic architecture, attracting thousands of visitors annually.

Just a few famous landmarks in Spain that catch the attention of almost every tourist include the Alhambra Palace in Granada, the Mezquita of Cordoba, the Cathedral of Santa Maria of Palma de Mallorca, and El Escorial in Sierra de Guadarrama.

However, there is so much more history to discover and experience in Spain. In this article, we will take you through some of the interesting historical places in Spain you may have not heard of. Exploring these landmarks will give you a deeper insight into the history of Spain, but you will also be left amazed by the aesthetic beauty that these places hold.

1) Toledo, The City of Three Cultures

Located on the hilltop of Castle-La Macha, Toledo is one of the best-preserved historical cities, with its fortifications and medieval vibes still intact. The city was dubbed as “The City of Three Cultures” for its religious tolerance–Muslims, Christians, and Jews used to live in harmony with each other here. A plethora of cathedrals, synagogues, and mosques are scattered throughout the city, including Santa Maria La Blanca, one of the oldest standing synagogues in Europe. You can enjoy the religious traditions of the three prominent religions in the city, preserved in elaborate historical architecture.

In addition to the religious architecture, the city is also famous for the numerous shops displaying the delicate art of sword-making and armory, which has passed from generation to generation.

Built around 1060 AD, Santiago de Compostela Cathedral was built during the reign of King Alfonso VI and under the patronage of Bishop Diego Peláez. The cathedral was built to house the holy relics and belongings of St. James. The cathedral is a critical pilgrimage spot for the Christian community, with thousands of believers making a pilgrimage to these holy relics each year.

The cathedral not only finds its importance in the Christian community but is also a sight to witness for its Baroque architecture and impressive Romanesque facades. The triple doorway of the cathedral is considered one of the largest and most astounding pieces of Romanesque architecture globally. The cathedral’s exterior magnificence makes it worth a visit, but the detailed inner decoration of the church is also a sight not to be missed while you’re here.

Apart from being the highest mountain peak in Spain, El Teide is a centuries-old functioning volcano. Located in the Canary Islands, the volcano is believed to be 170,000 years old. Its former peak has collapsed into a comparatively narrow existing edifice. The place is also believed to be Europe’s top nature wonder which tourists can visit.

There are several possibilities to reach El Teide if you wish to visit this natural wonder in person. You can hike the mountain. It’s a lot easier than hiking the Torrent de Pareis. But driving to the top of the crater floor or riding a cable car to the top are also possible.

You certainly do not want to miss out on visiting the castle that inspired Walt Disney’s official logo. The Castle of Segovia is located between the enchanting Eresma and Clamores rivers. The fortress was originally built around the 12th century to add to the military defense of the state but was later converted into the royal palace for King Alfonso VIII.

This castle’s architecture is especially intriguing, with its Gothic architecture infused with some Romanesque inspirations. The protruding towers of the castle, in addition to its enchanting courtyards and a number of secret passageways, adds to the charm of the castle. Especially in winters, when the castle is covered with pristine snow, the castle’s beauty will leave you speechless.

A small city in Andalusia called Antequera is a hidden historical jewel in Spain, known for its ancient burial mounds. Hidden in southern Spain, Antequera is a hotspot for both man-made and natural archeological remains. Some of the prized remains in the city are the megalithic tombs of Mega, Viera, and El Romeral– believed to be some of the best-preserved tombs from the Bronze Age.

The Alcazaba of Antequera is another prominent landmark of the city, a Moorish fortress preserving the Islamic architectural traditions in the country. Make sure to take your time to visit this old town, and you will come across numerous viewpoints that stand as a remnant of past times.

Another lesser-known castle in Spain that you must visit is Castillo de Coca (Coca Castle), located in Segovia, Spain. Built in the 15th century, the castle is believed to be one of the famous Moorish Mudejar brickworks. The building is a classic fusion of Moorish and Gothic architecture, which adds to the unique architecture of the castle.

This rectangular-shaped castle is worth visiting if you happen to explore Segovia province. Taking a stroll through the castle’s hallways, with the original brickwork perfectly restored, will take you back in time to feel the magnificence and glory which the castle enjoyed in its heyday.

Located about 45 kilometers (28 miles) from Madrid city, San Lorenzo de El Escorial is a small town filled with Renaissance artwork and architecture. The town is also believed to be the vacation ground for Spain’s long-ago kings. The town spreads out as a massive complex containing monasteries, magnificent churches, mausoleums, libraries, and museums, all of which stand reflective of the reign of King Philip II.

The town has an astounding collection of courtyards, a royal palace, monasteries, and various other historical monuments which you can visit. Especially the royal palace, which is filled with period furnishings, tapestries, and fine artwork, is worth a visit in San Lorenzo de El Escorial.

8) Valley of the Fallen

The Valley of the Fallen is located in Sierra de Guadarrama and is one of the most controversial monuments in the country for its historical significance. Valley of the Fallen is a Catholic basilica that Diego Mendez built around the 20th century. The monument was built as a “national act of atonement” following the end of the civil war in the region. The basilica honors the casualties of the Spanish soldiers who died during the civil war. However, many believed the monument to be Franco’s shrine to victory instead of a commemorative memorial for the fallen soldiers in the war.

When you pass through Sierra de Guadarrama during your visit to Spanish landmarks, make sure to check this monument and make your own conclusion.

With the Valley of Fallen, we finish our list of some interesting historical places in Spain that you might not have heard of. Let us know in the comment section which of these unique places intrigued you the most.

About The Author: Elora Holt

I am a part-time personal assistant & part-time freelance writer/editor. Full-time architecture geek, especially Gothic & Art Nouveau varieties – the quickest way to convince me to travel is to describe the architecture of the local area (not that it will take much effort, I have a bucket list of locations that will take a lifetime). I’m a design geek as well, so my long-term focus is to work in 3D architectural rendering. But in the meantime, I’m enjoying grabbing a cup of coffee and writing about castles around Europe! For now, you’ll find me writing at Revisiting History and you can follow me on Medium at Elora H.