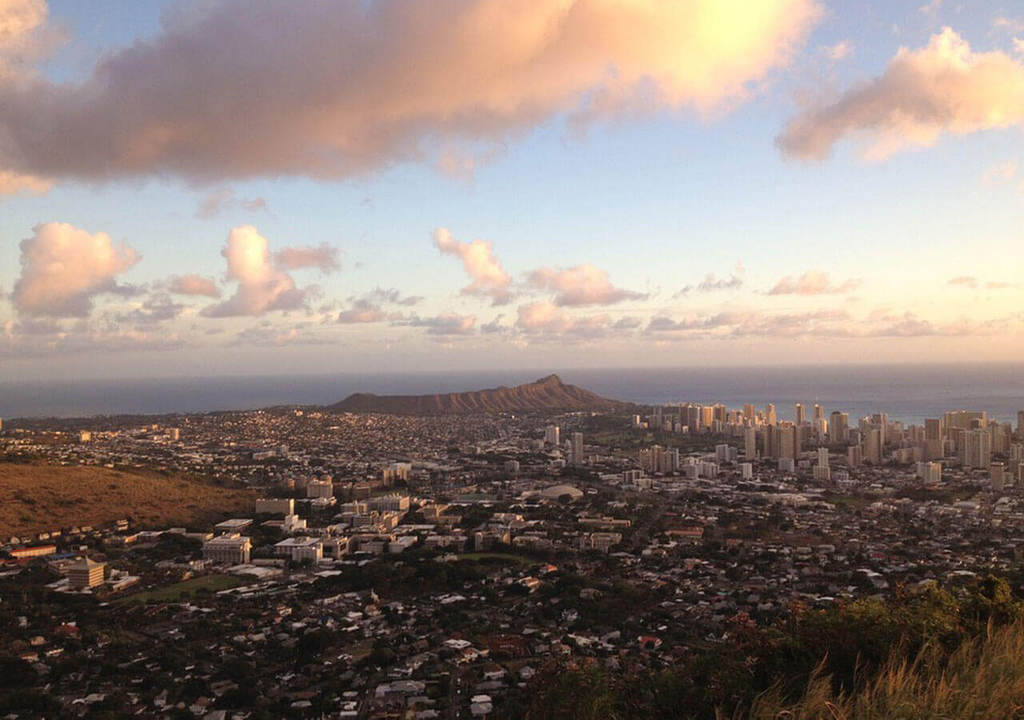 Aloha! Mahalo for visiting TheWingedFork. Today Leanne from Countries to Go has listed her deets of what you need to know before visiting the state capital of Hawaii – Honolulu in the mighty US of A 😉 Come with or without your keiki or ‘ohana, but you will find much ‘ono here. We welcome you with many a lei.

The Best View of Diamond Head is at Magic Island

The Diamond Head is a volcanic cone on O’ahu. Do you want to get the best view from Honolulu? Across the street from the Ala Moana Shopping Center in Honolulu is the Ala Moana Beach Park. Just to the right of that on a peninsula is Magic Island. It’s a great park and is bigger than anyone expected. If you look around sometimes you can see people taking their wedding pictures right on the beach with Diamond Head in the background. This is also where to get the perfect show. If you ask me, this is the beach to go to when in Honolulu.

It’s quite small, believe it or not. It has very little sand space and the next thing you know you’re in Kuhio Beach Park. The area itself is so commercialized outside of the beach. The best time to visit is sunset. Also, on Tuesdays, Thursdays, and Saturdays from 6:30-7:30 (6-7 November-January) is a free hula show. Other than that, try out different beaches instead, like Fort Derussy Beach Park has a much better view of Diamond Head.

The Best View of Honolulu is from Kaka’ako Waterfront Park

If you want to see the whole city of Honolulu skyline and another great view of Diamond Head, that is reserved for Kaka’ako Waterfront Park. I’m not going to sugar coat it, this park looks creepy. I’ve gone through it with my expensive camera during daylight hours without a problem. I’ve also been there at sunset without a problem, many times. The homeless here tend to stick to themselves. The view is worth the walk down the park, creepy people or not!

Go to Chinatown, Honolulu Around Noon

Do you want to eat real Chinese food? Chinatown is the place to go and most meals are way under $10 per person depending on where you go and what you want. There is also Korean, Japanese, Vietnamese, and Thai food around this area, or McDonalds if that’s what you want. The truth about Chinatown is it looks creepy. I’ve gone in broad daylight and have had nothing happen to me. Most stores are closed by 4 pm anyway, so it’s a good lunch spot. I wouldn’t go after dark though, same for Kalihi.

Visiting the USS Arizona at Pearl Harbor is Free

In addition to being one of the best summer vacation spots in the US, Hawaii is a place for history too. I know people who have worked for companies that get people to pay big money to see the USS Arizona. Don’t fall for that scam! Pearl Harbor is free to enter–unless you have a bag. Instead of any kind of bag check they make you pay $4 to store it. Wallets and cameras are allowed. If you don’t want to pay the fee, leave your bag at the hotel. Other than that, go head and get a free ticket to the USS Arizona. In the summer, tickets run out fast. It might be worth paying the $1 convenience fee online if you’re in Honolulu during the summer months.

The island of Oahu is mostly residential outside of Honolulu. That means almost all of the nearly 1 million people who live on the island all come to work in the city. They all come to shop in the city. They all come to get services done (haircuts, car repair, etc.) in the city. From about 7 am to 9 am traffic from everywhere is backed up coming into the city. Starting at about 3 pm to after 7 pm sometimes the traffic getting out of the city is a nightmare (especially during the school year!). I suggest staying off the road if you can at these times, or go the opposite direction.

The Aloha Tower is Underrated

No one ever goes there, and it’s free! I lived here for about 3-4 months before I even heard of its existence. From 9-5 daily going up to the 10th floor is open and you can see all of Honolulu harbor. Parking is metered, but so is everywhere else in downtown (Walmart has free parking on weekends!). It’s really a great view of all of the beautiful buildings and a great place to see how blue the ocean can really get.

The View from Mount Tantalas is Even Better

If you want to see all of Honolulu (and I do mean, all of it, not just the skyline or Diamond Head) head up to Mount Tantalas. Parking is extremely limited (there are only like 8 spots, so be careful) and the drive up us a tiny narrow road. Buses don’t go up there so this is only good if you have a car, or are willing to pay a taxi. A popular sunset spot, this area is a great place to see all of Honolulu, from east to west.

The Architecture is Interesting

That’s the best word I can use to describe it “interesting.” It’s like architects threw up on this place. If you know Hawaiian history, different cultures kind of did throw up on everything. One building will be Spanish, the next will be colonial New England, after that is a modern building, and after that it looks like China. That’s all in downtown and it doesn’t get any better anywhere else. Some buildings look like Asia, others look European, while some are brand new and shiney like in New York City. If you like archetecture, you’re going to be disappointed in Honolulu.

The Weather is Cooler Than You Think

Other tropical islands around the world are insanely hot, the air is stale, and humidity is above 90%. Hawai’i has winds coming through all the time. While it is humid, the temperatures are usually in the 70’s with the windchill. Honolulu is no exception. The buildings don’t stop much of the wind so while you’re walking you might want to hold on to your hats! While the temps don’t terrify you, it’s still quite warm and humid or bring shorts!

Hawai’i is known for rainbows. Many times it starts sprinkling under one cloud at a time, therefore creating a rainbow when the rest of the sky is clear. Don’t get me wrong though, the whole sky does have a tendancy to just open up and downpour too (as do all tropical areas). Do you randomly feel raindrops hitting you that isn’t mist from the rainy side of the island? Better look around, there is a rainbow somewhere.

About the Author : Leanne from Countries to Go

Leanne is the creator of the travel blog Countries To Go. She got the inspiration to travel the world when she was 12-years-old but she still had to finish middle school before she could start! Now she’s an adult and is about to go on her next adventures. She’s spend over a year in Honolulu, Hawaii discovering is secrets and looks forward to hearing all of you on social media, @CountriesToGo

Did you like Leanne’s post about Honolulu? What’s topmost on your list once you get there? If you have already been, what did you love and want added on here?

Other Popular Travel Posts to Read

1 thought on “What to Know About Visiting Honolulu, Hawaii”

This website uses cookies to improve your experience while you navigate through the website. Out of these, the cookies that are categorized as necessary are stored on your browser as they are essential for the working of basic functionalities of the website. We also use third-party cookies that help us analyze and understand how you use this website. These cookies will be stored in your browser only with your consent. You also have the option to opt-out of these cookies. But opting out of some of these cookies may affect your browsing experience.
Necessary Always Enabled
Necessary cookies are absolutely essential for the website to function properly. This category only includes cookies that ensures basic functionalities and security features of the website. These cookies do not store any personal information.
Functional
Functional cookies help to perform certain functionalities like sharing the content of the website on social media platforms, collect feedbacks, and other third-party features.
Performance
Performance cookies are used to understand and analyze the key performance indexes of the website which helps in delivering a better user experience for the visitors.
Analytics
Analytical cookies are used to understand how visitors interact with the website. These cookies help provide information on metrics the number of visitors, bounce rate, traffic source, etc.
Advertisement
Advertisement cookies are used to provide visitors with relevant ads and marketing campaigns. These cookies track visitors across websites and collect information to provide customized ads.
Others
Other uncategorized cookies are those that are being analyzed and have not been classified into a category as yet.
SAVE & ACCEPT
209 Shares
Share3
Pin206
Tweet
WhatsApp
Telegram
Email