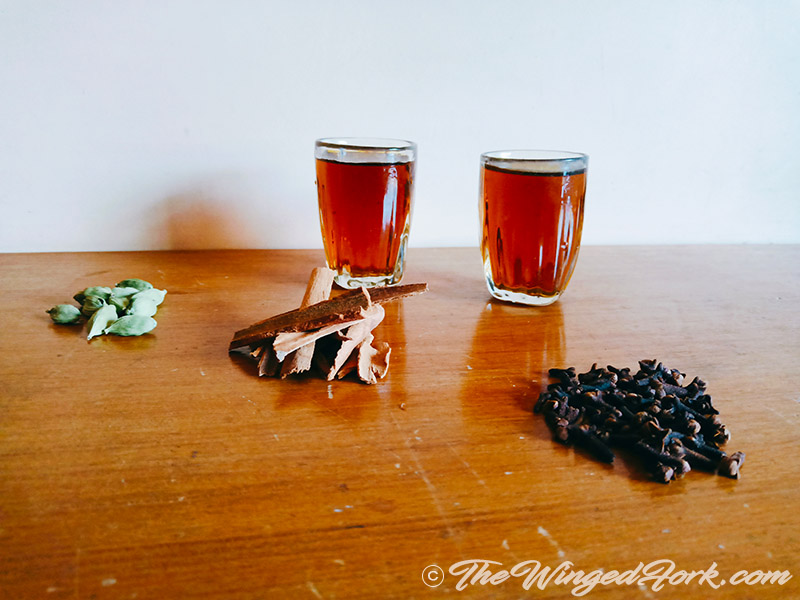 So some nights it’s really cold outside and you need a liquid to warm your bones. That’s when the East Indian kimad makes a warm entrance into the hearth and home.

Quite similar to mulled wine or brandy, the traditional East Indian kimad is a mix that keeps you warm on those cold winter nights. You’ll find a lot of it in every home come Christmas time or wedding season. This warm drink made with country liquor has spices such as cinnamon, cloves, and cardamoms in it; and more importantly a little bit of sugar and sometimes tea.

It tastes just like floating on warm clouds in heaven or some say like fire in your bones. Of course, that depends on who made the kimad and which base liquor they used in it. It’s normally made of country liquor from the tadgolla or jambul or sugarcane or coconut trees or others, but you can just replace it with brandy if you don’t have any.

I had a question about country liquors, so I went to one of our walking talking dictionaries in our family; my Uncle Jude. This is what he had to say.

Of the three major vices, wine & song were permitted on most festive occasions. The 3rd vice was practised in secret by juveniles & young adults and some ‘chalu’ older adults.

It was imperative to be discreet if indulging in levels above social boundaries. If caught, it meant physical abuse by a parent or jealous spouse!!!

Retaliatory abuse against social norms by guardians was not carried out in private forums. You could get slapped or slippered in full view of family, friends or neighbours.

There was no age barrier to receive corporal punishment by guardianship, nor segregation by concerned parties. The ideal modus operandi would be to flee the scene of discovery & return home much later to face the music in private audition with authority, rather than protest innocence within a circle of bystanders. What happened in circumstances like that was, if there were several aunties & uncles in the curious circle of bystanders, you might collect some slapping from a whole lot of judicial protesters.

EI communities were not as well developed in ethical reasoning as they are now. It was black & white in those developing times. If a married man was spied talking to a voluptuous miss at a secluded spot, the inference expressed in black & white was quite colourful!!!

Definitely not a case of innocent until proven guilty! This applied to both parties of the comprising situation.

To come back to the brewing skills of communal beverages, some families attained various levels of competency over others. Just as it was common to note that Aunty Nancy’s tongue Tambriad was the best in the village, & Dominick’s wife Mabel made really tasty mutton stew, it was also noteworthy to recognise that Phyllis Aunty’s Jambul stuff was funtastic & to die for! Literally.

To score an invite to one of Phyllis Aunty’s soirees like a christening or funeral wake was a social bonanza, more rewarding than even Christmas and Easter. You knew in advance what you were going to be served, just as these days, if you went to Adle’s house you knew you’d be getting the best scotch whiskey in the world!

Secret recipes for home-brewed beverages were a closely guarded secret. Mostly accidental, the winning concoctions might have simply have been the result of throwing some additional ingredients into the fermentation process, or the seepage from the septic tank, but in any case, the exact combinations were never shared.

The largest tree in front of a house always indicated the flavour of the served hospitality. For instance, if there was a Jambul tree at the frontage, it was a dead cert that the lifeblood that flowed within the patriarch’s veins was a deep purple, and the reason for that, was not because the teenage son had an affinity for music of the same name!

Written by the versatile Jude Fernandes who also wrote this Sorpotel Pav recipe.

It’s also a must-have at every East Indian umracha paani – the traditional celebration that’s similar to a stag or spinster party. And it’s doled out a lot along with the papri made of rice.

So if you are ever in Bombay, and you happen to stumble across an East Indian, get yourself invited over to their home for a drink of kimad and some lush tasting sorpotel or moilee with chitaps for dinner. Nope, you won’t find it in the stores!

Here’s the recipe for our version of the East Indian kimad, give or take a few ml.

Heat water with cardamom, cloves, and cinnamon. Average it out. For 2 cups of water, 4 elaichis or cardamom, 10 cloves and 2 sticks of cinnamon.

Once it starts boiling, add a teaspoon of tea and 4 tablespoons of sugar. Of course, the liquor tastes great without the tea too. We often skip it. It just depends on whether you want to go traditional or not.

Lower the flame, add in the country liquor or brandy and let it heat, but do not let it boil. For two cups of water, you can use anywhere from 150 ml to 300 ml of brandy depending on your tastebuds.

Strain and serve in chownis (chauvenees or traditional East Indian wine glasses.) Chownis are traditionally made of two sizes, 30 ml and 45 ml. We’ve got some that are way older than us, and use either size depending on the company and visitors. And then like every good East Indian say “Sukhala!” “To health!” “Cheers!” “To happiness”!

You can print off the list of ingredients and instructions to follow for making this recipe via the recipe card below (for home use only).

Did you love our recipe? Was it 4-star or 5-star? Please click on the stars or your review below! 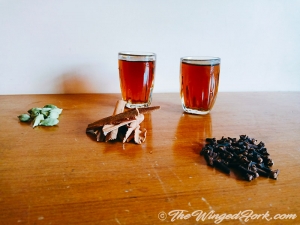 Abby
The heart warming traditional East Indian kimad liquor is similar to mulled wine but made with country liquour or brandy, cardamon, cloves, cinnamon, tea, and more.
5 out of 5 Stars by 6 readers!

*As an Amazon Associate I earn from qualifying purchases.

Disclaimer: Nutrition Information per serving is estimated by a third party software based on the ingredients used, and is for informational purposes only. It will vary from product to product, based on methods of preparation, origin and freshness of ingredients. Please consult the package labels of the ingredients you use, or chat with your dietician for specific details.

This website uses cookies to improve your experience while you navigate through the website. Out of these, the cookies that are categorized as necessary are stored on your browser as they are essential for the working of basic functionalities of the website. We also use third-party cookies that help us analyze and understand how you use this website. These cookies will be stored in your browser only with your consent. You also have the option to opt-out of these cookies. But opting out of some of these cookies may affect your browsing experience.
Necessary Always Enabled
Necessary cookies are absolutely essential for the website to function properly. This category only includes cookies that ensures basic functionalities and security features of the website. These cookies do not store any personal information.
Non-necessary
Any cookies that may not be particularly necessary for the website to function and is used specifically to collect user personal data via analytics, ads, other embedded contents are termed as non-necessary cookies. It is mandatory to procure user consent prior to running these cookies on your website.
SAVE & ACCEPT
723 Shares
Share661
Pin60
Tweet2
WhatsApp
Telegram
Yum