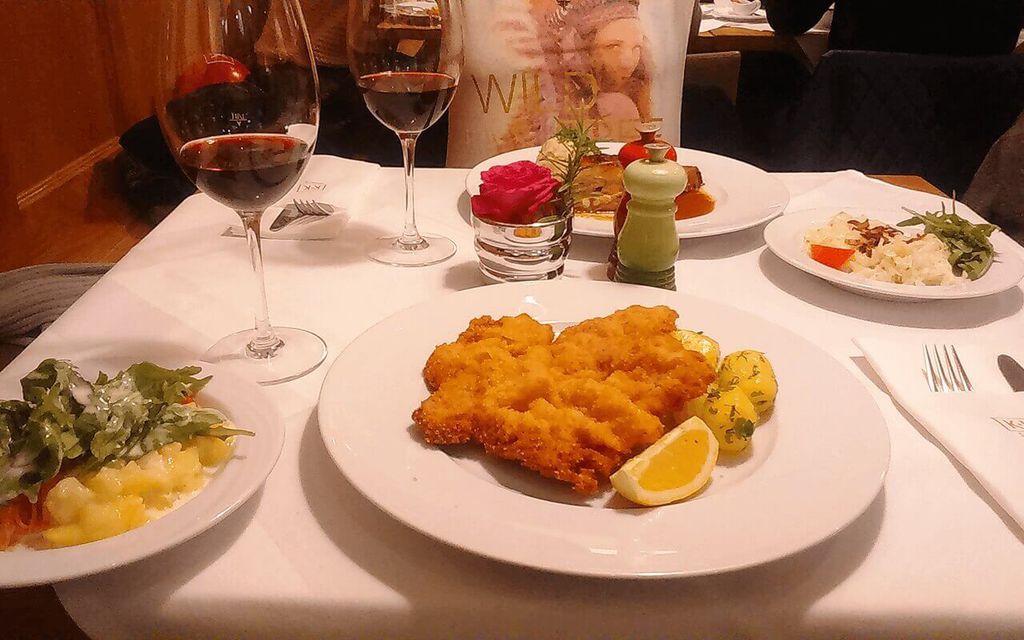 It was pretty late by the time we got into Salzburg on the Eurail and checked into our hotel, Der Salzburger Hof. It was hardly a 10-minute walk from the Salzburg train station aka Salzburg Hauptbahnhof; and thankfully we were in the main part of the hotel and not the annex. So smile 🙂

Anyway, by the time we showered and got out it was late. We walked to city centre and saw that almost everything was closed, except for the restaurants. So we walked around making note of everything we needed to see the next day, and then finally started looking for a restaurant.

Oops! It’s 9.15 pm. Most restaurants are ready to shut down or almost closed. The few that are open aren’t that interesting till we come across a group of guys singing with their beer outside a vintgage looking place opposite the Salzburg Cathedral. Maybe they’re celebrating something? We’re not really in the mood to walk through a group of what maybe drunk revelers, but considering there aren’t that many restaurants open right now, and faced with the choice of not getting food at all, and the rain that was starting to fall on our not-warm-enough clothing, we decide to go in.

We go in and as if they’re still serving. The waiters chatting with each other near the reception say they are, and find us a table for two next to a family with celebrating a kids birthday on one side, and a mother and daughter on the other.

First up we order the Blaufrankisch Gober and the Rosengarten wine. They were okay. We’ve had better wine before. We look at the food menu and realize we’re at the K+K am Waagplatz. We had stumbled across it while shortlisting places for our trip to Austria.

K + K represents Koller and Koller, a family run hotel since 1974. The decor is vintage and claimed to date back to 1181. It’s quite possible. The place is quite full, and on a weekday at that. There’s just two other tables that are empty.

The restaurant has a good ambience, and there’s some art on one of the walls that I wanted to take a picture of, but didn’t because there’s a large family sitting right in front of it. Thought about waiting till they left to take pics, but they were still there when we left.

I picked the Wiener Schnitzel vom Kalb and my sister picked the Schweinsbratl. The waitress tells her, ‘That contains pork.’ She says ‘So?’ She says ‘I didn’t know you could eat pork’. We wanted to ask who we were supposed to be, but just said we can, and she was off to place our order.

After about twenty minutes and another glass of wine our order came. Real Wiener Schnitzel is made from veal meat. This Wiener Schnitzel vom Kalb was deliciously tender, and perfectly fried. It came with parsley potatoes, lime, and a side of potato salad and of course jam. I think it was cranberry jam.

My sister’s Schweinsbratl was beautifully roasted with a rich sauce. She seemed to have got two different cuts of meat, that both tasted differently yum. Her side salad contained to-die-for sauerkraut and bacon shavings . We’re happy! We loved the taste of the food here more than we did in other parts of Austria.

It definitely is a must-visit when in Salzburg! We stopped to take a pic of their signboard after leaving. It looks rather royal, doesn’t it?

Where to eat in Top Global Cities

This website uses cookies to improve your experience while you navigate through the website. Out of these, the cookies that are categorized as necessary are stored on your browser as they are essential for the working of basic functionalities of the website. We also use third-party cookies that help us analyze and understand how you use this website. These cookies will be stored in your browser only with your consent. You also have the option to opt-out of these cookies. But opting out of some of these cookies may affect your browsing experience.
Necessary Always Enabled
Necessary cookies are absolutely essential for the website to function properly. This category only includes cookies that ensures basic functionalities and security features of the website. These cookies do not store any personal information.
Functional
Functional cookies help to perform certain functionalities like sharing the content of the website on social media platforms, collect feedbacks, and other third-party features.
Performance
Performance cookies are used to understand and analyze the key performance indexes of the website which helps in delivering a better user experience for the visitors.
Analytics
Analytical cookies are used to understand how visitors interact with the website. These cookies help provide information on metrics the number of visitors, bounce rate, traffic source, etc.
Advertisement
Advertisement cookies are used to provide visitors with relevant ads and marketing campaigns. These cookies track visitors across websites and collect information to provide customized ads.
Others
Other uncategorized cookies are those that are being analyzed and have not been classified into a category as yet.
SAVE & ACCEPT
50 shares