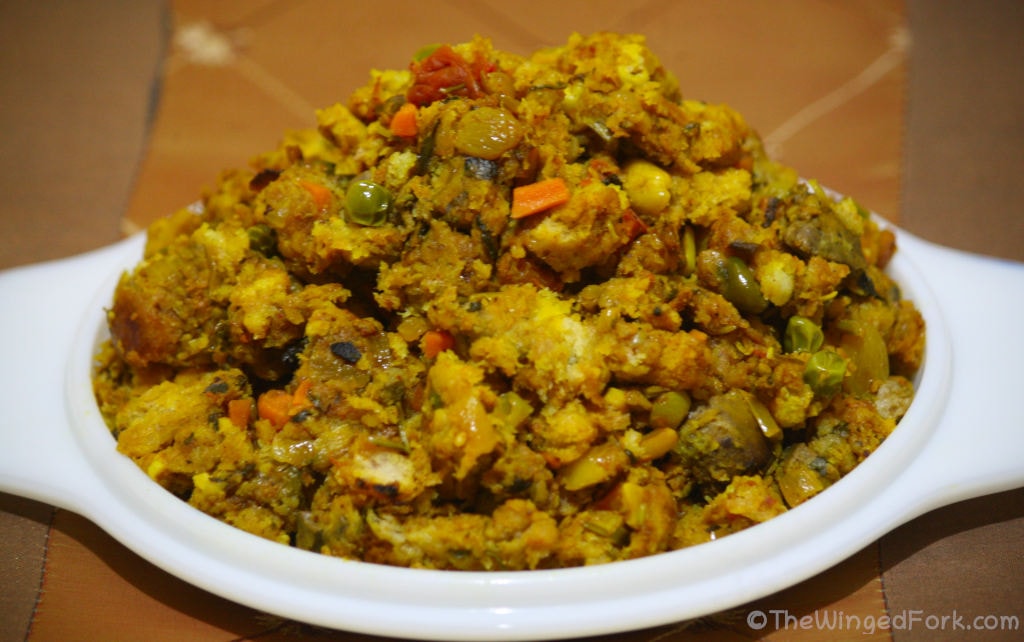 The traditional East Indian stuffing for Christmas meals consist of a chicken liver and bread pudding that’s stuffed into the chickens’ cavity before roasting. Here’s how to make this delicious homemade liver stuffing that’s sometimes called a giblet stuffing.

It’s a simple dish made of bread, chicken liver, other giblets, and veggies that is used to stuff the cavity of a chicken or any other bird or animal for big dinners.

We use liver pudding to stuff chickens or ducks for Christmas, or East Indian weddings, big birthdays and anniversaries, and other times of the year. It’s also the perfect dish to have for any important family function! As important as foogias and varias.

Liver pudding or pig stuffing is not that difficult to make, but tastes amazing! A dish we’ve loved for tiffin for work, and for family picnics, and for almost every other event! Try it yourself, and you’ll see why.

What Ingredients do you need to Liver Stuffing?

You will also need sour limes, oil for frying the bread cubes, and water to cook the liver. Apples, raisins, and roasted cashews are optional to richen the chicken stuffing dish.

How to make Liver Stuffing?

To make the liver stuffing, the first thing you need to do is boil the chicken liver, hearts, and stomach till cooked. When it has cooled down, cut the liver into small pieces. This can be done the previous day or a few days before as the entire cooking process is a bit long. That’s one of the things that make it worth it!

Also, remember to keep the liver broth, don’t discard it! You can use it later instead of water while frying the stuffing.

Boil carrots and green peas and when cool, dice the carrots into small pieces. Depending on when you plan on making the dish, you can prepare this a few hours in advance or the previous day as well.

Next cut the bread or loaf slices into one-inch cubes. Fry these bread cubes in oil or ghee and keep them aside for later use. You want the bread fried, but not too much. They should be semi-crunchy, but not nearly as crunchy as croutons.

The optional add-ons are apples, raisins, and cashews. We always add them because they make the dish a whole lot richer.

Deseed and cut the apple into fine pieces and remove any sticks or seeds from the raisins. Break the cashews into smaller pieces, and if you want more flavor, roast them.

After all the ingredients have been prepped, start with the cooking process. Heat oil or ghee in a kadai (deep round vessel or pot). Add the onions, chilies, ginger, and garlic, and saute these ingredients for a few minutes.

When the onions have slightly browned, add in the tomatoes and allow to simmer for a while. After the tomatoes add in the chopped chicken liver, boiled carrots, and peas. You can also add small pieces of bacon or salami, but this is optional. Mom adds it sometimes, but mostly she doesn’t. Mix all the ingredients well and allow to cook.

After a few minutes, add in the spices; turmeric, pepper powder, chili powder, and garam masala, and of course mix again. With our East Indian cuisine, we mix a dozen or two dozen times, or maybe more!

After mixing the spices, add the liver broth. Follow that with the diced apples, raisins, and roasted cashews. Lastly, add in the fried bread pieces and mix well.

Once all the ingredients have been mixed together, add the fresh coriander. Last but not the least, squeeze the sour lime juice onto the bread and liver stuffing.

After a few more minutes of cooking or frying, whatever you call it, your giblet stuffing is ready for use! Stuff this bread pudding in a whole chicken or pigling for a roast. The normal procedure is to fill the cavity of the bird or pigling and tie it up. The chicken or pig is then roasted. Once ready, the stuffing tastes a lot different because of the juices from the chicken, duck, or pigling. It really tastes amazing!

And if like us, you always make extra chicken stuffing; you can always eat this liver pudding as a meal by itself. I get mom to make the East Indian chicken liver stuffing on its own quite often. It’s just delicious!

I love it cold out of the fridge too! Tastes even better as a leftover snack covered with lime juice!

Stuffing is a mix of giblets, bread, veggies and spices used to fill in the cavity of a bird such as chicken, turkey, duck, or even a pigling.

What is traditional stuffing made of?

It varies from region to region; however, most include bread, rice and cavity organs.

Giblets are the edible organs of a bird such as heart, liver, gizzard, and the neck that are often used in various dishes.

You can print off the list of ingredients and instructions to follow for making this recipe via the recipe card below (for home use only).

Did you love our recipe? Was it 4-star or 5-star? Please click on the stars or your review below! 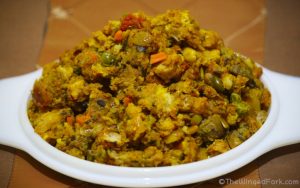 Abby
The traditional East Indian stuffing for Christmas meals consist of a chicken liver and bread pudding that's stuffed into the chickens' cavity before roasting. Here's how to make this delicious homemade liver stuffing that's sometimes called a giblet stuffing.
5 out of 5 Stars!

Slice and dice and keep ready to use later

To cook the Chicken Liver Stuffing

*As an Amazon Associate I earn from qualifying purchases.

Disclaimer: Nutrition Information per serving is estimated by a third party software based on the ingredients used, and is for informational purposes only. It will vary from product to product, based on methods of preparation, origin and freshness of ingredients. Please consult the package labels of the ingredients you use, or chat with your dietician for specific details.