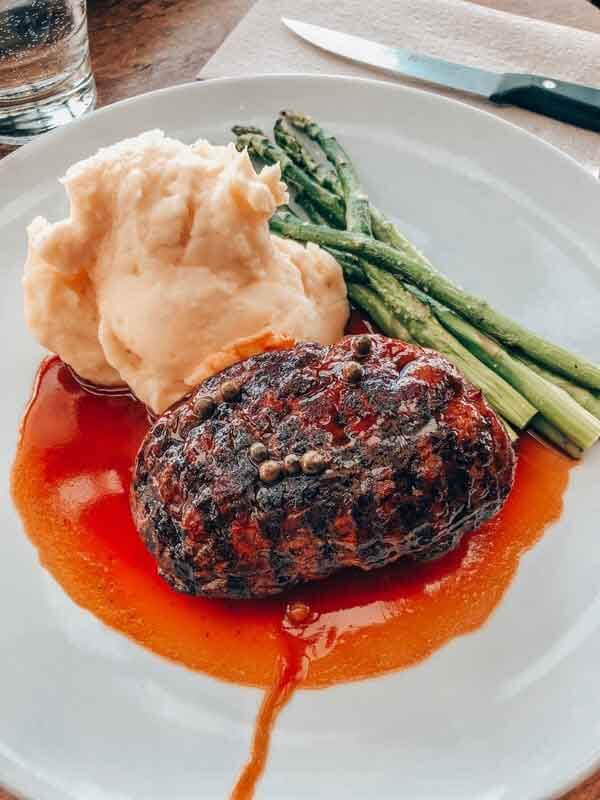 Alberta beef is one of the most popular foods from Canada’s northern province of Alberta. Alberta is also home to other iconic landmarks such as the beloved Banff National Park.

Alberta steak is produced in the province. They are ethically-raised and are antibiotic free beef. Internally it is rated AA or higher. You can easily order for Alberta beef at local restaurants, markets and food markets.

There are many local small businesses that have been working for generations producing A+ quality beef, that you can relish.

Beef (or cows) are abundant in Alberta, and generally in North America. Back in the old days, Alberta was not overly populated (it still isn’t as crowded as Toronto or Vancouver), and to encourage migration and settlement large pieces of land were provided to ranchers.

This led to new innovations in the field of irrigation and animal welfare. Many rural regions were set up, in a community format providing support. Today Alberta produces the largest number of cattle in the country, and it enjoys a supreme position of being a leader in agricultural technology in this discipline.

Alberta’s environment and climate also makes our beef tastier. Add to that a good diet for the animals.

If you prefer to eat lean meat, Alberta beef is perfect for you. It is 50% leaner than before, and is packed with essential nutrients.

As mentioned it is super easy to order Alberta beef in many restaurants in the province.

You can order steak (medium rare, usually fully cooked is my favorite) for a fulfilling dinner. For someone like me, it is a plateful for a lazy Saturday night dinner. It is usually served with a bed of fresh veggies or mashed potatoes. Order it with a pint of beer.

During summer months from Edmonton, Calgary to Banff National Park, you can indulge in food fests, where you can try out small bits of steak to give it a try. They are usually accompanied with some type of sauce.

You can purchase raw steak (including minced) from any supermarkets and use it whichever way you like – from curries, sandwich patty to BBQ.

So when you head to Alberta next, do try out our steak! I am sure you will devour it!

About Mayuri of Canada Crossroads

Mayuri is the creator behind ToSomePlaceNew and Canada Crossroads. An Indian-Canadian traveler and a historian (by qualification), she loves to capture historical and cultural nuances from all over the world, especially Europe. She travels with her husband and lives in Canada. Follow her on Pinterest!

More food posts for you!

This website uses cookies to improve your experience while you navigate through the website. Out of these, the cookies that are categorized as necessary are stored on your browser as they are essential for the working of basic functionalities of the website. We also use third-party cookies that help us analyze and understand how you use this website. These cookies will be stored in your browser only with your consent. You also have the option to opt-out of these cookies. But opting out of some of these cookies may affect your browsing experience.
Necessary Always Enabled
Necessary cookies are absolutely essential for the website to function properly. This category only includes cookies that ensures basic functionalities and security features of the website. These cookies do not store any personal information.
Functional
Functional cookies help to perform certain functionalities like sharing the content of the website on social media platforms, collect feedbacks, and other third-party features.
Performance
Performance cookies are used to understand and analyze the key performance indexes of the website which helps in delivering a better user experience for the visitors.
Analytics
Analytical cookies are used to understand how visitors interact with the website. These cookies help provide information on metrics the number of visitors, bounce rate, traffic source, etc.
Advertisement
Advertisement cookies are used to provide visitors with relevant ads and marketing campaigns. These cookies track visitors across websites and collect information to provide customized ads.
Others
Other uncategorized cookies are those that are being analyzed and have not been classified into a category as yet.
SAVE & ACCEPT
7 shares