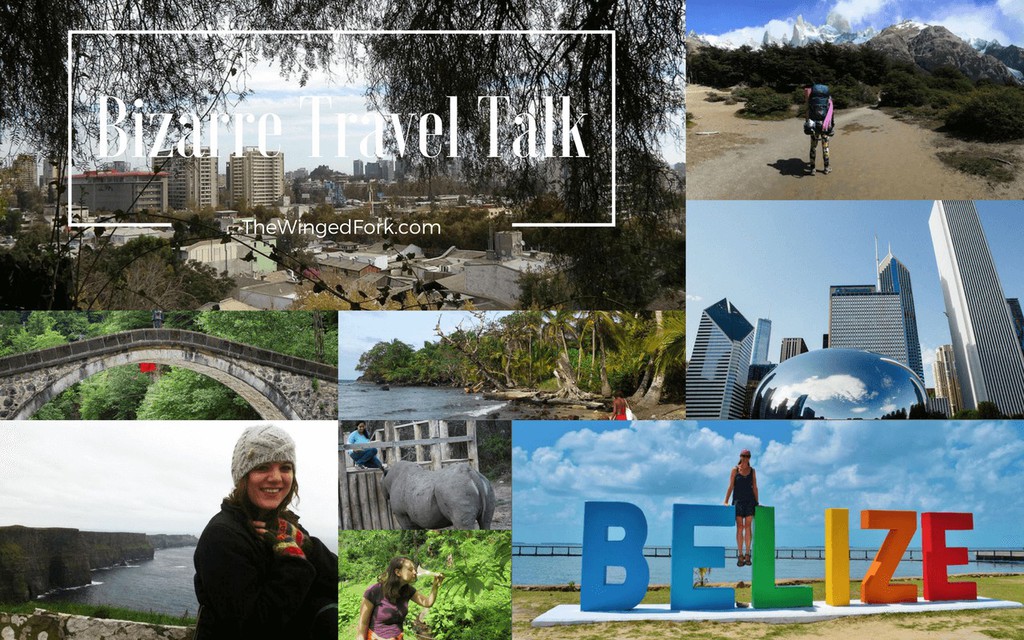 Travel exposes you to the strangest things – apart from discovering wonderful cultural diversity, behavioral differences, and contrary thought processes – one is also exposed to a range of novel and sometimes surprising situations. Take for example when I was in Cardiff a few years ago, and after ordering a Whiskey and Soda in a pub with my friends, I was told ‘You’re Indian, you don’t drink whiskey!’

Or another time when I was in Goa with my ex-boyfriend. We had just had a beer and then he said the weirdest thing he’s ever said to me. Nope, I can’t tell you what it is; I haven’t told anyone. But I am going to hang it over his head forever. Wink wink!

Well, there are funnier, bizarre or downright weird experiences that travelers have faced while passing through different countries. Let’s start with boobs for example. Amy from Two Drifters will tell you more.

“Are those real?” Regarding my boobs.

This was said to me in 2011 in Galway, Ireland, in a very cool music venue called Roisin Dubh (which I’d highly recommend). The young Irish bloke who said it was clearly quite inebriated as he stopped me in the stairwell. He wasn’t unfriendly, however, but it was quite silly and unexpected, a bit weird too. And what’s more, my boobs are not even that big!!!

Real Foodies Cook!
Take a local cooking course on your next travel adventure!

Becky from Becky the Traveller had somewhat of a different experience. Let’s hear it.

My last trip to Belize, I turned the big 40. I’ve always stayed in hostels and generally hung out with younger travellers, mainly because there aren’t any older ones. Ha ha! I’d been travelling with a girl from Canada who was 33 (she did have a very young face). Well I wasn’t too bothered about being the oldest until one of the ladies in the hostel asked me. ‘Are you her mum?’ Major complex issues followed and more face cream applied!!

Take a turn, and you meet other types of people, the ones that find you fascinating. Paroma from Year of The Monkey recaps.

This was when I was returning from Chicago to Minneapolis and my seat was next to this middle-aged guy. He was extremely besotted with me (I don’t know why, I am not the bewitching kind by any stretch of imagination), and constantly tried talking with me. At one point he said something which I will remember my entire life and which still gives me the creeps. It went like this “You are so cute! You are like a tiny puppy I want to take home to”. Ewwww! Bizarre!

And then there’s the other end of the spectrum, the ones with a one-track mind. Let Rosie from ClubElseWhere tell you about it.

You hear the strangest things while travelling, some good some bad. In certain places, catcalling is particularly irksome. I bought some food from a street vendor in Bocas Del Toro, Panama and while handing me my change he said, “Seriously, whenever you are ready for it, just call me” while looking down at his nether region. Nauseatingly, he also licked his lips while eyeing me up and down. I couldn’t get out of there fast enough.

Another fabulous catcalling experience one London afternoon was from a polite gentleman who asked what time I would like to be in his bed that evening. My refusal to answer his question irritated him and resulted in him yelling out “Well fuck off then, you’re not that fine anyway”. Whoever said chivalry was dead?

Real Foodies Cook!
Join a cooking class on your next travel adventure!

Talking about chivalry, Sarah from The Winged Fork encountered something akin to it in Kenya and Israel.

My first trip to Kenya in 2011 and I was travelling with my driver guide from Mount Kenya back to Nairobi. We made a pit stop at one of the local Masai Curio shops enroute just to stretch our legs. After browsing through the shop and buying a few items I headed back to the minivan. Peter my driver was still in the store. While I was waiting outside the van a local guy started chatting. He asked where I was from and what I was doing there and told me about a local village in the vicinity that he came from. The next thing I know, he was asking me if I would be willing to stay back and marry him! That was a first!

Another year, on the last day on an official trip to Jerusalem, Israel, I decided to head to the Old City to do some shopping. I entered through the Jaffa gate and stepped into one of the stores and bought a few bracelets of the Star of David, the menorah, some olive wood doves. While there I was chatting with the store owner who told me he was not from Israel, but from Jordan, and was only working there. I told him I was always interested in visiting Jordan but hadn’t had the chance to visit yet, which is when he asked me if I had a boyfriend and if I would be willing to stay in Israel and get married. It did come as a surprise, but that wasn’t the first time 😉

Okay, not so weird. Maybe he just wanted a beautiful wife. Lien from Get Lost Abroad tells of a similar experience in Tanzania.

An African guy approached me in Tanzania in the market and said I was beautiful (so far nothing special). He kept following me and he said he was really sure he wanted to marry me. I asked him to leave me alone and he said “Okay, I will sell my farm and go to the bank to request a loan so that I have enough money to maintain our future family”. Euhm okay, nice to meet you too 😉

This is one for the books. Stina retells her somewhat bizarre experience after returning from a backpacking trip.

All in a backpack

I recently got back from travelling around South America with my friend.  We gave away all of our possessions before we left and literally had our whole lives (everything we had kept) in our backpacks.  When we were checking into hostels or attending events and were asked for a “home address” we were often laughing and saying “we don’t have one?” We would be asked “where do you live?” And we would reply “in our backpacks” it became a little (well received) joke.

When I got back to the States I went to the bank. At the time I was just staying with a friend while I decided where to travel next. The bank teller asked me to confirm my home address, and I said “Oh, it’s changed from the one on the file”… he said “Oh, where do you live right now”. And on impulse I said “Out of my backpack”. He looked slightly taken aback and concerned, and leant forward discreetly whispering to me “Are you homeless?” It made me laugh so hard I felt sorry for the poor guy until I explained what I meant and he laughed too…

And then there’s the ‘Murder-she-wrote’ type of experience that Daniela from The Lost Romanian will tell you about.

I took a bus from Mendoza, Argentina to Santiago de Chile, crossing the Andes. A few adventures on the way, many hours delay, and I made a new friend. He was staying at a hostel in Santiago, very close to mine, so we agreed to meet the next day for a free city tour. We met and enjoyed a nice tour. At the end of it, we were a group of random travelers who decided to continue to walk together and have some drinks after. Nothing uncommon so far. I laughed a lot, I was very relaxed and totally enjoying the experience. It was already late when my “neighbor” and I took a long walk back to our hostels. He suggested to not take the main road, as we’ve already been there, but the small, little-illuminated streets. I thought it was a good idea.

At some point, he told me that he was having fun until I decided (for the both of us) to join those people. He didn’t like them at all. He then went on with details, and confessing he hates people, in general. I was very surprised. I asked, “Do you hate me?” He then replied “No!” and probably realized this was going the wrong way. He didn’t seem the aggressive type though.

I concluded he just had a bad day and was a bit angry. The other day, we met again at a hostel social event. We chatted for a bit, while he and his roommates were complaining about a noisy guy. He reminded me in a small voice, “You know I hate people”. I didn’t know how to react to it, just nodded.

Those moments were so weird to creepy. Otherwise, he looks like a cutie, and he’s a school teacher 🙂

Talking about unforgettable experiences, Karin from Girl Astray probably had the most bizarre one.

How often do you meet a terrorist? Perhaps more often than you think. While traveling in Turkey I have occasionally come across people sympathizing with violent acts of the Kurdish Workers Party – PKK, however, this particular encounter was a lot more intense than I would have liked. It was a rainy day when we hailed down a white Fiat with a grey-haired man behind the steering wheel.

We just carefully nod our heads, knowing we are not the target group of these people.

Suddenly, the man sharply turns the wheel and crashes against the guardrail. We slide on the wet tarmac and within seconds, my body flies out through the trunk, taking me closer towards the most dangerous moment of my life.

Have you had similar experiences? What was the weirdest or most bizarre thing someone ever said to you while travelling?