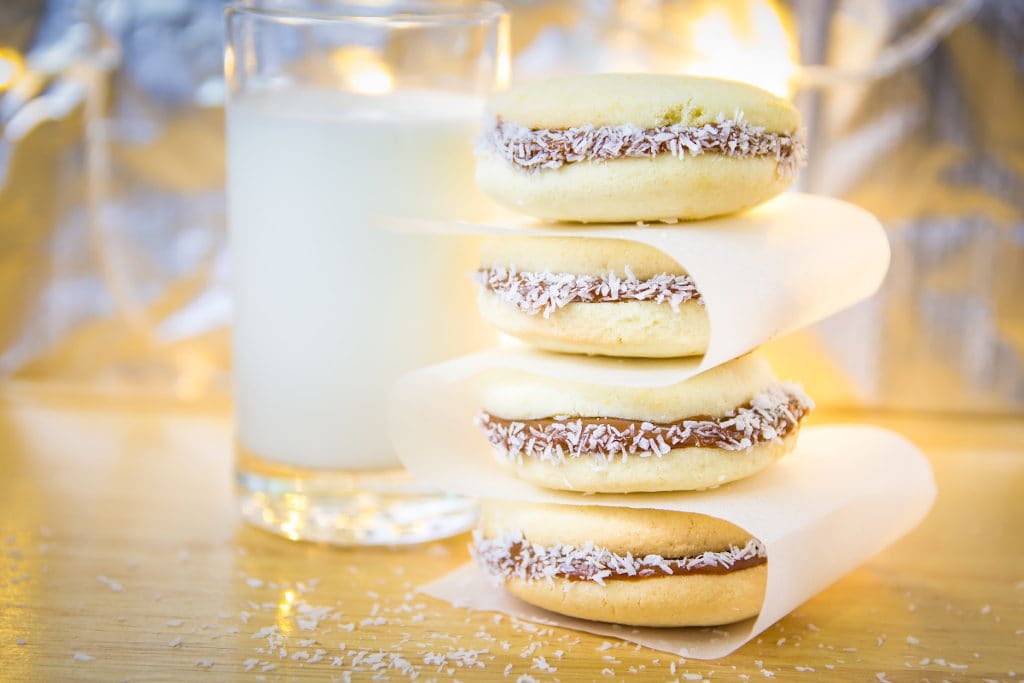 If you have ever tasted dulce de leche (milk caramel) and fell in love with this Argentine delight, you will love alfajores.

They are the most typical dessert or sweet snack in Argentina, just as popular as Apple Pie or Chocolate Chip Cookies in the United States; and they are intimately rooted in the local gastronomic culture.

You can find them in any corner of the country. More than 6 million alfajores are consumed in Argentina every day!

Its origin is very curious. The first alfajor recipes go back to the south of Spain, where the Arabs who invaded Andalusia between 700 and 1,400 A.C. brought their “al-hasú” (“the filling”), a sweet more similar to a soft nougat than an alfajor that was made with almond paste, walnuts and honey; and the were square. Then alfajores were introduced to the rest of Spain until at the time it crossed the ocean.

In Argentina, its first history was fried cakes stuffed with dulce de leche. The first sales are known to have been made by traveling African pastry chefs carrying baskets around their necks.

The alfajores are basically two fluffy cookies made from cornstarch, and joined with a layer of dulce de leche. In addition, coconut zest is usually put on the outside.

Dulce de leche is a dessert made with cow’s milk, sugar, vanilla essence and a pinch of baking soda.

The alfajores are very simple to prepare, and although their elaboration can be a little laborious, the result is worth it.

The classic alfajores have no coverage and are the ones that have been eaten in Argentine homes for centuries. But for years they have been making alfajores with chocolate topping (black, white and milk chocolaye), Italian meringue, and even fruit fillings, which intensify their flavor.

Other very famous brands of good quality alfajores are: Cachafaz, Jorgito and Balcarce. The Fantoche brand created the 3-layer alfajor in 1969. They are so delicious!

In Argentina, any excuse is good to have an alfajor. They’re perfect to accompany a rich mate, a tea, or even with a soft drink.

About Sara, the Author

Sara is a incessant traveler, foodie, mom of a 19-month-old baby and a cute miniature dachshund, and author of the food blog Deliciously Happy.

She shares easy, quick & delicious recipes for the whole family with few ingredients. And don’t forget desserts and cocktails! Follow her on Pinterest for more easy & healthy recipes. This website uses cookies to improve your experience while you navigate through the website. Out of these, the cookies that are categorized as necessary are stored on your browser as they are essential for the working of basic functionalities of the website. We also use third-party cookies that help us analyze and understand how you use this website. These cookies will be stored in your browser only with your consent. You also have the option to opt-out of these cookies. But opting out of some of these cookies may affect your browsing experience.
Necessary Always Enabled
Necessary cookies are absolutely essential for the website to function properly. This category only includes cookies that ensures basic functionalities and security features of the website. These cookies do not store any personal information.
Non-necessary
Any cookies that may not be particularly necessary for the website to function and is used specifically to collect user personal data via analytics, ads, other embedded contents are termed as non-necessary cookies. It is mandatory to procure user consent prior to running these cookies on your website.
SAVE & ACCEPT
46 Shares
Share17
Pin29
Tweet
WhatsApp
Telegram