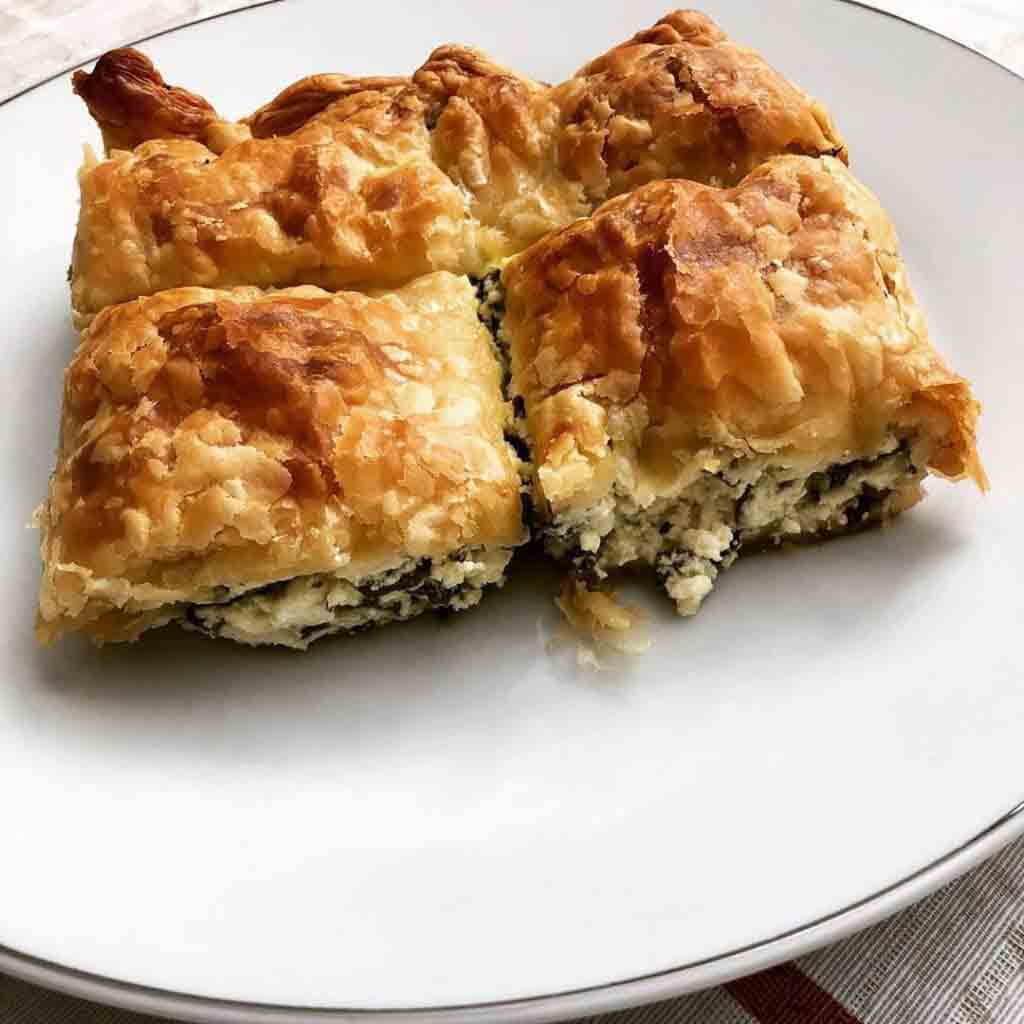 Spanakopita is a crumbly, rich filo pastry that is incredibly popular in Greece. The pastry comprises a sumptuous mixture of spinach, green onions, kefalotyri cheese, feta, and herbs.

The ingredients are mixed together and then wrapped into folded layers of pastry before being brushed with butter and olive oil and cooked in the oven.

Tracing the Origins of Spanakopita

The origins of spanakopita are not exactly known. However, the pastry can be traced back by at least 400 years in Greece.

It’s important to note that the Greeks did not gain independence from Turkey until 1821. Spanakopita can be compared to the Turkish pastry “ispanakli/Turkish spinach borek”.

A lot of popular Greek foods have origins in Turkish and Ottoman cuisine. A similar example is Greek coffee which is actually coffee that the Ottomans brought over from Constantinople.

Spanakopita is incredibly popular in Greece today. You will find the pastry served everywhere – in bakeries and coffee shops, as a starter meze in Greek tavernas, and in breakfast buffets at hotels. Greeks will regularly cook the pie in their homes too, and the dish is not as difficult to prepare as you may expect.

You can buy a generous slab of spanakopita from any bakery for around €1.70. These pies are incredibly filling and a great convenience snack for something to eat on-the-go. Spanakopitas are also regularly enjoyed for lunch at home with a serving of Greek yogurt for dipping in, or a side of Greek salad.

Attika bakeries are a chain of bakeries and coffee shops that you will find all over Greece. Despite being a chain, the quality is excellent. I like the spanakopita served here because the portions are so huge. Many independent family-run businesses serve pies that are just as good.  You can also wash it all down with a Greek iced espresso (Freddo espresso) while you’re there.

About Melissa from High Heels and a Backpack

Melissa Douglas is a full-time Travel Blogger from Nottingham, UK. She is based in Athens, Greece where she manages High Heels and a Backpack  – A solo female travel blog that focuses on travels off-the-beaten-track and in Greece. Melissa also contributes to several travel publications across the world, including Forbes Travel Guide, The Times of Israel, and Matador Network. Follow Melissa on Instagram @highheelsandabackpack